That Cézanne Is Mine, Suit Claims 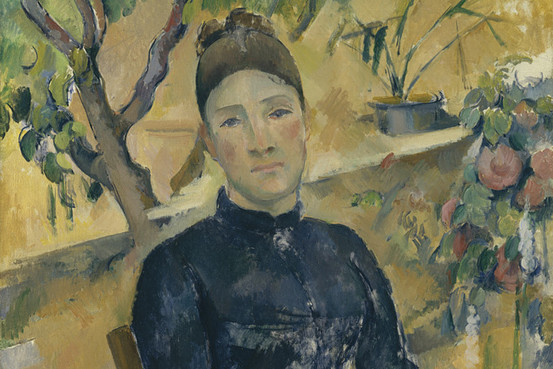 'Madame Cézanne in the Conservatory' was painted in 1891.

At issue is the provenance of Paul Cézanne's "Madame Cézanne in the Conservatory" (1891), which was bequeathed to the museum in 1960 by an art collector. Pierre Konowaloff, who says he is the great-grandson of the original owner, says he is the rightful owner of the painting, according to the lawsuit. The suit seeks recovery of the painting, as well as "monetary damages in connection with wrongful acquisition, possession, display and retention of the Painting."

According to the lawsuit, the collector who bequeathed the painting to the Met "almost certainly" knew that an illegal confiscation had wrested it from its original owner, Russian industrialist Ivan Morozov. The suit also accuses the museum of failing to properly investigate the provenance of the work during its acquisitions process. Mr. Konowaloff says he is Mr. Morozov's great-grandson.

"This goes to the heart of how these highly respected institutions acquire what they have and what responsibilities they have in getting them," said Allan Gerson, an attorney for Mr. Konowaloff.

Citing independent appraisals, Mr. Gerson estimated the painting's value at between $50 million and $70 million. But a longtime dealer of Impressionist and Old Master paintings, Richard L. Feigen, said the work might be worth more than $100 million. "There hasn't been a Cézanne like this on the market in quite a while," Mr. Feigen said. "They just don't exist on the market like this."

Mr. Konowaloff, an engineer, is engaged in another, nearly identical lawsuit accusing Yale University of wrongfully acquiring Vincent van Gogh's "The Night Café." That suit was filed in 2009. Yale has maintained that it has rightful ownership of the painting.

"The Night Café," like the Cézanne in question, was confiscated from Mr. Konowaloff's great-grandfather, according to the lawsuits. And, like the Cézanne, it was bequeathed by an art collector named Stephen Clark, a former trustee of both the Met and the Museum of Modern Art.

According to the complaint against the Met, the Cézanne painting changed hands several times prior to Mr. Clark's purchase of the work in 1933.

Looted by the Bolsheviks from Mr. Morozov, according to the complaint, it was then turned over to the Matthiesen Gallery in Berlin in an effort to conceal it from authorities, who might have otherwise flagged the stolen artwork. The suit notes that Matthiesen was cited as an entity "involved in looting art" in a 1946 report conducted by the U.S. Office of Strategic Services. (Patrick Matthiesen, who runs the Matthiesen Gallery in London and whose father founded a gallery of the same name in Berlin before moving it to London after the Berlin venue was taken over by Nazis in the mid-1930s, disputed the idea that his father's original gallery served as a transit point for confiscated art. He said that kind of activity might have occurred after Nazi occupation of the gallery forced his father to flee to London.)

Mr. Clark purchased the Cézanne through New York's Knoedler & Company gallery, according to Mr. Konowaloff's suit, which also claims that Mr. Clark directed Knoedler to "secretly purchase the painting for him," because he likely knew of the work's unlawful confiscation.

Knoedler officials did not immediately respond to requests for comment.

The Met, like all major museums, maintains an acquisitions process for all works—either purchased, gifted or bequeathed.

During the process, the Met researches an artwork's ownership history and exhibition history, as well as the countries in which the work has been located, among other factors, according to the museum's collections management policy.

"For all acquisitions, the Museum shall make a rigorous effort to obtain from sellers and donors all available information and accurate written documentation with respect to the ownership history of the work of art," the policy says.

The ownership history listed for the Cézanne on the museum's website, for example, says the artist sold the work, along with another of his paintings, to Mr. Morozov in 1911. The work was acquired by Moscow's Museum of Modern Western Art in 1918, according to the Met's information, and sold through Knoedler to Mr. Clark in 1933.

For bequests, such as the Cézanne, the Met's policy requires the curator advocating on behalf of the artwork to file a report that includes "a description of the work, its condition, publication history, importance to the Museum's collection, justification for acceptance, and provenance."

Write to Chris Herring at chris.herring@wsj.com and Erica Orden at erica.orden@wsj.com