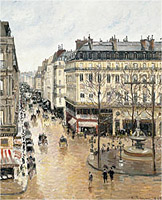 (CN) - A full 9th Circuit panel refused to dismiss a lawsuit brought by a California man who wants Spain and one of its museums to return a painting by French impressionist Camille Pissarro that he claims was looted by Nazis in 1939.

Spain and the Thyssen-Bornemisza Collection Foundation appealed a federal judge's decision allowing Claude Cassirer to sue for the return of a Pissarro oil painting, "Rue Saint-Honoré, Après-midi, Effet de Pluie." He says Nazis forced his grandmother to sell the painting for $360 before she fled the country.

The painting ended up in the private collection of Baron Hans-Heinrich Thyssen-Bornemisza, who leased it to Spain in 1988 for $50 million. Five years into the 10-year lease, Spain paid the museum $327 million for the whole collection.

When Cassirer discovered that his grandmother's painting was on display in a museum in Madrid, he sued to get it back, claiming the painting had been taken in violation of international law.

Spain and the museum asked U.S. District Judge Gary Feess to dismiss the case for lack of jurisdiction, arguing that Spain's sovereign immunity protected from litigation in the United States.

Judge Feess rejected this claim and allowed the case to proceed.

An 11-judge panel of the federal appeals court in San Francisco agreed that the defendants are not immune.

"We conclude that Cassirer's suit falls within the 'expropriation' exception to sovereign immunity, which means that the courts of the United States have subject matter jurisdiction to entertain it," Judge Pamela Rymer wrote.

International law does not require that Cassirer's complaint be against the group that actually took the painting, the majority noted.

"Two wrongs do not make a right, and, notwithstanding the Nazis' campaign of genocide against Jews and theft of their property, if Spain was not complicit in the Nazis' taking of the Pissaro, I do not believe that our Congress would have intended its loss of sovereign immunity," Gould wrote.