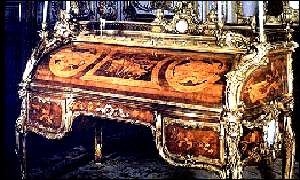 Jean-Henri Riesener made furniture for the Versailles palace

A collection of art looted by the Nazis from the Rothschild family is on show in London, before it is expected to fetch £25m at auction.

Christie's is selling the 250 paintings, sculptures, and items of furniture after the eldest descendant of the family, Bettina Looram, decided to auction them off.

The Austrian government had to give its permission for the works to be exported - it is thought they could fetch twice as much on sale in London as they could in Vienna.

The collection belonged to the enormously wealthy Barons Louis and Alphons de Rothschild. The SS looted it in March 1938, less than 24 hours after Hitler annexed Austria.

Due to be shown at Hitler museum

Historians believe they were to go on show at a proposed museum in Hitler's home town of Linz.

Baron Alphons managed to escape from Nazi Austria - but his brother was caught by the SS and spent a year in prison.

They received their artworks back after the collection was found by American GIs hidden in a ski resort in the Austrian Tyrol.

The collection includes 31 Old Masters, including a Frans Hals portrait of Dutch merchant Tieleman Roosterman, expected to fetch up to £3.5m.

Christie's Old Masters specialist Alexander Hope said: "Hals is a master of characterisation. For this painting to come onto the market like this is extraordinary."

Other paintings include a portrait of Archduke Leopold Wilhelm by David Teniers, and a set of 17th century Dutch landscapes by Jacob van Ruisdael.

There is also furniture by Louis XVI's cabinet maker Jean-Henri Riesner, whose works have previously fetched over £4m at auction.

Suits of armour are also included in the collection, as are 16th century musical instruments, astronomic and mathematic instruments.

The medieval Rothschild Book Of Hours is also included in the sale - it alone is worth as much as £3m.

The works are on show at Christie's auction house in St James's, London until Thursday, and will be sold there on 8 July.