For more than two decades the heirs of a world-renowned Jewish collector have been petitioning the Hungarian government to return more than $100 million worth of art, most of which has been hanging in Hungarian museums, where it was left for safekeeping during World War II or placed after being stolen by the Nazis and later returned to Hungary.


David de Csepel, who is suing to regain custody of family artwork taken during World War II, at home in Los Angeles.

The requests have been rebuffed, as have appeals to the government from current and former United States senators, including the Democrats Christopher J. Dodd, Hillary Rodham Clinton and Edward M. Kennedy. Finally, in 2008, a Hungarian court ruled that the government was not required to return the art.

Now, in what experts say is the world’s largest unresolved Holocaust art claim, the heirs of the Hungarian banker Baron Mor Lipot Herzog have filed a lawsuit in United States District Court in Washington demanding the return of the art collection they say is rightfully theirs. The lawsuit has been filed against Hungary and several museums that it oversees. 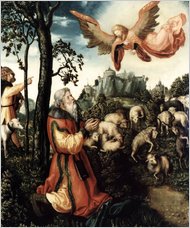 The suit, filed on Tuesday, includes an unprecedented twist: in addition to the more than 40 artworks explicitly identified in the filing — including paintings, sculptures and other works by masters like El Greco, Lucas Cranach the Elder, Zurbarán, van Dyck, Velázquez and Monet — lawyers are also asking the Hungarian government for an accounting of all art from the Herzog family in its possession.

“It’s a very emotional subject,” David de Csepel, a great-grandson of Baron Herzog who lives in Los Angeles, said of the collection’s fate in a telephone interview. Mr. de Csepel, who said he was speaking on behalf of about a dozen relatives, explained that this lawsuit had come after decades of frustration with the Hungarian government. “I want to see justice done. My great-grandfather was one of the most famous collectors in all of Europe. His passion and love of art is well known.”


Herzog Family Archive
El Greco’s “The Agony in the Garden.”

Mr. de Csepel, 44, remembers hearing about the art from his grandmother when he was a boy growing up just outside of New York. “It was something she held dear to her,” he said. “She got a hold of a book of the collection from one of the museums, cut out the pictures and hung them around her apartment.”

Michael S. Shuster, a lawyer for the Herzog family, said that Hungary had been “one of the countries that has been the most recalcitrant” about returning looted art.

“While other countries have cooperated,” he said, “Hungary has been bucking that trend.”

Gabor Foldvari, Hungary’s deputy consul general in New York, said in a telephone interview that it was not a question of Hungary’s refusing to cooperate but that, in the case of the Herzog heirs, “it was not the government’s decision, but the court’s decision” to keep the art.

Hungary is not the only country with looted Herzog art. Over the years the family has made legal claims in Poland, Russia and Germany, seeking the return of art and objects seized during and after World War II. This year the German government returned three works: an 18th-century snuffbox said to have belonged to Frederick the Great; a painting by Zeitblom, a 15th-century German artist; and a 1545 portrait by Georg Pencz, which the Herzogs sold at Christie’s in London this month for $8.5 million. That money is being used to support the heirs’ litigation, according to Mr. Shuster and Charles A. Goldstein, counsel to the Commission for Art Recovery, a 13-year-old nonprofit organization that helps victims of Nazi art thefts. (Asked if the Herzog heirs were planning to auction some or all of the collection if art were returned, as many families in similar situations have done, both Mr. Shuster and Mr. Goldstein said nothing had been decided.)

Part of the family’s frustration, Mr. Shuster said — and one reason the lawsuit requests a Hungarian inventory — is that it appears impossible to know just how much art is actually missing. Russia, for example, where some family members filed a lawsuit in 1999 that is still pending, is believed to have a number of works by artists including El Greco, Goya and Renoir that were stolen by the Nazis and then seized by the Soviets in Germany. Those works may be just a small segment of what was lost.

And in Hungary, the Herzogs believe, there may be many more than the works named in the suit, which are valued at a total of about $100 million. (That figure was arrived at after asking dealers and auction-house experts to value the property from photographs and visits to some of the museums.)

“About 12 years ago I was put in touch with one of the Herzog heirs through friends,” said George Wachter, who runs Sotheby’s old master paintings department worldwide. “And I was asked to go to Budapest to meet with their lawyer and look at” several paintings. Mr. Wachter took the trip and described the art he saw as “good, solid, quality pictures,” adding, “I can understand why Hungary wouldn’t let them go.”

Before this latest lawsuit, the heirs tried to compromise with the Hungarian museums. “Fifteen years ago the family offered to split the paintings with the government, and they turned them down,” Mr. Goldstein said. “Germany and Austria have come to terms with this issue, but Hungary has not. They have refused to take responsibility.”