An Austrian government council recommended that two 16th-century Dutch altar panels, two paintings and two statuettes seized by the Nazis should be returned to the heir of their Jewish prewar owner. 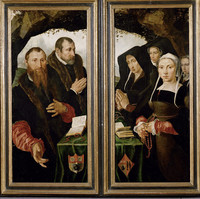 The council today recommended that the items be restituted from the Kunsthistorisches Museum in Vienna to Thomas Selldorff, 82, the Boston-based grandson of Richard Neumann, a textiles industrialist who was forced to flee Austria in 1938. Selldorff said he wants to keep the art in the family.

“We are very happy, it’s a wonderful thing,” Selldorff said by telephone from the U.S. “It is great to have a tangible thing to pass on from my grandfather, and to be able to do it while I am still alive. We are enormously grateful.”

Austria set up the Commission for Provenance Research in 1998 after 44 countries agreed on non-binding principles to return Nazi-seized art in public collections to the prewar owners or their heirs. The commission passes its findings to a council, which makes recommendations to the culture minister.

The council in 2005 rejected Selldorff’s claim, saying it couldn’t restitute works for which compensation had already been paid. Yet an amendment easing restitutions, passed last year, paved the way for today’s decision.

The altar panels, by the Dutch painter Maerten van Heemskerck, are the most valuable of the objects to be returned. A Heemskerck painting sold for $360,000 at Sotheby’s in London in July 2008. The two paintings are by Giovanni Battista Pittoni and Alessandro Magnasco, and the two religious statuettes by Alessandro Algardi.

A passionate collector, Neumann amassed more than 200 art works in his Vienna villa. He escaped Austria after the Nazi annexation via Switzerland to Paris. When the Nazis occupied France, he fled by foot through the Pyrenees to Spain. From there he reached Cuba, where he settled, and participated in the 1954 founding of an art museum in Havana. He later moved to New York to be with his daughter, and died there in 1961, age 82.

Neumann’s artworks were seized by the Nazis, then released shortly afterward to allow a sale to the Kunsthistorisches Museum in Vienna. Neumann’s daughter sold the altar panels in 1938. The money went into a frozen account to pay Neumann’s “emigration tax.”

After the war, Neumann sought restitution of the artworks. The Kunsthistorisches Museum insisted that he refund their purchase price, regardless of the fact that he never got the money. Neumann was prepared to pay as the only means of retrieving his property. Yet a ban on the export of cultural goods prevented him from taking possession of the altarpieces.

In 1952, Neumann, who was then a textiles worker in Cuba, lodged another complaint against the Kunsthistorisches Museum. The museum offered compensation: Instead of the altarpieces, paintings and statuettes, Neumann could have other, less valuable works and $3,000.

“The compulsory repayment of a fictional purchase price, together with the export ban, forced Neumann to accept compensation that was disadvantageous to him just to get back a part of what was taken from him,” said Sophie Lillie, a Vienna-based art historian who researched the provenance of the artworks. “Austria used his extreme desperation to its own economic advantage.”

Under the terms of today’s decision, Selldorff will have to return the original compensation paid to his grandfather.
Klimt Claim

At today’s meeting, the commission rejected a restitution claim for Gustav Klimt’s “Mohnwiese” (Poppy Field, 1907). The painting belonged to Fritz Zuckerkandl, the son of a famous anatomist and his wife, Berta Zuckerkandl, a well-known society hostess and intellectual who counted Klimt and Auguste Rodin among her friends.

Zuckerkandl emigrated to Paris in 1935, and his family followed in 1938, after Hitler’s annexation of Austria. Their possessions were seized by the Nazis and sold.

After the war, “Mohnwiese” was restituted to the family, though was also subject to an export ban. Zuckerkandl sold the painting to Rudolf Leopold, the founder of the Leopold Museum. Leopold swapped it in 1957 for two works by Egon Schiele with the Oesterreichische Galerie, now the Belvedere, where “Mohnwiese” hangs today.

The commission said that under the new law, it can only recommend the restitution of works that were returned but subject to the export ban in cases where there was a clear intention to keep the art in public collections. That was not the case with “Mohnwiese,” it said.

To contact the editor responsible for this story: Mark Beech at mbeech@bloomberg.net.