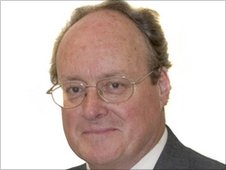 Sir Andrew was British Ambassador to Israel from 1992 to 1995

A former UK ambassador to Israel has been named as the government's first envoy for post-Holocaust issues.

Sir Andrew Burns has held a number of positions during his diplomatic career and is a former chairman of the Anglo-Israel Association.

Foreign Secretary William Hague said part of the job would be to "make sure the lessons of this terrible period in our history are never forgotten".

Sir Andrew said he was "deeply honoured" to have been appointed.

He will be involved in a wide-range of Holocaust issues including the implementation of a multi-state declaration on the restitution of looted Holocaust-era assets.

Six million Jews were murdered in the Nazi Holocaust during World War II.

Mr Hague said the UK was "determined to preserve the memory of the Holocaust for future generations".

"Sir Andrew's appointment will ensure we continue to support those working to right past wrongs and remain at the forefront of international discussions, to make sure that the lessons of this terrible period in our history are never forgotten," he said.

"Sir Andrew's wealth of experience means he is ideally placed to tackle the challenges this post presents."

Sir Andrew, a former BBC governor, said: "The UK already plays a leading and active role in promoting Holocaust education, remembrance and research, in tackling and resolving outstanding issues and claims, and in raising public awareness of the continuing relevance of the lessons and legacy of that terrible moment in European history."

He said he wanted to talk to a wide range of experts about all of the issues involved to "develop a properly co-ordinated and strategic way forward in international discussions".

Anne Webber, co-chair of the Commission for Looted Art in Europe, and Michael Newman, director of the Association of Jewish Refugees, welcomed the appointment.

In a joint statement, they said: "We have worked closely with the government to achieve this historic post, and very much look forward to working with Sir Andrew at this crucial time with several post-Holocaust issues requiring urgent attention and decisive leadership."

Sir Andrew was British ambassador to Israel from 1992 to 1995 and resigned as chairman of the Anglo-Israel Association in 2005.