A portrait seized by the Nazis in 1941 and only returned to the owners last year is now set to fetch up to £18 million at auction in London. 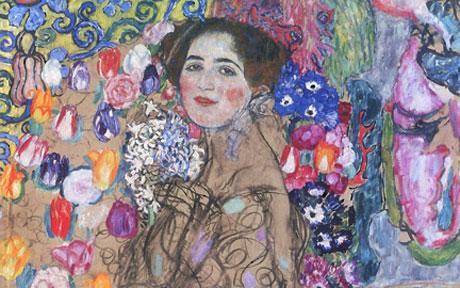 Gustav Klimt painting 'Frauenbildnis (Portrait of Ria Munk III)' is expected to fetch up to £18 million at auction after being returned to its owners by an Austrian museum.

The full length study shows a wealthy young girl who shot herself after a lover’s tiff. It was painted by Gustav Klimt (1862-1918), a leading Viennese artist at the turn of the 20th century.

His most important patron was Serena Lederer whose niece Ria Munk committed suicide after falling out with her lover in December 1911.

Her mother Aranka commissioned Klimt to paint a deathbed portrait of the girl. His first two efforts were rejected by the family – the second version was subsequently altered and is now in New York.

He began the third version in 1917. It shows Ria in repose against a richly decorative background typical of the artist’s work.
Klimt died the following year and the painting subsequently hung in the Munks’ lakeside villa at Bad Aussee, Austria until 1941.

The house and contents were then seized by the Nazis and the family ejected from their property because they were Jewish.The portrait passed to William Gurlitt, an art dealer. The picture entitled Frauenbildnis (a portrait of Ria Munk III) was donated to a gallery in Linz with other pictures in 1953.

It subsequently became the Lentos Museum where the portrait remained until last year when it was voluntarily returned to the heirs of the Munk family who have now sent it for sale at Christie's on June 23.

Giovanna Bertazzoni, head of impressionist and modern art at the saleroom said the picture was only the second or third comparable example of the artist’s work to be offered at auction over the past 20 years.