April
The Art Newspaper 6 May 2010
By Martin Bailey

LONDON. A 500-year altarpiece by Friedrich Pacher has recently been reassembled and will go back to the Alpine village for which it was commissioned. The wings were lost in the mid 19th century and have been purchased after a Nazi-era restitution case. 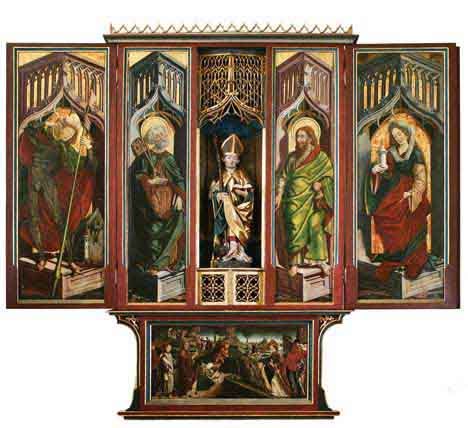 Dating from around 1480, the St Korbinian altarpiece has now been restored and is on temporary display in Vienna’s Belvedere gallery (until 18 July), before it returns to the pilgrimage church in Assling, in East Tyrol.

The panels were made by Tyrolean painter Friedrich Pacher. In the centre of the altarpiece is a sculpture of St Korbinian by Hans Klocker. The 3.5m-high ensemble remained on Assling’s high altar until 1660, when a baroque altarpiece was installed, and the earlier one was moved to a side wall.

Between 1850 and 1864 the double-sided wings were removed, and presumably sold off. In August 1927 its predella with scenes of the life of St Korbinian was stolen, but was recovered two months later.

It was not until 1999 that the wings were identified by German art historian Ulrich Söding. They were then on loan from the Dutch state art collection to the Stedelijk Museum in Zutphen. Further research revealed that by the early 1930s they were at St Ignatius College in Valkenburg, near Maastricht. The double-sided wings had already been separated, creating four panels, of which two had also been cut down at the top and bottom. In 1936 the wings were bought by Amsterdam dealer Jacques Goudstikker, whose collection was subject to a forced sale by the Nazis in 1940. The panels then went to Hermann Göring’s hunting lodge at Carinhall (and were returned to the Netherlands after the war).

In 2006 the Dutch government restituted the Goudstikker paintings to his heirs, who consigned most of them to Christie’s in 2007. The two pairs of wing paintings were sold as different lots, which means that they might have become separated after more than five centuries. The outer pair fetched £24,000 and the inner pair £192,000. Both were bought by the Tyrol authorities.

Conservation of the wings has proved complex. The double-sided wings had been sawn in two, and the wooden panels had then been thinned and later mounted on a chipboard support. The previous restoration, in 1963, was very poorly done, and retouched colours had aged and whitened, leaving blotches.

At the Vienna conservation studio of the Bundesdenkmalamt (federal monument office) the ensemble was examined with x-rays and infrared reflectography, revealing Pacher’s underdrawing. The panels were cleaned and the damaged 1963 retouchings were removed and redone. The two which had been cut down were brought back to their original dimensions, with modern additions. The wings were then inserted into new frames, so that they can be displayed as originally intended.