April
The Times 24 June 2009
By Ben Hoyle, Arts Correspondent
The eventful history of an Impressionist painting stolen by the Nazis entered another controversial chapter last night when it was removed from sale an hour before the auction began. 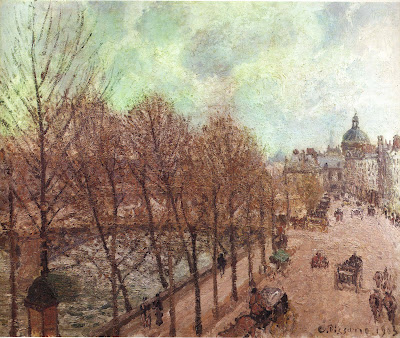 The view of the Seine, painted in 1903, was expected to fetch £1.5 million at Christie’s in London, but today it remains unclear who will pocket the proceeds of any eventual sale.

The confusion arises from its history, which has included a lengthy stay in a Swiss bank vault and a bitter row between the descendants of one of Germany’s most illustrious publishing families culminating in last night’s stand-off.

It is all rather at odds with the peaceful Parisian spring scene that Pissarro captured from the window of his room on the third floor at the Hotel du Quai Voltaire, looking down the Left Bank towards the Pont du Carrousel. He died a few months after completing it and the painting’s convoluted journey began. In 1907 it was sold to Samuel Fischer, the Jewish founder of the important German publishing house, Fischer Verlag, which numbered Thomas Mann, Hermann Hesse and Franz Kafka among its authors.

After Fischer’s death in 1934 and against the backdrop of the rise of National Socialism, the painting was smuggled into Austria where it hung in the Vienna dining room of his daughter, Brigitte, and her husband, Gottfried Bermann. Four years later, the night before Hitler’s army marched across the border, the family fled Austria. Gestapo agents who came for the art collection a few days later knew what they were looking for and the Pissarro was sold with an El Greco, a Cézanne and a Gaugin at an auction in Vienna in 1940.

After the war Gottfried Bermann-Fischer, as he now called himself, successfully retrieved many of the looted works from the family’s collection through US restitution processses but the Pissarro never showed up.

His daughter Gisela, a former actress, continued the search and after the intervention of a pair of shady middlemen and a battle of lawyers’ letters with Bruno Lohse, 95, an art dealer who had been appointed by Hermann Goering to loot treasures in occupied France, tracked the painting to a bank vault in Zurich in 2007. It was returned to her on a court’s order but not before she had spent 500,000 Swiss francs recovering it.

Ms Bermann-Fischer, 80, said before last night’s sale that retrieving the painting had been “about putting things in order” but that she had “invested such a tremendous amount over the past 13 years, so much energy and so much of my finances that it would be frivolous to keep it”.

Then a New Yorker arrived in London disputing her right to sell it. Itai Shoffman, 38, is Gisela Bermann-Fischer’s nephew, the great grandson of Samuel Fischer, the publisher, and the representative of family members who feel unfairly excluded from the glamour and wealth associated with the Fischer name.

“On the seesaw of life this side of the family has been more on the down side than the up,” Mr Shoffman said.

Brigitte Fischer was one of three children born to Samuel and Hedwig Fischer. Gerhart, the eldest, died in 1913, but Hildegard, the youngest lived to 2005, dying “a complete pauper”.

According to Mr Shoffman, her grandson, Hildegard Fischer was the “black sheep of the family”. She had a disability and by the time she and Hedwig joined the Bermanns in America in 1941, she also had a daughter, Monika, later Mr Shoffman’s mother, born out of wedlock.

According to Christophe Paul, a lawyer in Berlin specialising in inheritance cases, a handwritten will from 1933 proves that her parents wanted their estate to be divided equally between Brigitte and Hildegard. A letter written in 1946 indicates that Hedwig wanted Hildegard to inherit the Pissarro if it was ever found.

Mr Shoffman told The Times that Ms Bermann-Fischer knew the other half of her family well but had excluded them from all matters relating to the Pissarro. He said: “It feels like such a deceitful act. She’s taking away the last remaining legacy of the family and holding it for her own benefit.”

He hoped for a 50-50 split of the Pissarro but was offered only 20 per cent yesterday afternoon. “It made a mockery of the whole journey,” he said. “I’m disappointed but in God’s hands it will work out. It’s been a rocky road and there has been so much pain.”