'The Struggle for the Files: The Western Allies and the Return of German Archives after the Second World War'

The Struggle for the Files: The Western Allies and the Return of German Archives after the Second World War 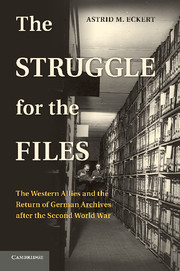 When American and British troops swept through the German Reich in the spring of 1945, they confiscated a broad range of government papers and archives. These records were subsequently used in war crimes trials and published under Allied auspices to document the German road to war. In 1949, the West Germans asked for their return, considering the request one of the benchmarks of their new state sovereignty. This book traces the tangled history of the captured German records and the extended negotiations for their return into German custody. Based on meticulous research in British, American and German archives, The Struggle for the Files highlights an overlooked aspect of early West German diplomacy and international relations. All participants were aware that the files constituted historical material essential to write German history and at stake was nothing less than the power to interpret the recent German past.

Astrid M. Eckert, Emory University, Atlanta
Astrid M. Eckert is Assistant Professor in the Department of History at Emory University. Eckert's dissertation on the history of the captured German records, which forms the basis of this book, won the Hedwig Hintze Prize from the German Historical Association and the Friedrich Meinecke Award from the History Department of Free University Berlin. Her work has been supported by grants from the Fulbright Foundation, the German National Academic Foundation, the Fox International Fellowships at Yale, and the American Academy Berlin. She has published articles in Central European History, Studies in Contemporary History and Vierteljahrshefte für Zeitgeschichte.

'Eckert's book does far more than trace the wartime and postwar fate of German archival records. It manages to incorporate a detailed and impeccably researched treatment of 'ownership' with a broader discussion of the international debate about the path of German history and the future of Germany. This issue interests a much wider audience within the field of German history and within the discipline of history as a whole. The other characteristic of this work that deserves emphasis is its transnational character. Eckert is so well versed in the history of Germany, Britain, and the United States that she can carry off a narrative of their interaction in the postwar period with success and with verve.' Richard Breitman, Distinguished Professor, American University

'The Struggle for the Files is an essential read for historians of Germany and the twentieth-century Atlantic world. Astrid Eckert provides a masterful, even riveting, account of the tangled odyssey of captured German archives after World War II - from the Allied confiscation and exploitation of Nazi-era records to the contentious return of the records to West Germany in the 1950s and after. At the same time she weaves her narrative within broader questions concerning the Allies' unprecedented archival guardianship. Partly these were immediate matters, ranging from the political and cultural sovereignty of a recent enemy-turned-ally to the use of wartime German records for Cold War intelligence. But they also concern the larger, more crucial, and most enduring postwar question of who would serve as the custodian and arbiter of Germany's catastrophic recent history.' Norman J. W. Goda, author of Tales from Spandau: Nazi Criminals and the Cold War

'Who knew you could write a thriller about archival transfer? This is a real page-turner, offering an exciting international tale of Cold War relations, Vergangenheitsbewältigung, and the writing of German history. Eckert's mastery of the archives - as well as the archival politics - of three nations is remarkable.' Mark Roseman, Professor of History and Pat M. Glazer Chair of Jewish Studies, Indiana University

'This is the book we have long needed. In no period of history has a study of the fate of the archives and public records of a nation defeated in war been more important than in the case of Nazi Germany. Astrid M. Eckert has created a splendid account of the postwar saga of the German records, and of their international importance through the long decades of the Cold War. Based on imaginative prodigious research and shrewd and judicious analyses, and written in a cogent and compelling narrative style, Professor Eckert's command of both the sources and the subject is complete. This is an important, and indeed essential, work of historical scholarship.' Charles W. Sydnor, Jr, Emory and Henry College, Virginia