Ghosts of the Past: Nazi-Looted Art and Its Legacies, Conference,Columbia University, New York, 19-21 February 2015 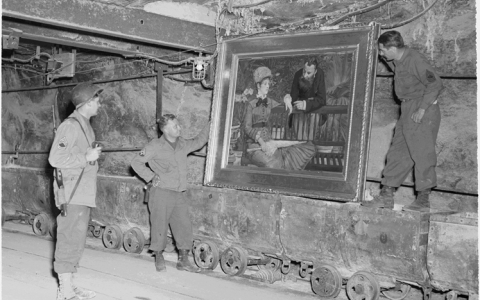 Organized by Columbia University’s Deutsches Haus and the Department of Art History and Archaeology, in collaboration with the Goethe-Institut New York and the Jewish Museum New York,  “Ghosts of the Past: Nazi-Looted Art and Its Legacies” convenes an international group of art historians, historians, curators, and scholars in provenance research and the history of German art dealership to explore an unexamined chapter of the legacies of the Third Reich.

This conference, to be held at Columbia on February 20 and 21, 2015, opens with a keynote lecture on Thursday 19 February at 6.30pm at the Jewish Museum by Olaf Peters, Professor, Martin-Luther Universität Halle-Wittenberg, and curator of the recent exhibition "Degenerate Art" at the Neue Galerie, New York.

Conference Registration required at link. Registration is full, but there is a waiting list on which to register.

The Jewish Museum and 501 Schermerhorn Hall at Columbia University

Olaf Peters is a Univeristy Professor at Martin-Luther-Universität Halle-Wittenberg, and a curator and art historian. He curated the blockbuster show "Degenerate Art: The Attack on Modern Art in Nazi Germany, 1937," at the Neue Galerie in the spring of 2014. His areas of study include modern art from 1800 to the present, art in Germany in the 20th century (Expressionism, New Objectivity, Art and National Socialism), and the history of art history and theory of art. He is the author of New Objectivity and National Socialism: Affirmation and criticism 1931-1947, Berlin 1998 (Zugl. Phil. Diss. Bochum Ruhr University, 1996); From the Black Acrobat: Max Beckmann between the Weimar Republic and exile, Berlin 2005 (Zugl. Habilitation thesis Rheinische Friedrich-Wilhelms-Universität Bonn); Otto Dix: The Intrepid Views: A Biography, Stuttgart-2013; and Max Beckmann: The Mythologized Modernity: A biography, Stuttgart 2015 (forthcoming).

Andreas Huyssen is the Villard Professor of German and Comparative Literature at Columbia University, where he served as founding director of the Center for Comparative Literature and Society (1998-2003). He chaired the Department of Germanic Languages from 1986-1992 and again from 2005-2008. He is one of the founding editors of New German Critique (1974-), and he serves on the editorial boards of October, Constellations, Germanic Review, Transit, Key Words (UK), Critical Space (Tokyo), Memory Studies (UK), Lumina (Brazil), Comunicação & Cultura (Portugal). In 2005, he won Columbia's coveted Mark van Doren teaching award. His research and teaching focus on 18th-20th-century German literature and culture, international modernism, Frankfurt School critical theory, postmodernism, cultural memory of historical trauma in transnational contexts, and, most recently, urban culture and globalization.

He currently continues work on two projects: a study of modernist miniatures, an experimental form of modernist writing, widespread in French and German modernism from Baudelaire to Rilke, Benn, Kafka, Kracauer, Jünger, Musil, Benjamin, and Adorno. And a consideration of the overlaps and tensions between the contemporary discourses of memory and human rights.

Holger A. Klein was educated in Art History, Early Christian Archaeology, and German Literature at the universities of Freiburg im Breisgau, Munich, London, and Bonn. His research focuses on Late Antique, Early Medieval, and Byzantine art and architecture, more specifically, on the cult of relics, reliquaries, and issues of cultural and artistic exchange.

From 2004–2007 he served as the Robert P. Bergman Curator of Medieval Art at the Cleveland Museum of Art and continued to oversee the reinstallation of the museum's renowned collection of Medieval and Byzantine art until 2010. His work as a curator includes various international loan exhibitions, among them Restoring Byzantium. The Kariye Camii in Istanbul and the Byzantine Institute Restoration (Wallach Art Gallery, 2004), Medieval Treasures from The Cleveland Museum of Art (Bayerisches Nationalmuseum/The J. Paul Getty Museum, 2007–08) and Treasures of Heaven. Saints, Relics and Devotion in Medieval Europe (Cleveland Museum of Art/Walters Art Museum/British Museum, 2010–11).

Professor Klein is the recipient of several awards and prizes, including the 50th annual Mark Van Doren Award for Teaching (2011), which honors a Columbia professor's commitment to undergraduate instruction as well as "humanity, devotion to truth, and inspiring leadership"; the Lenfest Distinguished Faculty Award (2012), which recognizes unusual merit as a teacher of undergraduate and graduate students as well as outstanding scholarship; and the Wm. Theodore de Bary Award for Distinguished Service to the Core Curriculum (2014)

Avinoam Shalem studied history of art at the universities of Tel Aviv, Munich (LMU) and Edinburgh where he earned his PhD degree in the field of Islamic art. Prior to his appointment as the Riggio Professor of the Arts of Islam at Columbia University, Shalem held the professorship of the history of Islamic art at the University of Munich and taught at the universities of Tel Aviv, Edinburgh, Heidelberg (Hochschule für jüdische Studien), Bamberg, Luzern and Jawaharlal Nehru University in New Delhi. He was Andrew Mellon Senior Fellow at the Metropolitan Museum of Art in New York in 2006 and Guest Scholar at the Getty Research Center in 2009. Since 2007, he is the Max-Planck Fellow at the Kunsthistorisches Institut in Florence.

Shalem’s main field of interest concerns artistic interactions in the Mediterranean basin, migration of objects, and medieval aesthetics. He has published extensively on medieval Islamic, as well as Jewish and Christian art. Professor Shalem is the author and editor of nine books, including Islam Christianized (Peter Lang, second ed. 1998); The Oliphant (Brill, 2004); Facing the Wall: The Palestinian-Israeli Barriers (Walter-König, 2011); Facts and Artefacts: Art in the Islamic World. Festschrift for Jens Kröger on his 65th Birthday (Brill, 2007); and After One Hundred Years: The 1910 Exhibition »Meisterwerke muhammedanischer Kunst« Reconsidered (Brill, 2010). He has recently edited the book Constructing the image of Muhammad in Europe (Walter de Gruyter, 2013), which introduces the readers to the complex history of the conceptualisation and pictorialization of the Prophet Muhammad in the West, from the early medieval times till the 19th century.

In addition, Professor Shalem has written more than one hundred articles on varied subjects including stylistic observations, document-based researches and cultural studies, historiographies and art criticism. He also researches and publishes on issues concerning Modernity in the Islamic world, especially in the Near East. He has recently acted as the initiator of the series of exhibitions Changing Views that were held in Munich in 2010/2011, and co-curated the exhibition The Future of Tradition: the Tradition of Future in Haus der Kunst in Munich. Shalem is currently directing three research projects at the Kunsthistorisches Institute in Florence: Crossing Boundaries, Creating Images: In Search of the Prophet Muhammad; Gazing Otherwise: Modalities of Seeing in the World of Islam; and The Chasuble of Thomas Becket in Fermo: A Biography. Professor Shalem is one of the directors of the international, Getty-supported project Art Space and Mobility in the Early Ages of Globalization: The Mediterranean, Central Asia and the Indian Subcontinent 400-1650.