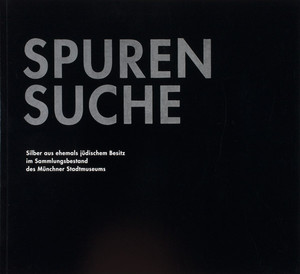 In 1939/40, the Historische Museum der Stadt München (since 1955 the Münchner Stadtmuseum) acquired a total of 205 silver objects from the municipal pawnbroker in Munich. Without exception, all objects had been handed in to the receiving office at the pawnbroker’s by Jewish families from Munich, forced to do so by the state after a new decree had been passed on 21 February, 1939 which applied to the whole Reich – the so-called ‘Dritte Anordnung des Vermögens von Juden’ (Third ordinance based on legislature governing the registration of Jewish Assets / Reichsgesetzblatt (Imperial Law Gazette) 1938 I. p. 282). There are still 148 of these items in the holdings of the Münchner Stadtmuseum. These were mostly made by silversmiths in Munich in the 18th – 20th centuries. It has only been possible to return 57 of these works to their former owners as a result of restitution applications submitted since 1945.

Under the terms of the ‘Common Declaration’ of 1999 passed by the Federal Government, the German Laender and the municipal head organisations, the silver objects still in the Münchner Stadtmuseum are cultural artefacts that were unlawfully taken from their former owners by the National Socialists and are, therefore, to be restituted to the owners or their heirs.

The Münchner Stadtmuseum is intent on fulfilling its moral obligation. Due to the fact that information from the municipal pawnbroker in Munich on the source of the objects is only fragmentary, it has however not been possible to trace previous owners to date. The aim behind the presentation of the silver objects in the exhibition ‘M.T. Wezlar, Silberschmiede in München, geründet 1875 – arisiert 1938’ (M.T. Wetzlar, Munich Silversmiths, founded in 1875 – Aryanised in 1938 , from February until July 2014, and this publication, is to gain further provenance-related information.

For further information on the book and the Münchner Stadtmuseum, click here.