'Alice’s Book: How the Nazis Stole My Grandmother’s Cookbook'

Alice’s Book: How the Nazis Stole My Grandmother’s Cookbook

Alice Urbach had her own cooking school in Vienna, but in 1938 she was forced to flee to England, like so many others. Her younger son was imprisoned in Dachau, and her older son, having emigrated to the United States, became an intelligence officer in the struggle against the Nazis.

Returning to the ruins of Vienna in the late 1940s, she discovers that her bestselling cookbook has been published under someone else’s name. Now, eighty years later, the historian Karina Urbach – Alice’s granddaughter – sets out to uncover the truth behind the stolen cookbook, and tells the story of a family torn apart by the Nazi regime, of a woman who, with her unwavering passion for cooking, survived the horror and losses of the Holocaust to begin a new life in America.

Karina Urbach is currently researching at the Institute for Advanced Study in Princeton, New Jersey. She received her doctorate from the University of Cambridge and has taken part in several BBC and PBS documentaries on the Victorian Age. In 2015 her book Go-Betweens for Hitler (OUP) triggered a debate in the UK about the Royal family’s links to Nazi Germany. Her biography of Queen Victoria was published with great acclaim in Germany. For her historical novel Cambridge 5 (written under the pseudonym Hannah Coler) she was shortlisted for three literary prizes and won the Crime Cologne Award in 2018. 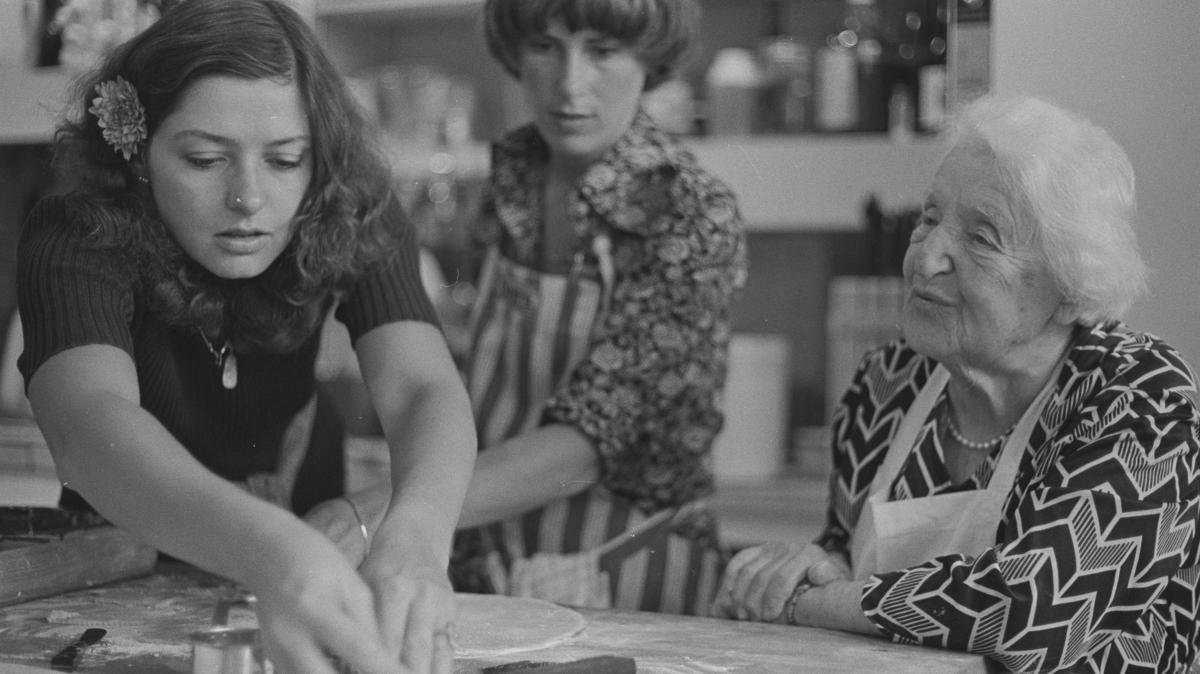 Alice Urbach at 92 with her pupils

The Nazi theft of Jewish paintings and property is well-known. But this story about Alice Urbach’s stolen cookbook is just as fascinating, says Ysenda Maxtone Graham

Alice Urbach’s bestselling cookbook of 1935 had a delightfully idiomatic Viennese title ending with an exclamation mark: So kocht man in Wien! (“So cooks one in Vienna!”). It captured the jocund spirit of its author, an accomplished cook who was always smiling, rolling pastry and using exclamation marks, and of her beloved city, a centre of culinary excellence that (she thought) welcomed assimilated Jews like herself.

In September 1938, after the Nazi Anschluss, Alice’s name was removed from her book. She was summoned to her publisher, Ernst Reinhardt Verlag, and told by her editor, Hermann Jungck, to hand over all her copyright and publishing rights. Quaking and powerless in the new overtly antisemitic regime, she signed. Her book was “Aryanised”, given a new “author” by the name of Rudolf Rösch. There’s no trace of a real Rudolf Rösch in the publisher’s archives, but there happened to be a man of that name in Munich who had spoken on the radio about plum dumpling recipes. Perhaps Jungck decided to make this man the book’s “author”. Without penning a single word, “Rudolf Rösch” became a bestselling writer overnight.

Alice’s preface to her cookbook, in which she had celebrated “the colourful mix of peoples that made up the former Austro-Hungarian monarchy”, was deleted, as were her recipes for Rothschild sponge and Rothschild omelette, plus any clues that the book was written by a woman. All that remained of Alice were close-up illustrations of plump fingers (hers) demonstrating how to plait dough and wield a pastry cutter. Apart from that, she was gone. 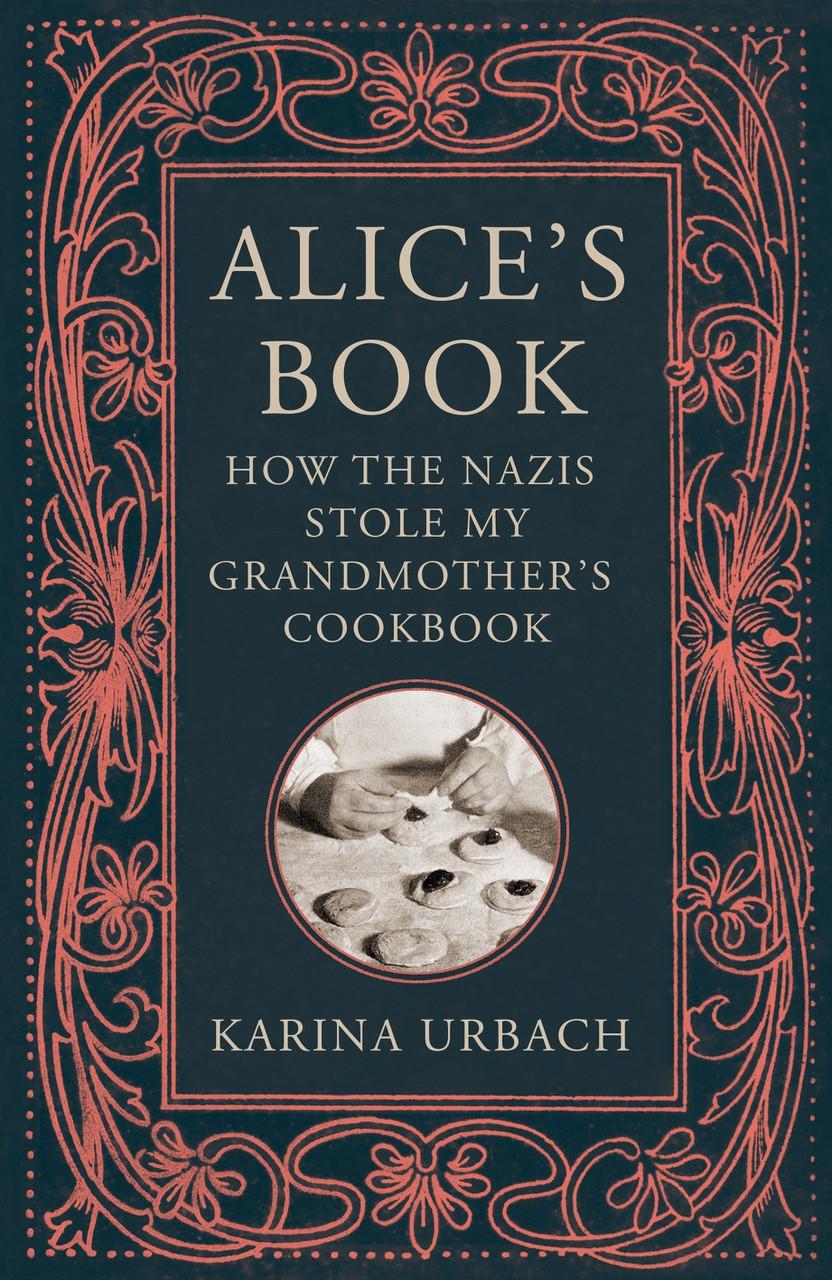 I knew about the theft of Jews’ material assets by the Nazis: the pictures, the furniture, the houses. I did not know about their brazen theft of intellectual property. This fascinating book, by Alice’s granddaughter Karina Urbach, shines a spotlight on this lesser-known aspect of Nazi looting. The same happened to other Jewish writers in Vienna, she tells us, such as the physics writer Paul Wessel and the authors of a standard medical work Josef Löbel and Walter Guttmann, all of whom had their life’s work stolen from them.

Alice’s editor Jungck comes across as a ghastly, self-justifying villain. Karina argues that in 1938 he could have claimed to have had no choice. The Nazis stipulated that no Jewish authors could be published, so Alice’s book would have needed either to be Aryanised or removed from his list. His real personal culpability, Karina believes, started after the war. She calls his behaviour “a classic example of the ‘second guilt’ of the postwar years”.

He probably hoped that Alice was conveniently dead, but she wasn’t. She had emigrated first to Britain, then to the US, and in 1948 wrote to him from her apartment in Manhattan, asking to have her rights back. “Can’t you do anything to restore my name? After all, it is my work!” That exclamation mark again. And later, even more pitifully, “How I’d love to see my name mentioned as the author!!” and “Do you still have one or two original copies of the book? I would happily pay for them!” 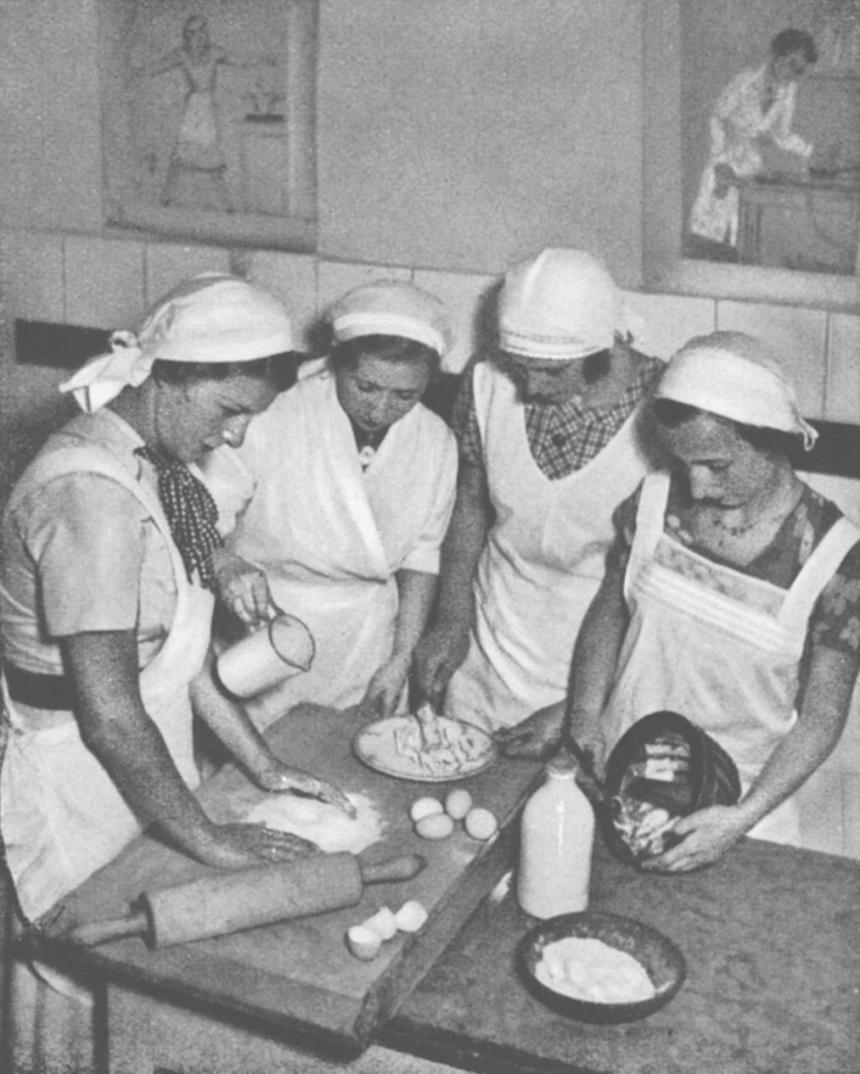 From Alice Urbach’s original cookbook, a photograph taken at her cookery school

Jungck strung her along, reminding her that she had signed away her rights, but reassuring her that he would republish the book under both names, hers and Rösch’s. He had no intention of doing so. In 1966 he granted another licence to publish the book, still under the name Rudolf Rösch and this time with a blurb punning on the surname, which means crisp: “As every good housewife knows, Wiener Schnitzel has to be crisp [rösch] and golden brown.” In 1974 Jungck covered his tracks, claiming in a book that Alice had borrowed recipes from other books and that hers had badly needed modernising.

I could go on and on about the cookbook, but Karina doesn’t. Her book doubles as a full memoir of her grandmother, deviating from the central cookbook-stealing act of the title rather in the way that Judith Kerr’s When Hitler Stole Pink Rabbit deviates from the rabbit-stealing and puts the theft in context. Partly, but by no means only, because I too happen to be the daughter and granddaughter of assimilated Jews who had to flee from Nazi Austria in 1938, I was gripped by Alice’s life story.

Growing up in grandeur as the daughter of a wealthy textile magnate, Alice married an eligible bachelor called Max Urbach who turned out to be a gambling addict. She was forced to sell her diamond bracelet to pay off his debts. He died in 1920, leaving her as a 34-year-old widow and mother of two sons, Otto and Karl. She desperately needed to earn money, so she started a small cookery school — mostly for well-heeled women, but with (in her own ever-merry words) “a few men sprinkled in for company!” Her cookbook was the result of her growing reputation as a cookery teacher. 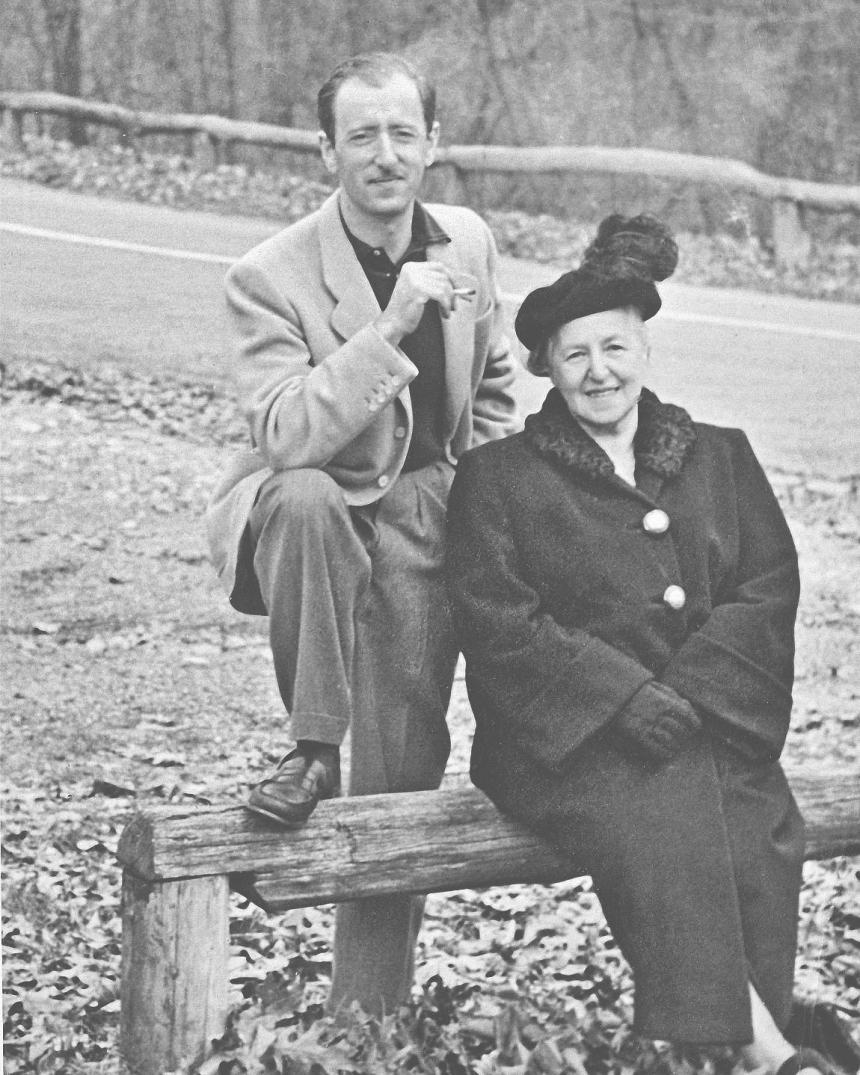 Alice Urbach with her son Otto

Suddenly, in March 1938, the city that had loved her hated her. Karina, who is Otto’s daughter, captures the nightmarish months after the Anschluss, when anyone of Jewish extraction lost their livelihood and the word on all their lips was “affidavit”, the legal document they needed to emigrate to America. Otto had moved there before the war and made friends with a lovely wealthy family called the Dodsons, so there was hope.

Alice’s natural cheerfulness made it impossible for her to absorb or even talk about what happened in those first six months of Nazi thuggery on her beloved streets. “Brain fog,” she called it. She lost her right to work and lodged with a divorced, semi-destitute friend. There were more pressing things to worry about than the name on the jacket of her cookbook.

She escaped to England, but was permitted to remain only while she could prove she had work in domestic service. So off she went to Harlaxton Manor near Grantham to work as a cook for a nouveau-riche widow called Violet van der Elst, a comic side character in this story, detested by her servants because she woke them at 3am to change her bedclothes, hurled objects at them and accused them of stealing. “I hope she’s broken her neck,” muttered the butler when their employer fell down the stairs one evening. Van der Elst had worked her way up from servant to millionaire; Alice had done the opposite. However, Van der Elst was very fat and had to sack Alice to avoid the temptation of guzzling her pastries. Alice and her fellow refugee Paula Sieber were then sent up to Tynemouth to run a home for Kindertransport children, which was later evacuated to Windermere.

Meanwhile, her son Karl happened to have an appointment at the Central Office for Jewish Emigration in Vienna on November 10, 1938, to pick up the one final document he needed for emigration. It was the morning after Kristallnacht. He was beaten up on arrival and loaded on to a truck in what would become known as the “November Pogrom”. The next thing he knew, he was given a “D” for “Dachau” on his papers and sent to that hellhole. By a miracle (and he never found out quite how it happened, but perhaps it was through a bribe by one of his cousins to a guard), he was released in January 1939. On arrival in America, he gave an interview to a newspaper, The Oregonian, about the horrific conditions in Dachau, but isolationist America wasn’t interested.

Alice joined her sons in the US after the war. Her apartment block at 790 Riverside Drive was full of Austrian emigrants like her, and she was a minor celebrity because many of them had brought with them her original 1935 cookbook to keep alive the recipes from the old country. On her birthday each year Alice transformed her sitting room into a replica of Demel’s coffee house.

She died in 1983, aged 97. After the German publication of Karina’s book in 2020, Ernst Reinhardt Verlag reprinted the original 1935 edition of Alice’s cookbook, with her name on the jacket. Every German and Austrian library has been sent a copy.