With an estimated half a million works of art destroyed or stolen from Poland during World War Two by Germany and the Soviets, the ministry of culture is doubling up on its efforts to regain some of Poland’s lost heritage. 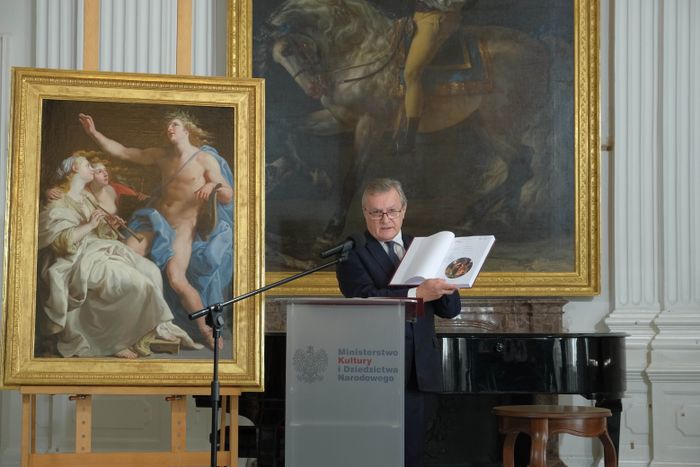 Empty Frames, a campaign that aims to remind people about Polish works of art and culture stolen during World War II by both the German and Soviet occupiers, was launched today by culture minister Piotr Gliński.

As part of the campaign, special plaques providing information about Polish war losses in culture will be placed in 12 cities across Poland.

Speaking in Warsaw’s Wilanów Palace, Gliński said: "Of all the countries that were occupied or fought in World War II, it was Poland that suffered the greatest losses, including in the field of culture and art,” said Gliński.

"To this day, many Polish museums have empty frames - a symbol of Polish wartime losses," he added.

He added that though from the very beginning of the war the Germans carried out a planned and systematic robbery of public, private and church collections, they were not alone in the wholesale looting of Poland.

He said: “On September 17, 1939, the Red Army entered Polish territory, and later, with the moving eastern front, the so-called Trophy Brigades, units composed of specialists in various fields of culture, entered Poland. To be precise, of thieves who were involved in robbing works of art."

Their task, he continued, was to locate and seize all valuable objects of material heritage, works of art, collections, museum artefacts and archives. These actions quickly turned into general looting and devastation.

“We are not able to assess precisely the scale of the plunder done by the Soviets. In the case of hundreds of thousands of objects lost by Poland, the trail leads precisely to the Russian Federation or the former Soviet republics,” Gliński said, pointing out that the lack of access to Russian museum resources and archival sources makes it difficult to determine how many works of art are still on Russian territory.

Diplomatic efforts are underway to regain some of these artefacts.

Two days ago, a diplomatic note was handed to the embassy of the Russian Federation with documentation detailing some of the plunder that Poland wants back.

Earlier, Gliński said that Poland would submit seven more restitution requests to Russia regarding works of art exported to the USSR during World War II.

Some of the artworks in question have been identified in the collection of the A. Pushkin Museum of Fine Arts in Moscow.

Two weeks ago, in Warsaw’s Royal Castle, a report on the losses suffered by Poland as a result of German aggression and occupation during World War II was presented.

The Ministry of Culture and National Heritage informed at the time that the losses in culture and art presented in chapter 5 of the report were valued at 19 billion 313 million zlotys.

If the destruction of historic and sacred buildings is added, the total Polish cultural losses caused by Germany alone during the Second World War amount to “at least 51 billion 878 million zlotys,” the ministry said.

Despite the passage of 75 years since the end of the Second World War, the Ministry of Culture and National Heritage has not ceased in its efforts to document, search for and recover lost works of art.

Since the 1990s, registers of lost works have been kept and efforts have been made to recover them.

So far, it has been possible to recover, among others, chests with paintings by Matejko, a chalice of Casimir the Great from 1351 as well as Leon Wyczółkowski’s painting ‘Young woman in mourning in a painter's studio’, Aleksander Gierymski ‘Boy carrying a sheaf’ Anna Bilińska’s A Negress and Aleksander Gierymski’s famous ‘Jewess with oranges’.

The most valuable painting from Polish collections that remains missing is Raphael Santi’s Portrait of Young Man. Some historians believe that it is the most important painting to have gone missing during the war.

The painting was taken from the Czartoryski Museum in Kraków at the start of the war and hidden in the family’s residence in Sieniawa.

Discovered by the Gestapo, it hung on the wall of Nazi governor Hans Frank’s office in Wawel Castle, where it was last seen.

It is believed that Frank took the painting with him when he fled Kraków. However, when Frank was arrested at his home in Bavaria, the painting was not discovered.