The gilded silver trophy, awarded to the winner of an archery contest in 1618, went missing after the 1945 Dresden bombing 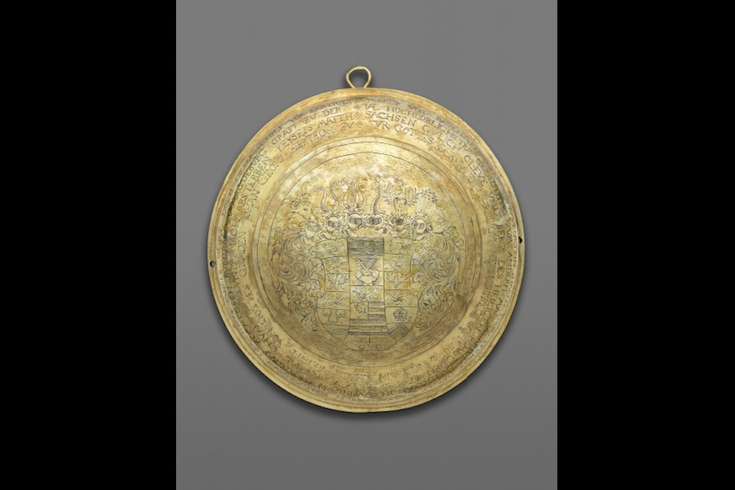 The Philadelphia Museum of Art has returned a 17th century gilded silver shield to the Dresden City Museum. The piece, a trophy from an archery contest, was lost in the destruction of Dresden near the end of World War II.

A gilded silver shield from a 17th century bird shooting contest in Germany has been returned to the Dresden City Museum by the Philadelphia Museum of Art, ending a decades-long effort to bring the treasure back to Europe. The piece had been missing since the end of World War II.

The shield was a trophy awarded to the winner of an archery competition in 1618 at an annual festival organized by Dresden's city council, which maintains a collection of silver treasure. The Whitsun shooting match, which dates back as early as the 1440s, was traditionally held at a bird meadow as part of an army show in which Dresden residents' military abilities were evaluated. It later evolved into a multifaceted folk festival, the Dresden Vogelwiese.

The meadow and much of the archery equipment at the festival ground were heavily damaged in the final months of European combat in World War II, during the joint British-American air raids of Dresden in mid-February of 1945. More than 3,900 tons of bombs and incendiary devices were dropped on the city, killing an estimated 25,000 people. The mission's brutality has a disquieting legacy, but was justified by the Allies as a means of cutting off Dresden's rail transport and communications infrastructure to break the will of Nazi Germany's resistance.

The marksman's shield was among many treasures and works of art that were stolen from the ruins of Dresden and other German cities in the years immediately after World War II. It had once been part of a permanent exhibition at the Dresden City Museum, which opened in the late 19th century, but was stored in the city hall basement during the war.

Originally, the shield (Schützenschild) was awarded to Elector Johann Georg I of Saxony, the winner of the crossbow competition, who donated the engraved trophy in 1619. The inscription read:

For God's honor and Christian hearth I battle as long as my life lasts. By God's grace Johann Georg, Duke of Saxony, Jülich, Cleve, and Berg, Arch Marshall of the Holy Roman Empire, and after the death of Emperor Matthias, in his most laudable memory, Imperial Vicarius for the second time; Landgrave in Thuringia, Mark-grave of Meissen, Burggrave of Magdeburg, Count of the Mark and Ravensberg, Lord of Ravenstein, has shot down the Pentecost bird this 27th of May in the 1618th year; yet this shield was made in the 1619th year.

After World War II, the shield remained missing for just over a decade before it turned up in the Swiss art trade, where it was auctioned in Basel to a private owner from New York in 1956. The owner bequeathed the shield to the Philadelphia Museum of Art in 1977.

Collections researchers in Philadelphia became aware in 2016 of a search notice for the shield posted in an online registry of missing cultural objects. The German Lost Art Database had published the request to locate and return the piece four years earlier.

The Philadelphia Museum of Art contacted the Dresden City Museum (Stadtmuseum Dresden) and arranged a restitution of the shield in 2020. The date was delayed by the COVID-19 pandemic, but the shield has now been returned and will be on display in Dresden beginning Saturday, July 2.

“It is deeply satisfying to know that our thoughtful scholarship led us to this important moment when this work is returning home. Although it had been purchased in the 1950s in good faith and later donated to the museum, this object rightfully belongs to Dresden, as it has become compellingly clear that it had been part of the city‘s silver treasure and went missing in 1945," said Timothy Rub, director emeritus of the Philadelphia Museum of Art.

In the last five years, the Dresden City Museum has recovered two other silver treasures lost during the war.

"For the third time in my term of office, I can be present when a part of the council treasure returns to our city. A very special privilege. I would like to thank all those involved for their extraordinary commitment," said Dresden Mayor Dirk Hilbert.