MFAH may keep painting once owned by Hitler’s art dealer, as judge rules against Jewish heirs 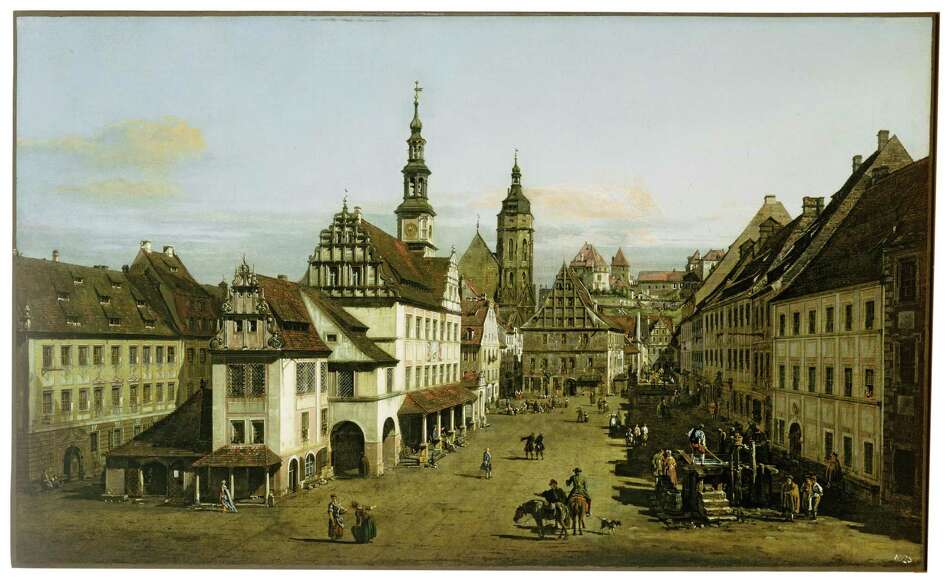 The urban landscape painting, “The Marketplace at Pirna,” circa 1764, was given as a gift to the Museum Fine Arts, Houston in 1961. Three family members in Chile say the Nazis obtained the painting under duress from their Jewish grandfather and it should be their property. A federal judge in Houston will weigh in soon. Bernardo Bellotto, The Marketplace at Pirna (c. 1764), source www.mfah.org


A federal judge ruled this week that the Museum of Fine Arts Houston can keep an 18th-century painting once owned by Nazis, despite pleas from relatives who said their Jewish grandfather sold it under duress to Adolf Hitler’s art dealer.

Three grandchildren of Max James Emden sued in federal court last year saying they are the rightful owners of "The Marketplace at Pirna” by Bernardo Bellotto, which has been in the museum's custody for more than 60 years. The grandchildren say Emden, a department store magnate and art collector, owned the painting in the 1930s, but was forced to sell it to Nazi art dealer Karl Haberstock due to the extreme economic hardship the Third Reich inflicted on Jewish businesses like his.

U.S. District Judge Keith P. Ellison dismissed the grandchildren's complaint without prejudice, based on the doctrine that the U.S. government may not interfere with the acts of other sovereign governments. The family members are not barred from suing again using a different approach or they could appeal the ruling.

They could also seek help from the U.S. Attorney, who could bring a civil forfeiture action, according to Derek Fincham, a professor who teaches art law at the South Texas College of Law Houston.

The Emden grandchildren argued that the Dutch government erred in delivering the artwork to the wrong person. Two other Bellotto paintings were deemed property of Jewish heirs.

On that argument, Ellison determined, "The U.S. government is not a party to the present matter, and certainly has not indicated that application of the Act of State doctrine would not embarrass or hinder it in its conduct of foreign relations with the Netherlands."

The judge also found the Emden heirs’ dispute over who owned the painting hinged on whether they — not the Museum of Fine Arts — held "good title" to the paintings. MFAH argued that it received good title from the dealer who bought it from the dealer who accidentally received it as restitution from the Netherlands in 1948.  He said the heirs could not prevail because, "Reaching into the Dutch government’s post-war restitution system would require sensitive political judgments that would undermine international comity."

The grandchildren also said the painting was obtained from Emden as his business fell apart due to laws imposed with the aim of cutting off Jews from the German economy and stripping them of their assets. In addition to sending them to concentration camps and exterminating them, Nazis deprived Jews of their citizenship and forced them to surrender their businesses and enterprises, the suit says, and Emden’s textile trading company was liquidated and he could no longer access any of his earnings from his home in Switzerland.

"Those sales should be thought of more as a forced sale, where the Nazis in essence were very clever in how they did things," Fincham, the law professor, said. "They made it look like a sale and would give you a receipt — but if you are forced to make the sale very quickly or for 1 percent of what the painting is worth, that's not really an even bargain."

He compared the family's situation to what many are experiencing with the ongoing war in Ukraine. Hundreds of thousands of people have fled the war-torn country, with many leaving behind or selling precious items and art.

"Works of art are being looted from Ukraine right now," Fincham said.

With the Bellotto, the museum’s lawyers argued the sale to the art dealer was voluntary and met the owner’s asking price. The museum noted in a statement, “When we thoroughly researched and reviewed the claim, we found no evidence that suggests that the Bellotto had been stolen, seized, or confiscated, and we have extensive documentation that in 1938 Dr. Max Emden, a Swiss citizen and resident, initiated the voluntary sale of our painting.”

The painting was recovered by a group of European and American curators, historians and librarians who came to be known as the Monuments Men, who found art Nazis had stashed in 1,500 locations, including caves, castles and monasteries. They found the Bellotto among other works stored in an Austrian salt mine.

The Monuments Men Foundation for the Preservation of Art became involved in investigating the painting's provenance for the Emdens. In a statement to the Houston Chronicle, the organization said the museum's director in 2021 falsely denied the Bellotto in the collection as a the one the Emdens are seeking but said at that same time "the (museum’s) own website listed both Max Emden, and Karl Haberstock, Hitler’s main art buyer, in the chain of title." The foundation statement called the ruling disappointing, and said the MFAH's refusal to return the painting to its alleged owners is an "example of greed" being prioritized over "grace" by officials at the museum.

"Regardless of any court ruling, a painting once owned by a German Jew, stripped of his assets by the Nazis, now hangs in one of our nation’s wealthiest museums because of a 1946 clerical error and a 1951 fraud," the foundation said.