The Film the Nazis Tried to Destroy

'Europa', a 1931 film by Polish radicals Franciszka and Stefan Themerson, was long believed destroyed by the Nazis – but its rediscovery offers an eerie glimpse into a world spinning towards war and destruction. 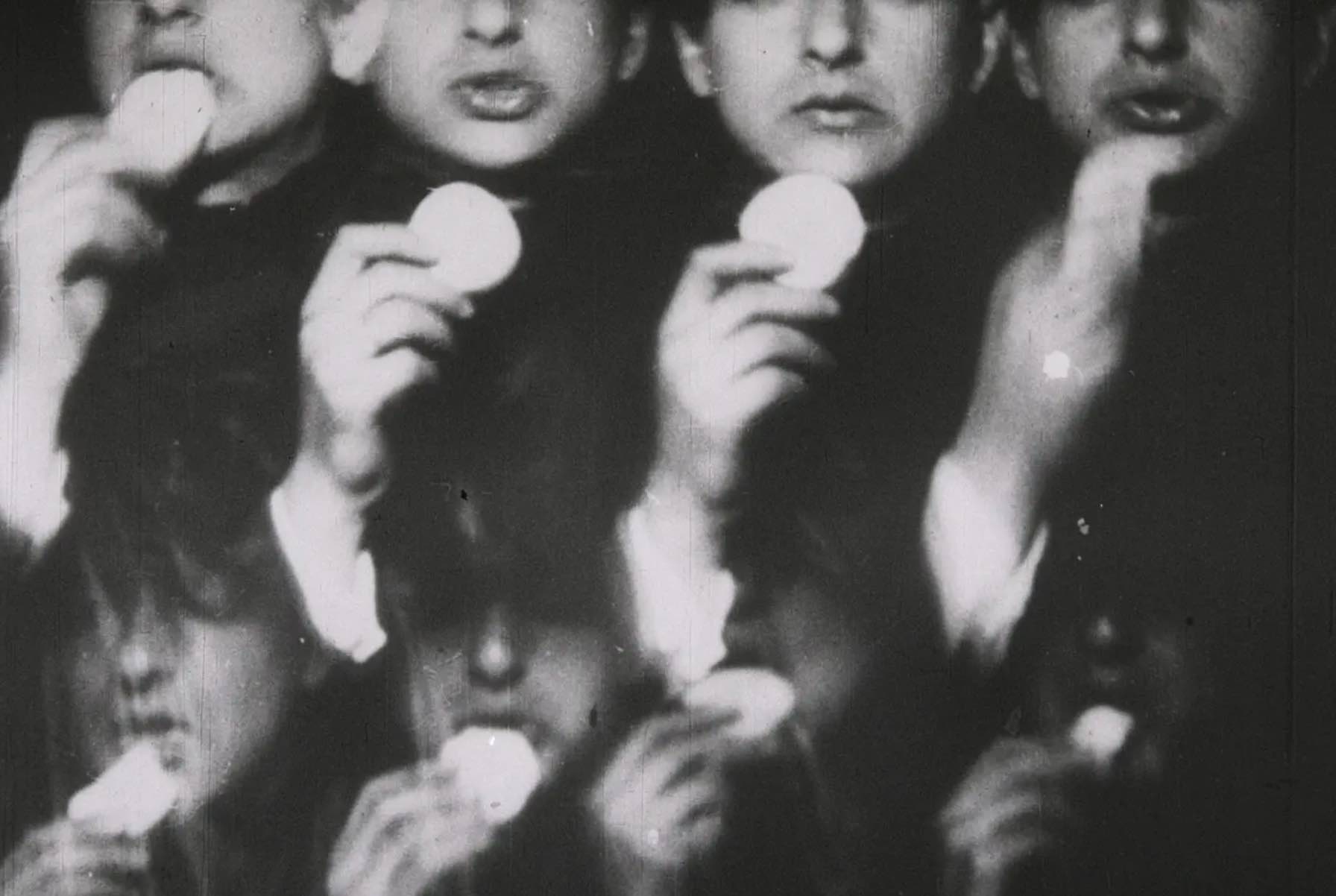 'Europa' by the Themersons was shown for the first time at this month's London Film Festival.

In many ways, loss and rediscovery condition the idea of the avant-garde, whose present stakes are trapped in a cycle of endless reassessment. The narrative of return also animates much of the avant-garde’s history; the mythic lost ‘original’, such as Marcel Duchamp’s famous Fountain, emerges as a reproduction some years later. When artworks resurface, the past punctures the present in a confrontation that is both threatening and marked by a desire for redemption.

Europa, a short film made by the Polish artists Franciszka and Stefan Themerson in 1931, was confiscated by the Nazis in 1940 and presumed lost until its unearthing in 2019 at the Berlin Bundesarchiv and finally screened this month. Despite this gap in its history, during the intervening years the artwork attracted sustained attention, garnered not only from the surviving stills and reconstruction attempts, but the all-important fact that Europa is, at its core, a multimedia project.

Based on a poem of the same title written by the Futurist poet Anatol Stern and first published in 1925, it gained wider notice in the form of a booklet designed by the Constructivist Mieczysław Szczuka, with a cover by Teresa Żarnower. Szczuka died in a mountaineering accident two years before the brochure’s publication. Though just twenty-eight-years-old, at the time he was already an accomplished artist, known for his commitment to utilitarianism and interest in techniques such as photomontage.

The booklet provides a storyboard for Stern’s script, mixing the geometry of early Constructivist design with collaged illustration: on one of its pages, a long red stripe ceases to be a simple graphic device and turns into a perforated strip of analogue film. The Themersons, in turn, animate abstract shapes, blending them with snippets of footage.

Complementing the disjointed text, the visual strata of the poem conjure up a world in crisis, threatened by (more) war and (more) devastation, descending into a state of constant catastrophe. In this regard, Europa is as much of its time—the letters ‘XX’, standing for the twentieth century, repeatedly materialise on the screen—as transhistorical. ‘This storm,’ as Walter Benjamin proclaimed in his Theses on the Philosophy of History, ‘is what we call progress.’

If there is one question fundamental to Europa, it is certainly that of progress. The film deploys an array of modern photographic techniques and references. Hands appear as photograms of the kind we associate with Lucia Moholy and László Moholy-Nagy. A compass guided by a single hand reminds us of El Lissitzky and Jan Tschichold’s cover for the magazine Foto-Auge. There is a man punching an imaginary opponent, one of Eadweard Muybridge’s boxers stripped of his sparring partner.

The broader context that this imagery appears in, however, is neither celebratory nor affirmative. Herein lies the project’s key achievement: it is less a ‘total work of art’ than a self-aware one. The Themersons acknowledge that Stern’s poem is as much about the avant-garde itself as the world it wanted to merge with.

Measurements, diagrams and calculations litter the screen but make little sense. As the camera pans out, what at close range looked like a menacing piece of machinery turns out to be a typewriter. Technology and its relation to the body was, of course, at the forefront of the avant-garde project. In 1924, reflecting on his poetic milieu, Stern wrote: ‘Today, one is no longer only a human. I’m also a telephone, cinema, telescope, rotary printing press, poster, radiotelegraph.’

By 1931, the implications of this recognition were marked by pervasive pessimism. The Themersons show the natural world violently paved over by the urban landscape. Beneath the pavement, the seed—but it is sprouting American skyscrapers, like those in Kazimierz Podsadecki’s photomontage Miasto – młyn życia (City – The Mill of Life). ‘S.O.S’, the film exclaims, likely in an allusion to Jalu Kurek’s 1927 novel of the same title, published by the avant-garde imprint Zwrotnica (Railroad Switch). Save Our Souls!

Threaded through this kaleidoscope of pictures are two recurring motifs: the printed word and the act of eating. The film begins inside the restaurant of the famous European Hotel in Warsaw but quickly shifts to Europe as a media construct. The consumption of food seamlessly turns into the consumption of newspapers, menacing headlines literally shoved into one’s greedy, thoughtless mouth.

The imagery is Bataillean: the mouth, on the one hand the consecrated source of language, on the other, a base orifice—a body part not so dissimilar from the big toe (the Surrealist photographer Jacques-André Boiffard’s photographs for Bataille’s Documents attest to this). As the film’s pace increases, mouths start screaming in exaggerated, grotesque horror. A close-up of raised hair growing out of bumpy skin conveys a sense of emergency—not only as a metonym for fear, but due to the scene’s abject, repulsive materiality.

Europa never lets the audience forget that it, too, exists to be devoured—but it will not make itself easy to digest. Demonstrating acute awareness of the paradox at its own heart (animations of a heartbeat rupture the footage at brief intervals), transposition becomes the film’s method. ‘Dymanite’, the screen proclaims at one point, a familiar word made unfamiliar.

In a moment of excess self-reflexivity, the Themersons include a recording of the very material we are watching: analogue film itself, moving steadily through the projector’s entrails. An apple sliced into pieces thin like the Holy Communion suddenly finds itself on a conveyor belt of apple slices, rolling on and on, until it becomes mechanical reproduction itself.

As the world disintegrates, so does the avant-garde idea. Geometrical shapes fall from the sky, followed by nuts, bolts and other machine parts. On a diagram of the human digestive system, we see matter travel down the oesophagus. The words earlier devoured make their way to the stomach; perhaps the same one that features in the 1921 manifesto of the Polish Futurists Nuż w bżuhu (Nife in the Stomak), to which Stern himself contributed a poem.

It too referenced the continent: ‘and in a black open casket / lay / EUROPA / (…) long liv the ded for the alife!’. In an instant all becomes clear: no redemption will accompany the resurrection. As Europa returns to us today, what it brings with itself is reflux.

Marta Zboralska is finishing her PhD in the Department of History of Art, University College London, where she specialises in twentieth-century Polish art.