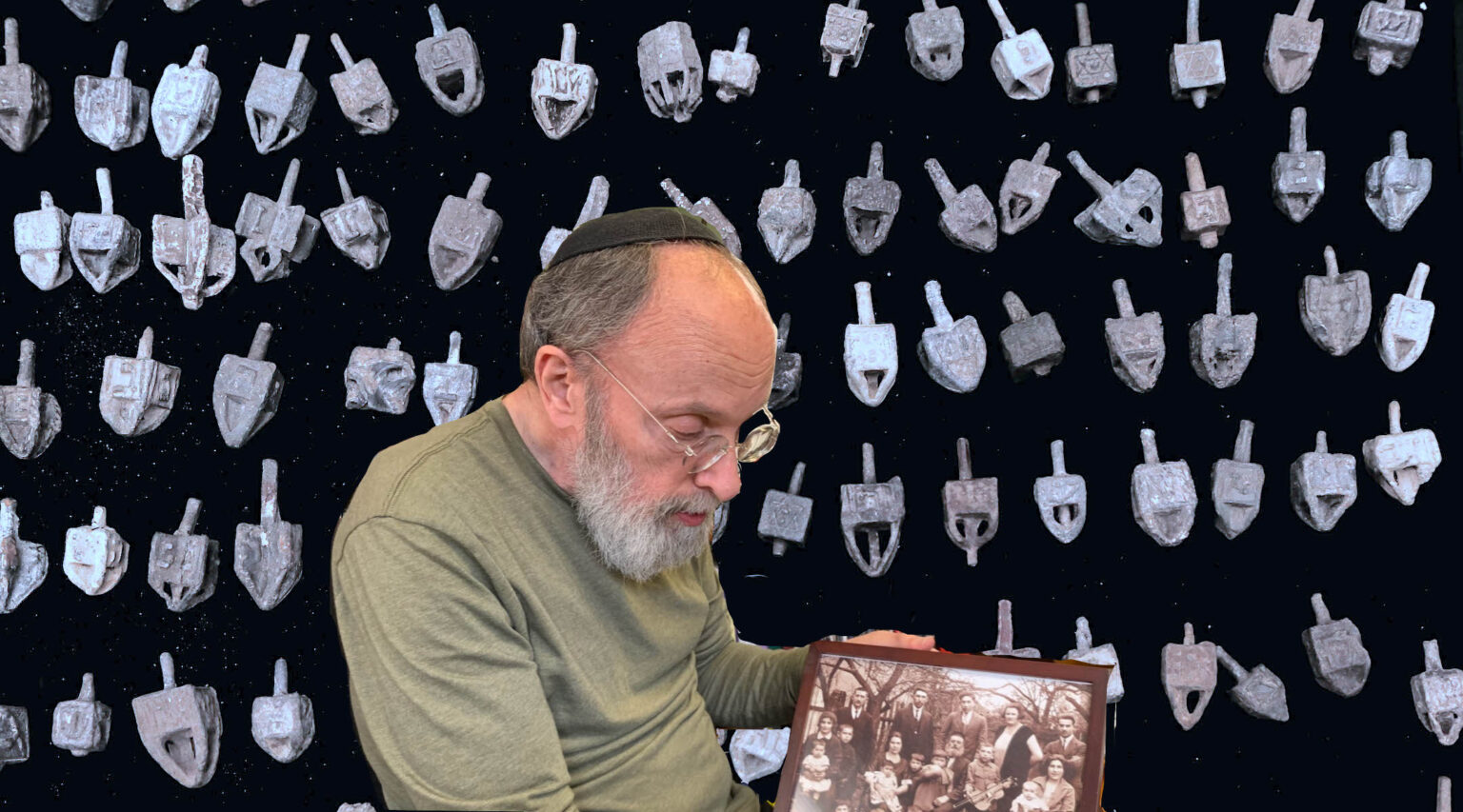 Arthur Kurzweil first encountered amulets and dreidels excavated by treasure hunters during a trip to his father's hometown in Poland. Now he has collected thousands of them

Even when Arthur Kurzweil sits by himself in his study, he doesn’t feel that he’s alone. After all, he has the dreidels — all 4,000 of them.

Kurzweil, 70, is a prolific author and editor who has written books about Judaism and magic and his car rides with Talmud scholar Adin Steinsaltz, as well as the Kabbalah and Torah installments in the “… for Dummies” series.

His most significant contribution to Jewish publishing, however, may be his books and teaching about Jewish genealogy: He has exhaustively chronicled his efforts to trace his own family’s lineage, including along the many branches that were broken when family members were murdered in the Holocaust.

The dreidels, pulled from the earth across Eastern Europe, represent an extension of that work, Kurzweil told the Jewish Telegraphic Agency from amid the collection in his Long Island home.

“I look at them … and I think, what’s the history of this? And when’s the last time somebody played that game?” he said, adding, “I wonder what this person’s fate ultimately was.”

It’s not just dreidels that surround Kurzweil. Quietly and in collaboration with Eastern Europe’s sizable community of treasure hunters, he has amassed a sweeping collection of Jewish objects unearthed from throughout Eastern Europe. While Holocaust museums and concentration camps bring visitors face to face with the piles of shoes and eyeglasses worn by Jews who were about to be killed, Kurzweil lives with reminders of the lives they lived.

In addition to the tiny dreidels, made of pewter and lead and clearly intended for children, Kurzweil has also collected boxes of metal kosher seals, which would have been affixed to packages of food to attest to their kosher status; dozens of pins that would have been worn by members of Jewish youth and Zionist organizations; and coin-sized metal disks that synagogues would have handed out to people being called to the Torah. 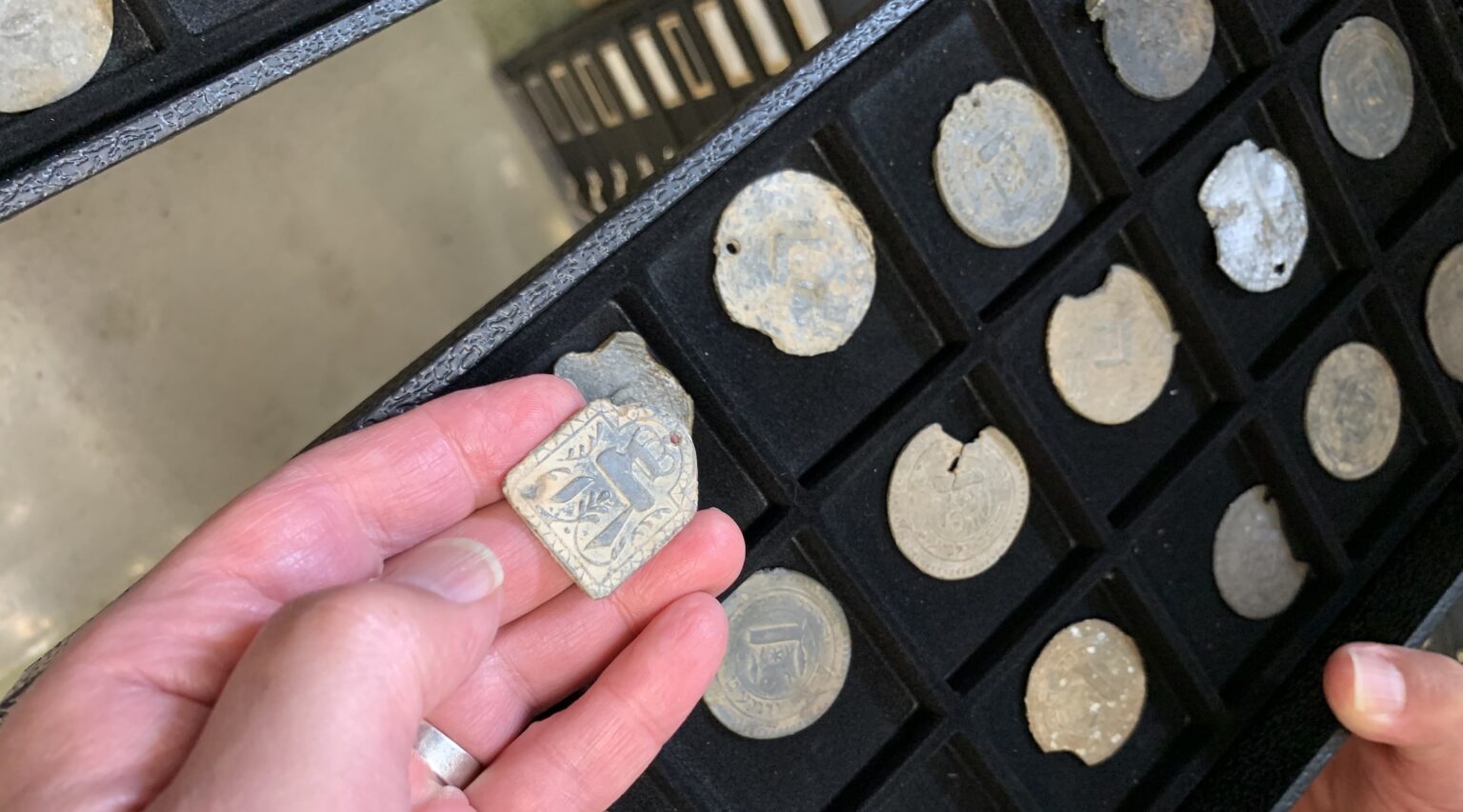 The size and breadth of Kurzweil’s collections paint a unique portrait of everyday Eastern European Jewish life during the late 19th and early 20th century, until the beginning of the Holocaust. That makes them unique in the context of Jewish history and art collections, which more typically focus on ritual objects, such as Hanukkah menorahs, Shabbat candlesticks or intricately decorated spice boxes used in the Havdalah ritual to end Shabbat.

“It shows everyday shtetl life at its most basic and ordinary and, if you will, when things were going relatively well,” said Beth Weingast, an art and Judaica appraiser who examined the collection for Kurzweil several years ago.

William L. Gross, a collector of Judaica and Jewish art in Tel Aviv for nearly half a century, owns a large collection of amulets himself. He said he had never heard of a collection of workaday items as large as Kurzweil’s, noted that objects such as the ones Kurzweil collected that speak to the daily lives of Jews in pre-war Eastern Europe remain woefully understudied.

“It’s fabulous material because it’s objects of the normal, regular Jew, not the aristocracy, not the merchant class but the people. And that is of extreme importance,” Gross said.

John Ward, who heads the silver department at Sotheby’s, likewise said Kurzweil’s collection of Judaica made from inexpensive metals such as pewter and lead is significant. “To have this focus on the folk art and the utilitarian side, that would be the only one I’ve heard of,” he said.

While Ward spends most of his time working with objects made of expensive materials, he noted that a collection like Kurzweil’s would tell an important story about Jewish communities that were destroyed during the Holocaust. 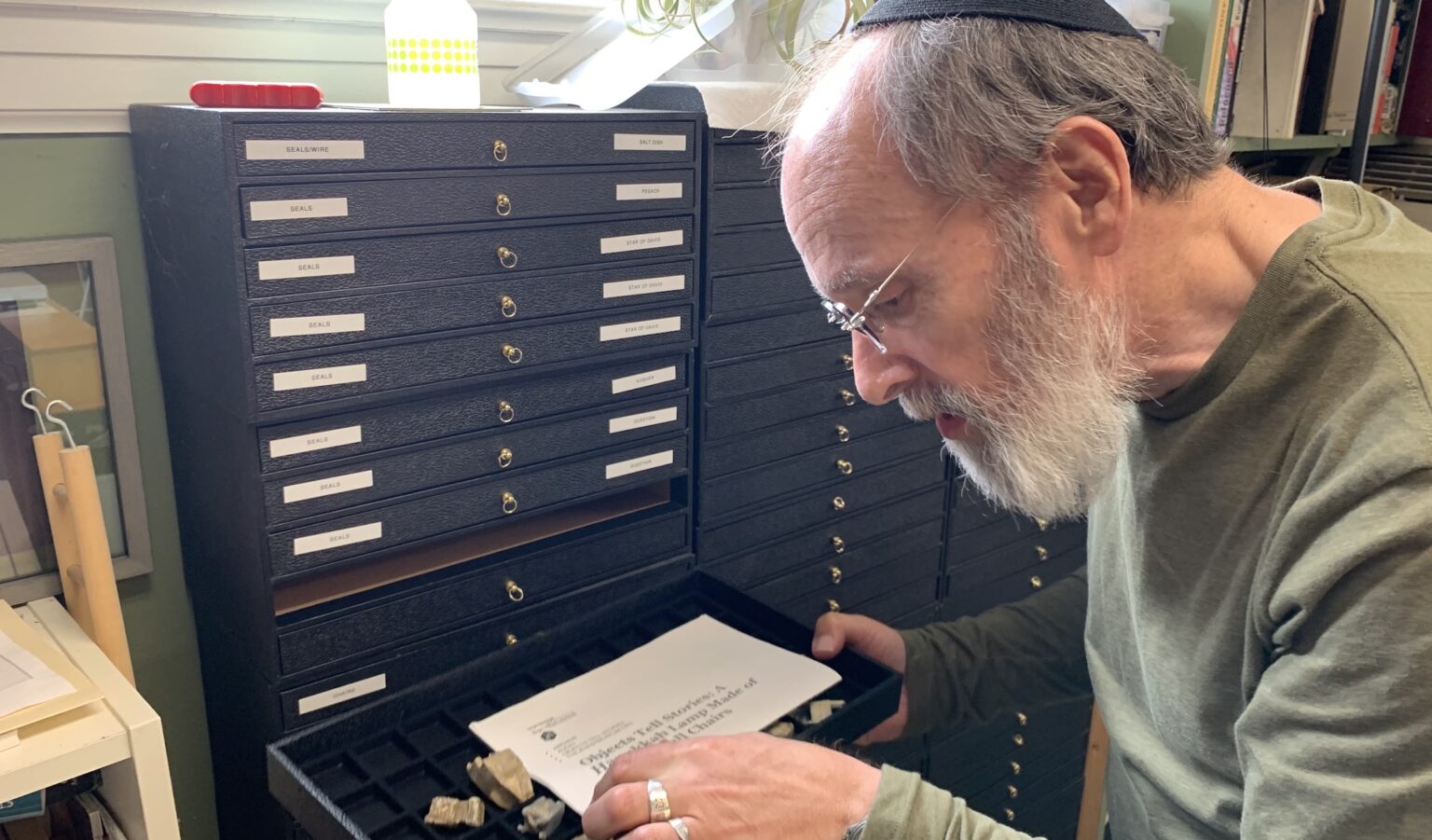 In stacks of black drawers, Arthur Kurzweil keeps thousands of artifacts from prewar Europe, including chairs that, when put side by side, create a Hanukkah menorah.

“There’s something very poignant about the idea that these were things that were used and loved and brought out at holidays and then essentially became trash,” he said.

Of course, the objects didn’t become trash so much as were turned into it by the Nazis and their collaborators.

“My assumption based on where they are found is that most of the people who were entangled with these objects were murdered in the Holocaust. So in a sense the collection becomes a Holocaust memorial,” Kurzweil said.

Kurzweil first purchased an unearthed amulet in the 1970s while on a trip to Przemyśl, Poland, a town where several members of his family had lived before World War II.

“When I saw my first amulet, my first pendant, I was just drawn to it. I was shocked that they still exist under the ground. I didn’t want them to disappear or to be thrown away,” Kurzweil said.

But it wasn’t until 2015, when Kurzweil traveled to Warsaw on his way to his father’s hometown of Dobromyl, that he learned about the tiny dreidels. The friend who showed him the objects introduced him to a metal detector hobbyist, part of a network of treasure seekers who comb regions of Eastern Europe that were devastated during the war.

The hobbyists that Kurzweil has encountered largely look for gold and silver coins to sell, though others hunt more specifically for Nazi paraphernalia, as detailed in “Plunder,” the recent book by Menachem Kaiser. Few are interested in holding onto detritus whose value is largely sentimental, and mostly limited to Jews. 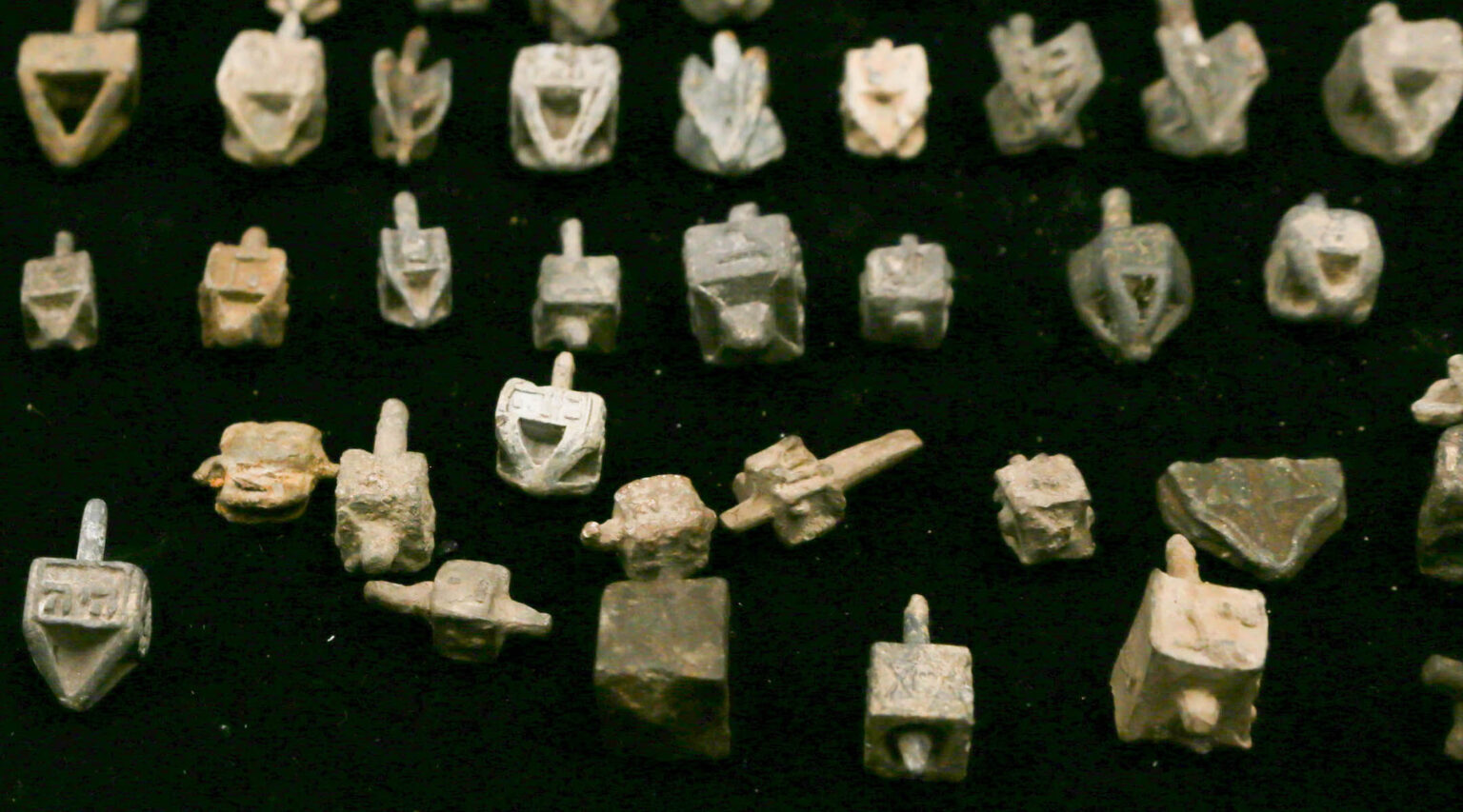 Many of the lead and pewter dreidels that Arthur Kurzweil has acquired are damaged, but their letters remain visible.

“Suddenly I had myself a network of people who are not really looking for Judaica, but they know that there’s a guy in New York who’s interested in this stuff and they contact me,” Kurzweil said.

For some of the hobbyists, Kurzweil said, the act of sending him the Judaica objects they found, often just for the cost of the postage, and thus interacting with a living Jew was clearly meaningful. “They like the fact that they’re doing something that’s saving the remnants of the Jewish community,” he said.

And for Kurzweil, too, the relationships with people in Eastern Europe are important. Kurzweil has traveled to Dobromyl 10 times and has gotten to know some of the people who live there over the years. In 2017, he even donated a playground to the town and raised over $22,000 to purchase supplies for the local school.

“Thank you to everyone who made this happen,” he wrote on the GoFundMe page for the school fundraiser. “Standing in front of the house where my father was born, I read each of your names to myself in a whisper. What a privilege it is to help children–anywhere in the world–to learn.”

If the objects Kurzweil collects act as a bridge between him and history, Kurzweil’s donations to the children of Dobromyl are firmly rooted in his desire to correct the relationships between those who hated each other in the past.

“The reason I wanted to build a playground was because these were innocent children,” Kurzweil said. “If it was the other way around, these would have been my neighbors. I don’t want to inherit hatred and bitterness.”

The mayor and the English teacher in town, who serves as Kurzweil’s interpreter when he visits, send him cards every Rosh Hashanah. He hopes to visit again one day.

“The Lubavitcher Rebbe once said if you encounter something, and you think you can fix it, then fix it,” Kurzweil said. “So when I got there, I thought I could fix it a little bit.”

Exactly what the future holds for Kurzweil’s collections is unclear. For now, he’s content to let their presence wash over him as he works on a memoir about his family’s story, including about his father’s prewar life in Dobromyl. But he’s starting to think about whether a museum should one day take them on — and he wonders whether any would.

Weingast, for one, says the collection is of value precisely because the objects within it have no value on their own.

“He’s accumulated a fantastic collection of everyday objects,” Weingast said about Kurzweil. “The objects are free, they’re of no value. But the expense is paying the people to find them and ship them and, you know, enticing people to not throw them away, to not just discard them.”