The Cincinnati Art Museum’s "Paintings, Politics and the Monuments Men" explores the intersection of history, politics, art and the controversial American tour of German-owned masterpieces in the 1940s.

If the title of an upcoming exhibition at the Cincinnati Art Museum (CAM) has a familiar ring, that’s probably thanks to George Clooney’s 2014 movie, The Monuments Men, which he starred in, wrote and directed.

But the CAM’s show — Paintings, Politics and the Monuments Men: The Berlin Masterpieces in America — is significantly closer to reality than the fictionalized film, which plays like a lighthearted men-on-a-mission buddy caper to save international artworks from being plundered or destroyed by the Nazi regime during World War II.

Established in 1943 under the Civil Affairs and Military Government Sections of the Allied armies, the Monuments, Fine Art and Archives program was an honorable endeavor to preserve cultural artifacts across Europe both during and after the war. The program protected (and returned) artworks, archives and monuments of historical significance that had been forcefully obtained by the Nazis between 1933 and 1945.

One of the central figures in the program was Walter Farmer, Cincinnati’s own “Monuments Man.”

Farmer, an architect and Miami University graduate who joined the Army and became part of the military engineering corps, directed the Wiesbaden Central Collecting Point in Germany, where, starting in 1945, paintings of tremendous cultural significance and value were gathered, documented and prepared for return to their rightful owners.

The efforts of Farmer and his team of museum curators, art historians and others trained to identify and care for works of art rose to significant national awareness when 202 masterpieces were brought to the U.S. for a touring exhibition in 1948 and 1949. Those works — a collection of 15th- to 18th-century paintings from Berlin’s State Museums — stopped in 14 cities and were viewed by nearly 2.5 million visitors, making it one of the first museum “blockbusters.” 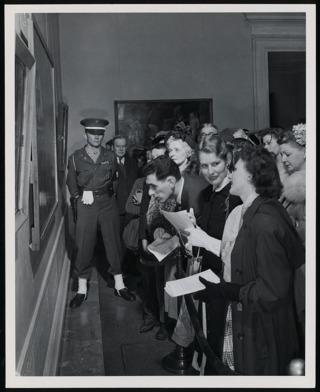 But the transfer of the artworks to the U.S. was controversial. The paintings from the two German state museums were not forcibly pillaged from private collectors, but rather publicly owned works that Adolf Hitler and Hermann Goering took control of and stored in remote salt mines to protect them from Allied bombing, intending to install them later in Nazi-operated institutions. When the American military decided in 1945 to ship hundreds of these masterpieces to the National Gallery ofArt in Washington, D.C., Farmer and his colleagues were shocked and issued a strong protest. 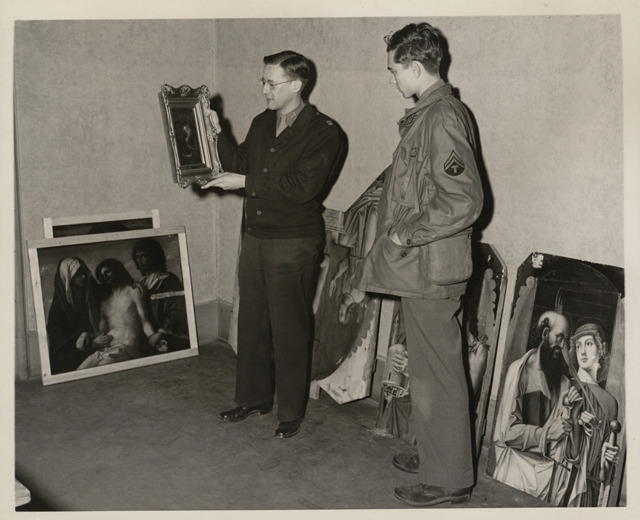 In what came to be called “The Wiesbaden Manifesto,” they expressed their opposition to the removal of the artworks, concerned that they could be absorbed into the collections of American museums.

“We are unanimously agreed,” they wrote, “that the transportation of these works of art, undertaken by the United States Army, upon direction from the highest national authority, establishes a precedent which is neither morally tenable nor trustworthy...We wish to state that from our own knowledge, no historical grievance will rankle so long, or be the cause of so much justified bitterness, as the removal, for any reason, of a part of the heritage of any nation, even if that heritage may be interpreted as a prize of war.”

The CAM exhibition, assembled by Peter Jonathan Bell and Kristi A. Nelson, explores the moral implications of the removal of hundreds of masterpieces from Germany to tour North America.

“Farmer very eloquently wrote that this was not the values that brought America into the war,” says Bell, CAM’s curator of European paintings, sculpture and drawings.

He and his colleagues believed that transporting the art for display in the U.S. was uncomfortably similar to the Nazi’s unauthorized commandeering of masterpieces for their own purposes.

The Monuments Men’s protest of this morally ambiguous episode fell on deaf ears, and the success of the exhibitions in American cities from coast to coast (with Ohio stops at art museums in Cleveland and Toledo), followed by the return of the artworks to German museums, diminished their outspoken criticism. But the implications continue to have resonance in a war-torn world where the cultural treasures of nations such as Syria are at risk. 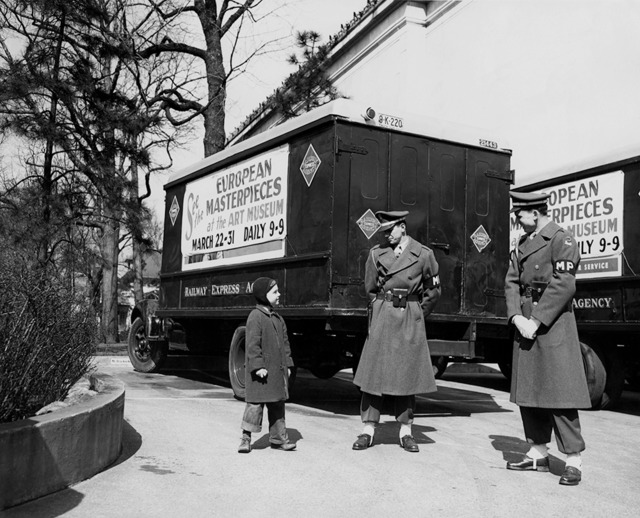 Military transport vans for the exhibition "Paintings from Berlin Museums"

“There were questions about the morality of bringing all these works to America,” Bell says, “but the sheer delight and edification of so many Americans was on the other side of that equation.”

Bell’s and Nelson’s exhibition could not, of course, present all 202 works that toured in the 1940s; those form the core of today’s Gemäldegalerie collection in Berlin. But using two CAM galleries, it does offer about 25 works and features four paintings that were part of the “202” tour, including Botticelli’s “Ideal Portrait of a Lady” from the late 15th century.

To provide a broader sense of the earlier exhibition, pieces from the CAM’s own collection made by artists whose works toured will be on view, as well as a few from the National Gallery and the Getty Museum in Los Angeles. That will give visitors a strong sense of what attracted hundreds of thousands of Americans to stand in long lines, eager to view the masterpieces.

The CAM show simultaneously explores political issues generated by this historical event, offering photos and newspaper clippings showing the artworks stored in the salt mines, crowds flocking to museums, the works arriving via military convoys and their local arrivals, which attracted as much public attention as the masterpieces themselves.

This show is only happening in Cincinnati (it was originally scheduled for last summer but postponed during the COVID-19 pandemic) and is here because Walter Farmer lived in the Queen City from the end of the war until his death in 1997.

He was an interior decorator and lectured at CAM, at the University of Cincinnati, and at Greenwich House Interiors, where he worked. A group of CAM supporters who knew him — Shannon and Lee Carter, Marty and Nick Ragland, Joyce and Jack Steinman, John Steele, and Ellen Rieveschl — advocated for the show.

Farmer’s commitment to the ethical treatment of art continued after the works were shipped to the U.S. He remained in Wiesbaden through 1946, Bell says, “and he mounted exhibitions of (other) art there to show the German citizens that the American Army was taking good care of their cultural patrimony. He wanted to show them that these artworks were there for everyone — not war booty.”

In 1996, Farmer received the German government’s Federal Cross of Merit, its highest recognition, acknowledging his role in this extraordinary episode. His medal is also on view in the CAM exhibit.

“The show is a combination of art, history and politics,” Bell says.

It’s a fascinating exploration of the intersection of issues that remains relevant in today’s world.

Paintings, Politics, and the Monuments Men: The Berlin Masterpieces in America will be on view at the Cincinnati Art Museum July 9-Oct. 3. Tickets are $10 general admission; $5 for students, seniors and children 6-17; and free for members. Active-duty military, reserves, retirees and veterans of the United States Armed Forces can receive a free three-month membership. More information: cincinnatiartmuseum.org.