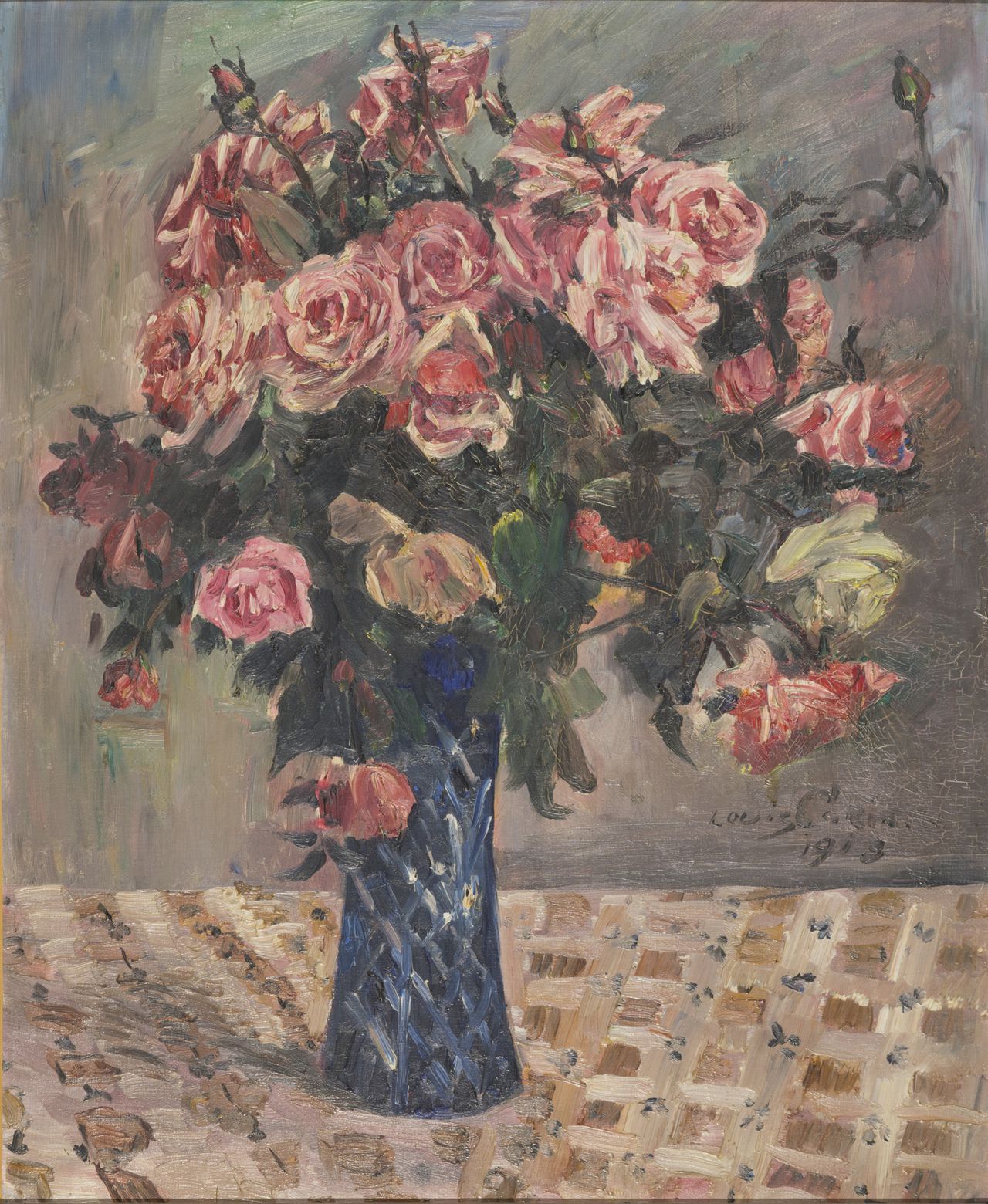 To read the rest of the article in Dutch, click here for p.1 and here for p.2

The Brussels Museum of Fine Arts is returning a painting by Lovis Corinth to its rightful Jewish owners. It was seized by the Nazis in Brussels during the Second World War and was listed in the museum as looted art.

The return of the Blumenstilleben painting follows a claim by the Berlin law firm Von Trott zu Solz Lammek, an authority on Nazi looted art. The firm submitted its request for restitution as early as the end of 2016. But it took until now for the file to be finalised and for the State Secretary for Science Policy Thomas Dermine (PS) to put his signature to it. He says he is happy that the painting can be returned to the family. It is undoubtedly a small gesture,' he says, 'but it is a reparation for a cowardly robbery and shows that we must never lose faith in justice'.

The German artist Lovis Corinth painted Blumenstilleben in 1913. Two years earlier he had suffered a stroke, after which his style became looser and he moved more in the direction of expressionism. The Nazis would hold him responsible for this. When they swept through the German museums in 1937, 295 of his works of art were banned. Seven of them were pilloried at the Entartete Kunst exhibition. Pieces of them were sold at an auction in Lucerne. It is there that the Museum of Fine Arts of Antwerp bought Portrait of Georg Brandes. It is still in the collection.

Fortunately, Corinth never had to experience this himself. He died in 1928 of pneumonia while travelling in the Netherlands.

Blumenstilleben came to the Netherlands via a Jewish family on the run. After the liberation, the painting was found in Brussels in a depot where the Nazis were storing art. In 1951, it was donated to the Museum of Fine Arts in Brussels.

After it was stolen, it never left our country. Until 2010, the still life hung in the gallery - when the modern art collection was moved to the depot, the painting moved with it. On the museum's website, it was listed as looted art: at first fairly deeply hidden, but in recent years more prominently.

While the Brussels website was looking for the owner of the painting, the relatives of the painting did the opposite. In 2011, they placed an appeal on the German website Lostart.de to find the painting. They did so in the name of the Mayer family, and searched for 29 other paintings. Among them were many landscapes, but also two works by Lovis Corinth and Max Liebermann. Each with the caption 'Brüssel, Beschlagnahme 1942-1943'. Once upon a time, the data of those two websites had to match.

Dermine wrote to the lawyers that the painting was investigated twice in Belgium. The first time by a research group into Jewish looted art that completed a three-year study in 2001. They were unable to determine the provenance of the painting. After a claim was made at the end of 2016, another investigation was carried out. Again without result. Dermine wrote that it is 'most likely' the painting belongs to the Mayer family and therefore is returning it.

Based on its own archival work, De Standaard was able to reconstruct the events.

On 22 November 1938, the Mayer family finally set foot on Belgian soil: father Gustav (82), his wife Emma (73) and their son Ernst (47). From the period before that, their file at the Aliens Police only contained letters from lawyers. They had been trying for months to help the family get a residence visa. In the meantime, they stayed in a hotel in San Remo. According to their migration documents, they had already left Frankfurt in mid-May. Their doctor's certificate states that they were healthy, and free from 'ansteckenden Krankheiten' (infectious diseases).

Yet, in August 1938, State Security informed them that they were not allowed to enter the country. The lawyers then immediately turned to other avenues. They pointed out that the industrialist family was well educated and would not compete with anyone on the labour market.

Without embarrassment, they tried to touch a nerve. Did the Service not want to change its judgement so that 'le vieux Mr Mayer puisse finir en paix les quelques années qui lui restent à vivre'. A few months later, the service would, but only after Mayer had signed a declaration in which he said he would not engage in any lucrative activities and would invest two million francs in Belgian funds or Belgian companies within three months. A week later, they were in Brussels.

After that it remained quiet for the family. Only on 25/4/1941 is there a form that shows that they had moved from their address at Wetstraat 200 into a boarding house. It seems that the Nazi occupiers had missed that boat. After the war, son Ernst would declare that he had already arrived in England in August 1939. Le vieux Mr. Mayer' died in Bournemouth in January 1940. He did not enjoy his freedom for long.

But the occupying forces did not leave it at that. The bird may have flown, but his nest was still there. The Mayer family had had their belongings brought from abroad in crates to Brussels. They were stored at the North Station by the transport company Continental Menkès, ready to be shipped on to England.
As with all shipping companies, the Nazis demanded lists of customers. The company did not have much to say about this. Its director Hugo Menkès was himself an Austrian Jew who, for security reasons, was 'traveling' in California.

In the client lists, the Nazis searched for enemies of the Third Reich. They found properties of Americans, British and people they suspected of being Jewish. They were not always sure about the latter - 'douteux' was written in brackets - but they confiscated the properties just to be sure.

One of the lists included Ernst Mayer, under serial number 5998. Entnahme des Umzugsguts', says a consignment note on 7/4/1942, as if it was an export order from Zalando. They took everything. But despite their rapaciousness, the Nazis left an inventory in duplicate, as well as an invoice for the storage costs in triplicate. As if that was the right thing to do.

One of these inventories is in the Reichstag. It takes up three full pages and lists 375 items. I feel like a voyeur when I read through it. It is none of my business what possessions this family had. But it is still less serious than breaking open their transport crates and appropriating their possessions.

The family had clearly prepared for a new life. They had taken everything with them: tables, chairs, sets of cooking pots and an ironing board. Even rolls of curtains and carpets, a record player, a sewing machine and a piano. Should they really have brought a bucket? And what would that suitcase with keys have been for? It also says regularly, sixteen times in all, 'un tableau emballé'. Which painting, by which artist or what was on it, was of little interest to the Nazis. They saw that later.

Ernst Mayer remembered it well. After the war he gave a detailed description of the paintings. Of Blumenstilleben he said: 'Red and pink roses in a vase on a tablecloth. More precisely: the outer petals of the red roses were pink. They were in a long blue porcelain vase on a brown checked tablecloth. The flowers were very much alive.'

His testimony was decisive for the return of the painting. It is not hard evidence. But apparently our country wants to be lenient in a matter in which it lags light years behind other countries.

When asked, the cabinet says: 'Based on the available elements, it is almost certain that this is the painting that was stolen from this family'.

De Standaard journalist Geert Sels is an associate researcher at Cegesoma, the Study and Documentation Centre on War and Contemporary Society.