Top Collectors Don’t Like to Discuss Their Families’ Nazi Ties. Now, Artists Are Forcing Them to Confront the Past

A new generation of artists and activists is sparking a formerly taboo conversation. A cyclist rides by two billboards put up by local artists to protest against the nearby Christian Friedrich Flick Collection at the Hamburger Bahnhof Museum in Berlin in 2004. The signs say "free admission for former forced laborers" and "tax-evaders show us your treasures."

Last fall, German-Jewish artist Leon Kahane installed a work down the street from art collector Julia Stoschek’s exhibition space in Berlin. Though it was not part of the esteemed collector’s program, its proximity was intentional: Kahane’s video installation Jerricans to Can Jerry touched on Stoschek’s family history. In the looping video, an animated jerrican sits on an armchair, smoking a pipe, and discussing Stochek’s great-grandfather’s company, Brose, and its involvement in World War II and the exploitation of forced laborers.

Not long after the work’s debut in September 2020, the industrial heiress’s family legacy came under a far harsher spotlight. The journalist and satirist Jan Böhmermann—Germany’s answer to John Oliver—said in an episode that was viewed nearly two million times that Michael Stoschek, Julia’s father, had effectively pressured his hometown of Coburg to rename a street after his grandfather, Max Brose, a Nazi party member who had profited from Jewish expropriations and slave labor. (This allegation was stated in other reports; it has also been disputed by some local politicians who say they came up with the idea themselves.) Julia Stoschek, Brose’s great-granddaughter, is a partner of that same company.

Stoschek’s family story is, of course, not singular. The silent continuity of power and wealth rooted in the Nazi era is more the rule than the exception in Germany’s economy today. Even in left-leaning artistic and cultural milieus, this past is not often discussed in depth. 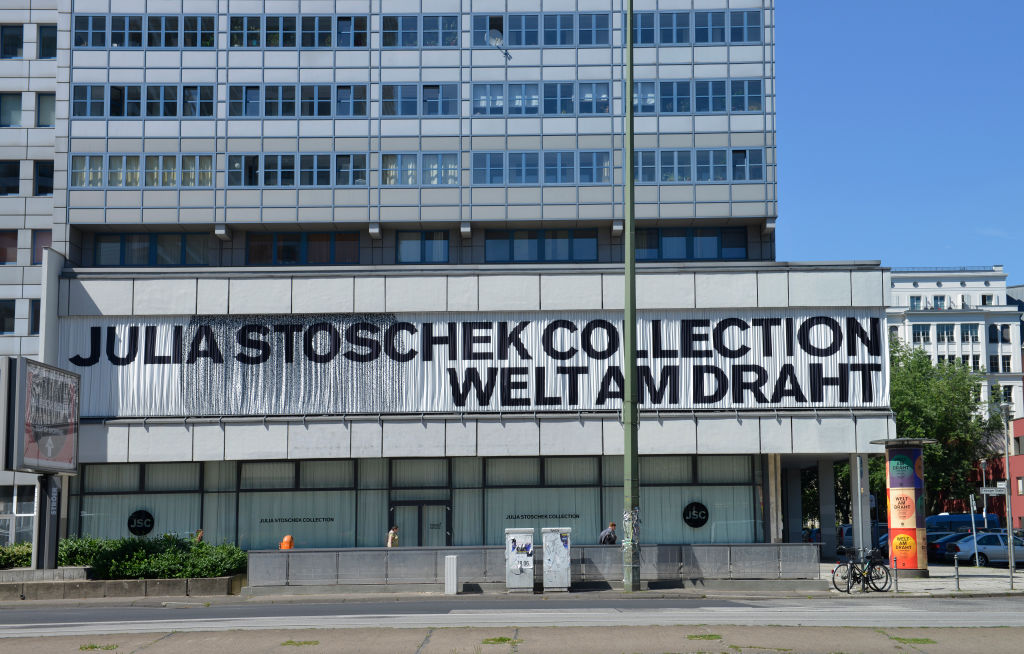 Despite her progressive program, however, the collector has remained relatively silent on her family history, save for a statement recently added to the collection’s website. “Between 1939 and 1945, up to 260 forced laborers were sent by the regime to work at the Max Brose & Co. metalworks,” it states, adding that the family had commissioned a historian to assemble a report on its business history that was published in 2008.

For some, that is not enough. “The revisionist way the Stoschek family deals with their own family history creates a toxic environment that affects every artist and every institution that she is involved with,“ Leon Kahane told Artnet News. “It becomes a structural problem.”

Kahane is part of a new new generation seeking to chip away at this culture of silence and asking hard questions of German patrons—as well as of themselves. 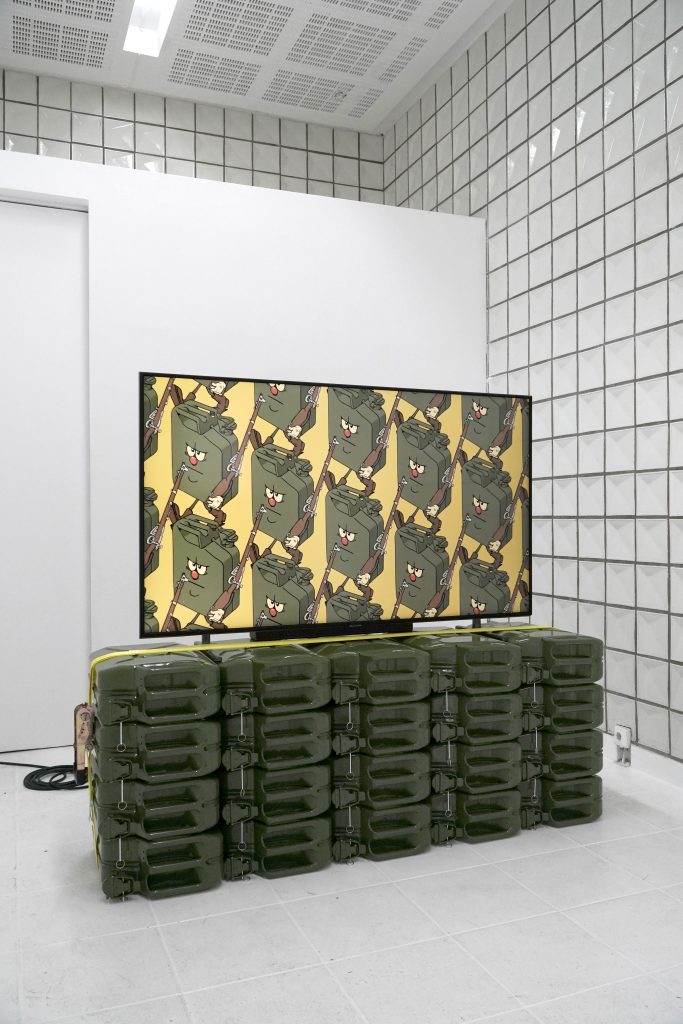 Film still from Leon Kahane’s Jerricans to can Jerry (2020).

A Question of Questioning

Germany’s historic approach contrasts with a broader movement around the world to tackle the ethics of funding head on. From the Sydney Biennale participants who boycotted its chairman over his company’s links to detention centers in 2014 to the Serpentine’s decision to drop the Sackler name and the Musée d’Orsay’s restitution of Gustav Klimt’s looted Apple Tree this year, the art world is under renewed pressure to reexamine and clean house of funding with dubious sources.

Cultural figures with wealth stemming from family ties to the Nazis include Friedrich Christian Flick, who owns a formidable trove of 2,500 contemporary and modern artworks. Flick’s grandfather, Friedrich Flick, built a major corporation that supplied the Nazis with arms produced by at least 40,000 slave workers in factories expropriated from Jews. When his grandfather died, his son and grandson, the younger collector Friedrich Flick, inherited part of that wealth.

The Flick family story resurfaced last year when the collector removed prized works by artists including Nam June Paik, Bruce Nauman, and Martin Kippenberger from Berlin’s Hamburger Bahnhof, re-igniting debate about why the institution had accepted the long-term loan in the first place given his family’s past. 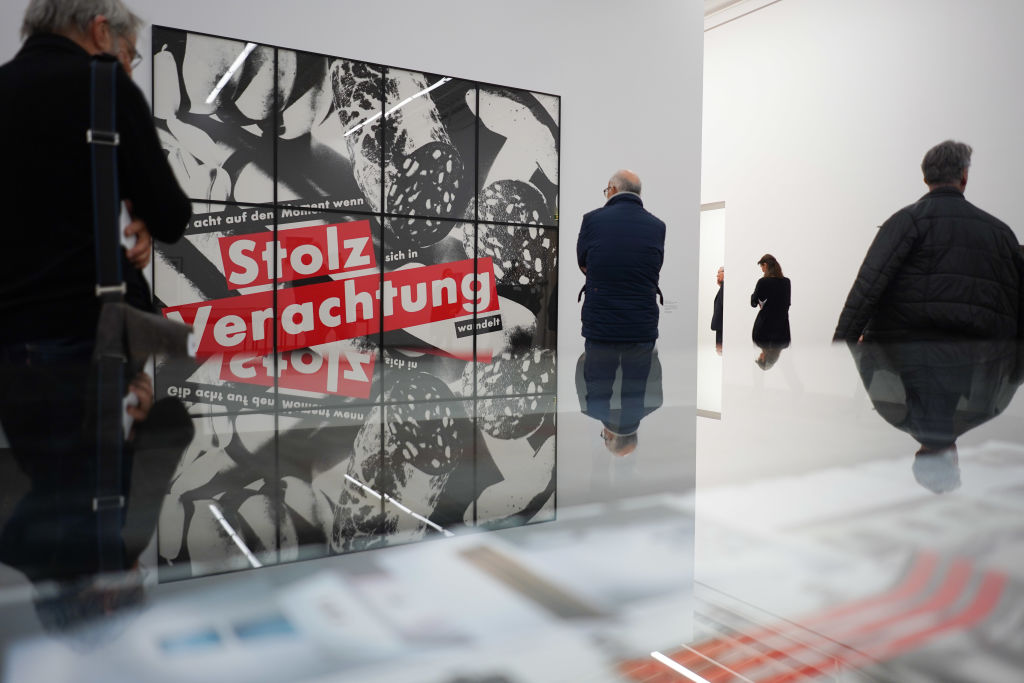 Notably, Flick made that loan after trying and failing to establish a private museum in Zurich due to controversy surrounding his grandfather. Flick did not respond to a request for comment from Artnet News, but has said in the past that “you can’t inherit guilt.” His collection’s website also states that Flick “has always distanced himself from the actions of his grandfather during the Nazi regime.”

How to handle these patrons at a moment when museums around the world are being pushed to open up about their dark pasts is a vexed issue. The majority of German cultural institutions are marked by skepticism of identity politics and so-called “cancel culture”—especially when it threatens the national self-perception of having justly atoned for the horrors of the Holocaust.

But there are exceptions, like the Oetker art collection in Bielefeld, whose owners voluntarily commissioned art historians to look into their corporate collection in 2017 to identify and return looted artworks. 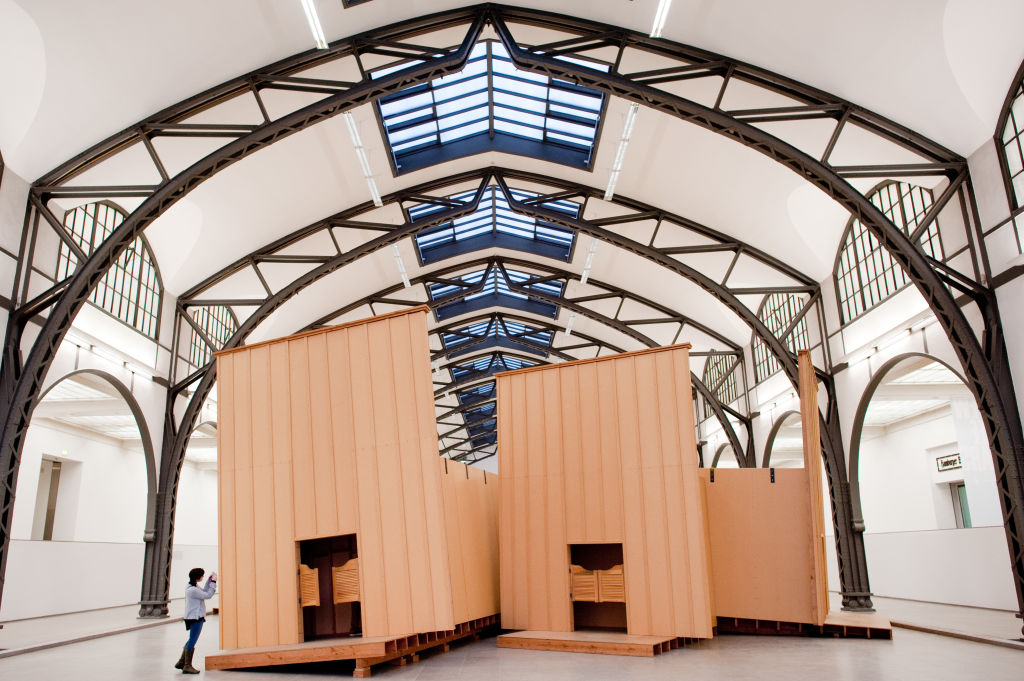 The Hamburger Bahnhof’s exhibition “A Few Free Years: From Absalon until Zorneding” with a selection of works donated by the collector Friedrich Christian Flick.

What Were Your Grandparents Doing During the Nazi Era?

Renewed debate erupted in February when artist Moshtari Hilal and political geographer Sinthujan Varatharajah hosted a two-hour Instagram talk on the presence of Nazi money in the cultural sector. Having been asked about their own histories as the children of refugees, the speakers turned the question back on their audience: “What about your background, your Nazi background?”

The event hit a nerve. The phrase “Nazi background” began ricocheting across the web as millennials began to share their own family stories on social media via the hashtag #MeinNaziHintergrund (#MyNaziBackground).

Users have been sharing poignant anecdotes about their grandparents, often openly processing their confusion at having loved ones who were members of the Nazi party. Emilia von Senger, the owner of a queer-feminist bookstore in Berlin, said the Instagram talk sent an “important signal” that prompted her to make her family’s involvement in World War II transparent on her corporate Instagram account.

The same young Germans exploring their grandparents’ histories have also begun pressuring elites to take a closer look at their own legacies. On the social account This Is Germany, Hilal, Varatharajah, and Berlin-based artist Candice Breitz invite cultural figures like curator Bettina Steinbrügger of the Hamburger Fine Arts Academy to discuss the continuity of Nazism.

Until now, this sort of confrontation remained a niche discussion among German Jews and academics, despite some surges of interest in the topic around the 1968 student movement and after German reunification in 1989.

The shift was praised by American Holocaust historian Michael Rothberg, who described the movement in an op-ed Berliner Zeitung as “an opportunity to address the paradox at the heart of German society: the imperative to acknowledge the particular and the universal dimensions of historical responsibility.”

Not everyone has been supportive, however. A few prominent German cultural critics have lumped the discussion into a new “cultural war.” Editors of the conservative newspaper Welt went so far as to call the Instagram talk’s hosts “racists,” dubbing them “Woko Haram.” Film still from Leon Kahane’s Jerricans to can Jerry (2020).

Hitler was willfully voted into power while denazification was forced upon Germany by the Allies. Postwar atonement was imperative in order for Germany to be welcomed back into the international community. Yet beyond the erection of monuments, political speeches, and the repeated mantra “never again,” Nazi collaborators were largely given a carte blanche after the war.

Many went on to contribute to Germany’s postwar economy. Take the notable case of chemist Fritz ter Meer: Tried for war crimes as a board member of IG Farben, the company that produced Tarbon gas for the concentration camps, he returned to its successor company, Bayer AG, after serving three of his seven years of prison time. He was venerated with garlands, eulogies, and portraits by the corporation until just a few years ago.

Most of the corporations that profited during the war blocked reparation claims and have only taken responsibility more recently, often only after public pressure. While the 1951 Claims Conference worked toward material reparations for Jewish people, many of the claims made there only gained momentum after the U.S. suggested it might boycott German products until the country reckoned with its Nazi past. 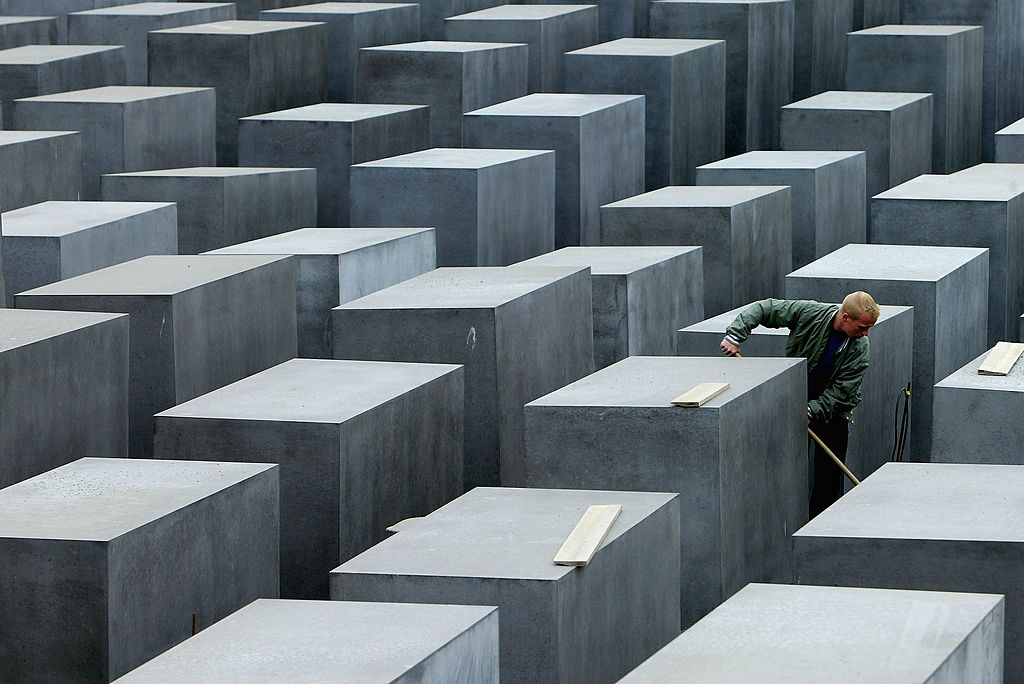 Worker sweeps up between the approximately 1400 concrete slabs, or stellae, that have thus far been laid at the Memorial to the Murdered Jews of Europe at the memorial’s construction site July 13, 2004 in Berlin, Germany. The memorial, designed by New York architect Peter Eisenman, eventually included 2,700 stellae

In 2000, the Foundation Remembrance, Responsibility and Future, often called the Forced Labour Fund, was established to advocate for millions of slave workers from the Nazi era. Half of its €10 billion budget was funded by taxpayers and the other half by corporate Nazi profiteers, including BMW and Volkswagen, which paid a one time donation of €5 million each. The art-collecting Oetker family supported the project; Stoschek’s family contributed as well. After so many years, it was a major step forward.

Flick, for his part, initially declined to contribute, opting instead to set up his own foundation with a mandate to fight racism. Following public criticism, he donated to the Forced Labour Fund in 2005. 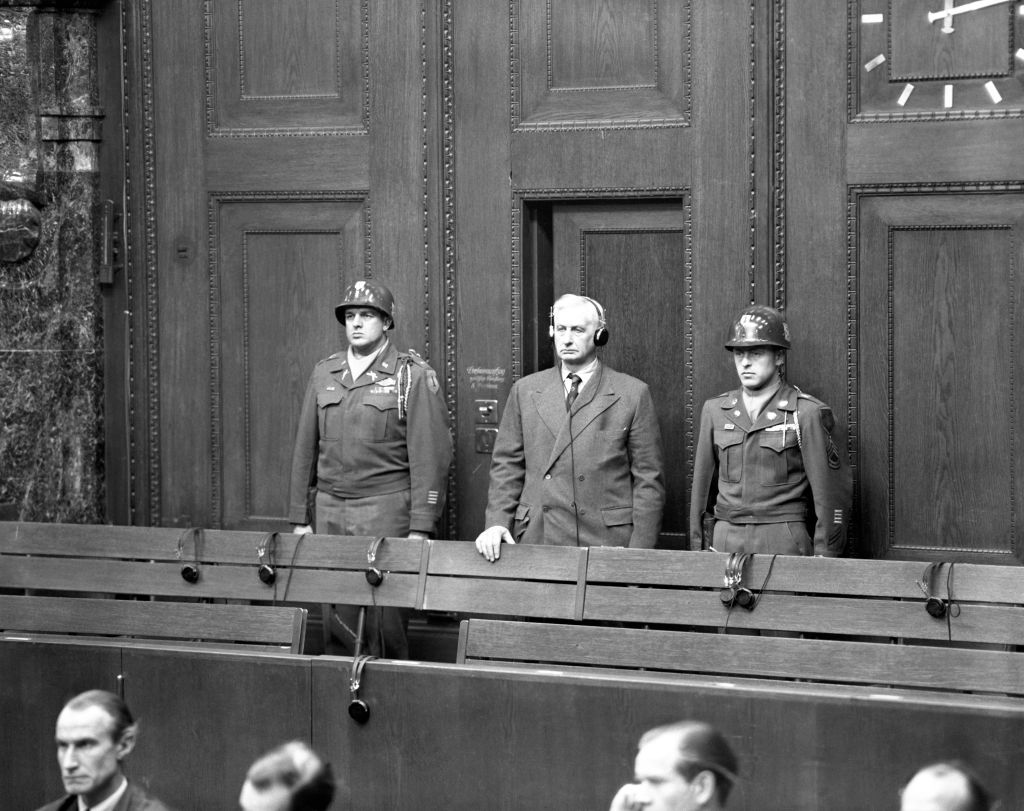 Convicted Nazi war criminal Friedrich Flick at his sentencing in 1947. He was sentenced to seven years in prison. After having served a prison sentence, Flick became successful again in the late 1950s and was one of the richest citizens of West Germany.

Robert Schulte, the head of the Julia Stoschek Collection, said that the recent surge of questions about funding “is important and the topic should be taken seriously. Promoting art that is open to the public must go hand in hand with transparency.” He added that the collection has also begun to diversify its funding for the first time, securing grants from the city of Düsseldorf.

In response to a request for comment from Stoschek herself, Schulte directed Artnet News to the collection’s official statement, which includes text copied from Brose company’s website, added recently in response to a growing number of inquiries. It points to a report commissioned by the company about the family’s activities during the Nazi regime. (The report, which stated that company founder Max Brose was considered only a “Mitläufer” or a “follower,” was also been criticized with a claim that the commissioned research could not have been independent enough.)

While opting not to speak about her family’s past directly, Julia Stoschek has promoted artists whose work focuses on issues of justice; the collection’s current exhibition explores the themes of violence and oppression.

But some members of the next generation say there is more left to do. “The so-called Vergangenheitsbewältigung—which means overcoming the past—is a constant act of establishing a culture of responsibility towards history and its continuities,” said artist Kahane. “As long as their people today suffer from their past, we need to deal with that past.”