In the 1930s, the Mosse family left their extensive trove behind in Germany. Some works have now been traced to Israel, prompting a search for more looted art the museum may have

A 17th century Flemish tapestry that hung in the Tel Aviv Museum of Art from 1971, later restituted to the original owners, the Mosse family in Berlin

As Israel commemorates Holocaust Remembrance Day, the Tel Aviv Museum of Art is about to complete the restitution of two 17th century Flemish tapestries looted by the Nazis during World War II.

The tapestries, along with a 19th-century oil painting already restituted, are the first instances of Holocaust-looted art found at the Tel Aviv museum. All three artworks belong to the Mosse family of Berlin, which had been the holder of a significant art collection.

As Israel commemorates Holocaust Remembrance Day, the Tel Aviv Museum of Art is about to complete the restitution of two 17th century Flemish tapestries looted by the Nazis during World War II.

The tapestries, along with a 19th-century oil painting already restituted, are the first instances of Holocaust-looted art found at the Tel Aviv museum. All three artworks belong to the Mosse family of Berlin, which had been the holder of a significant art collection.

Now the museum is looking to see whether other pieces in its collection may need to be restituted as well.

“When the museum was established by [Mayor Meir] Dizengoff, it was the beginning of the 1930s and a lot of Jewish people were trying to get out of Europe and we had a lot of bequests. It’s part of our DNA,” said curator Sophia Berry Lifschitz. “But this is first time a restitution is being realized in our museum.”

It was not the first time in Israel, though. The country’s flagship Israel Museum, located in Jerusalem, restituted several works of art and Roman artifacts starting at the beginning of the 21st century.

‘From Darkness to Light” by the Dutch artist Jozef Israels, was restituted to the original owners, the Mosse family, and then purchased back by the Tel Aviv Museum of Art


The museum found out about the 19th century oil painting four years ago, after receiving a simple email from a German lawyer representing the Mosse Art Research Initiative, a project established by the family to locate looted art and aid provenance investigations.

The painting in question, “From Darkness to Light” by the Dutch artist Jozef Israels, had been donated to the museum in 1993 by art collector Motti Rubinstein who had purchased it from art dealer and Holocaust survivor Meir Stern. The painting had made its way among auction houses over the decades before being purchased by Stern, a Tel Aviv art gallery owner.

The melancholy painting has been exhibited at the museum from the beginning, at the very center of the Jozef Israels collection, said Berry Lifschitz.

“Everyone was pretty innocent about these kinds of things back then,” she said. “Now when I have people who want to donate to the museum, we check the provenance every time, just to be sure.”

It turned out that the museum itself had proof that the piece belonged to the Mosse family. When Berry Lifschitz began researching the matter in response to the request, she came across an art catalog in the museum library published by the Mosse family that featured “From Darkness to Light.”

The formal process of proving the piece’s provenance was straightforward, said the curator. Documents showed that the painting had been part of the Mosse family collection, which had been left behind when the family fled Berlin in 1933, and then sold by Lepke, an auction house used by the Nazis.

The Tel Aviv museum initially thought it would have to return the painting, but it raised enough funds to purchase it from the Mosse family, at a price based on auction house Sotheby’s estimate.

It’s fairly common for museums to purchase back restituted Holocaust art, said Berry Lifschitz, as the third generation of the family overseeing the restitution process usually has no specific emotional connection to the artwork.

“They want justice, they want the story to be told,” she said.

Now the story of “From Darkness to Light” is being told in full, on the label accompanying the painting, which is currently on loan to the Israel Museum as part of another exhibit.

“The label will say restituted from the Mosse family and that’s part of the agreement, because that’s what the family was looking for,” said Berry Lifschitz. 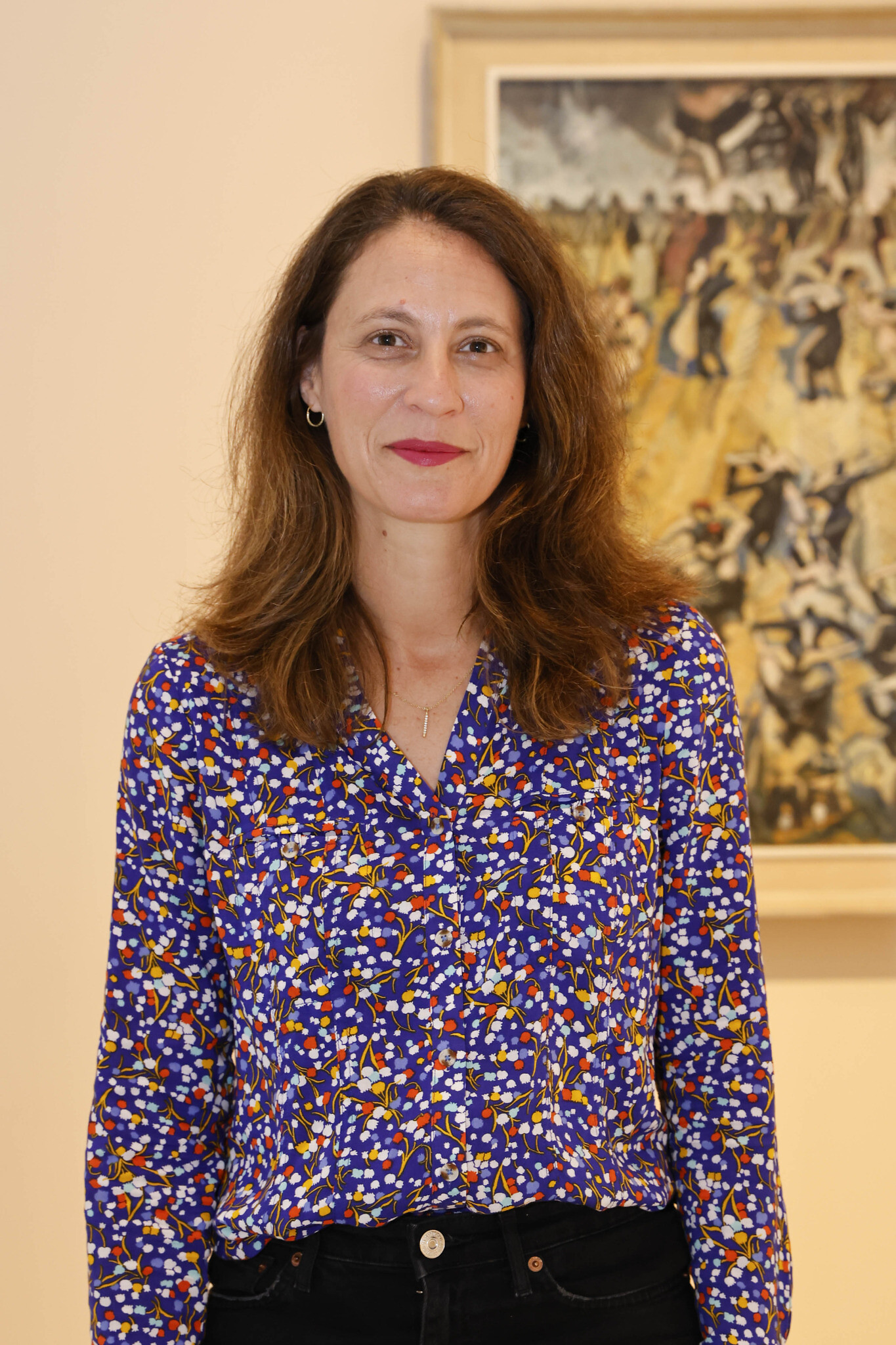 The Mosse family owned an extensive advertising business and publishing house in Germany and was heavily involved in educational and philanthropic work as well as the tremendous art collection, which included thousands of artifacts stored at home in Berlin’s Mitte district.

The house was abandoned when they fled to Switzerland and the artifacts left behind were offered to the public. According to the Tel Aviv Museum of Art, some 650,000 artworks are currently scattered around the world.

Two years ago, the museum received another email from Mosse Art Research Initiative, which was looking into two more missing artworks, the 17th century tapestries. 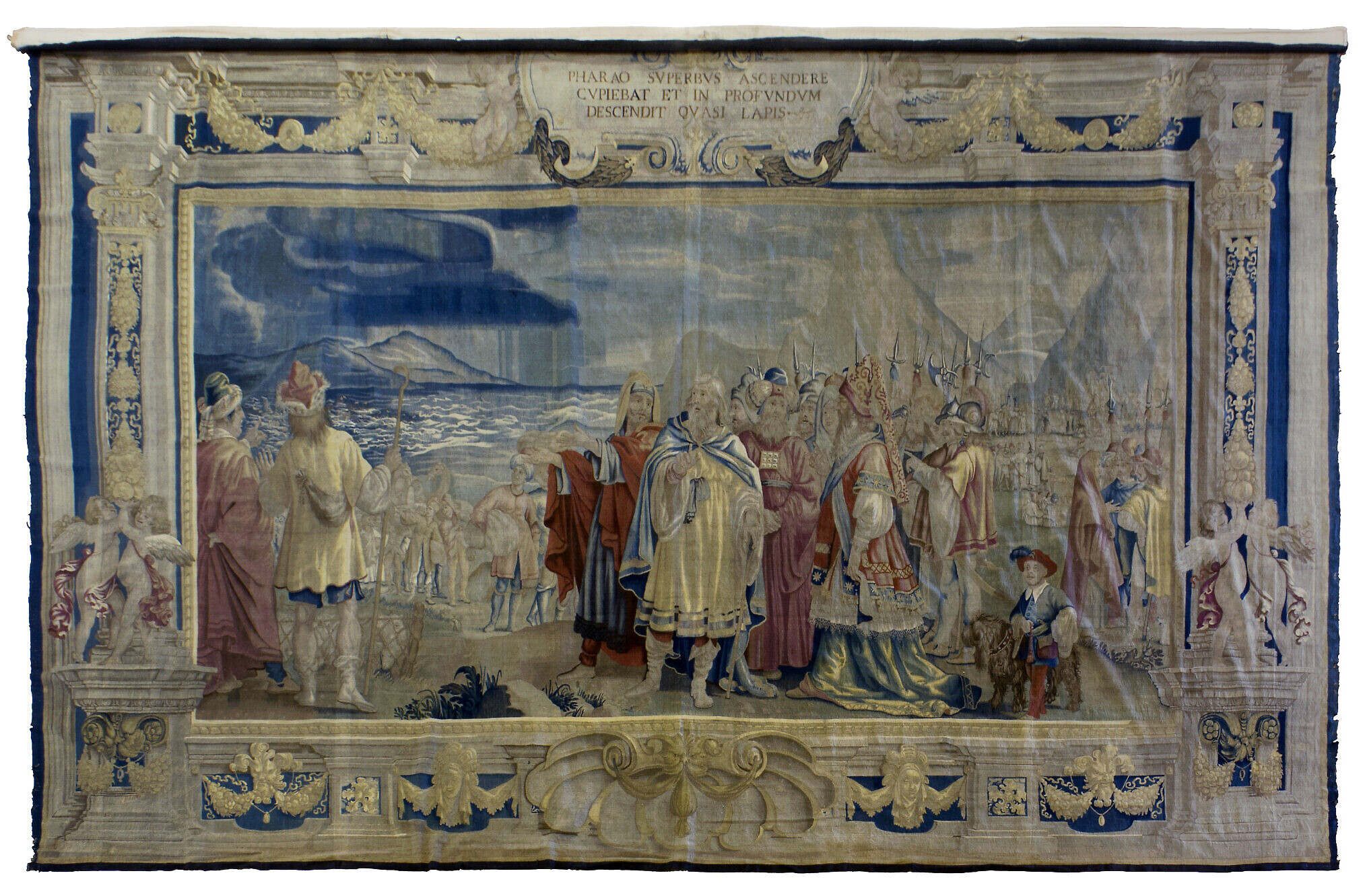 A 17th century Flemish tapestry representing the crossing of the Red Sea, discovered as a piece of Nazi-looted art in the Tel Aviv Museum of Art

The two massive tapestries representing Moses in the cradle and the crossing of the Red Sea had disappeared in 1933 and never appeared at the Lepke auction house. They reappeared at an auction in the 1960s, when they were purchased and then donated to the museum in 1971 by Sir Isaac Wolfson. 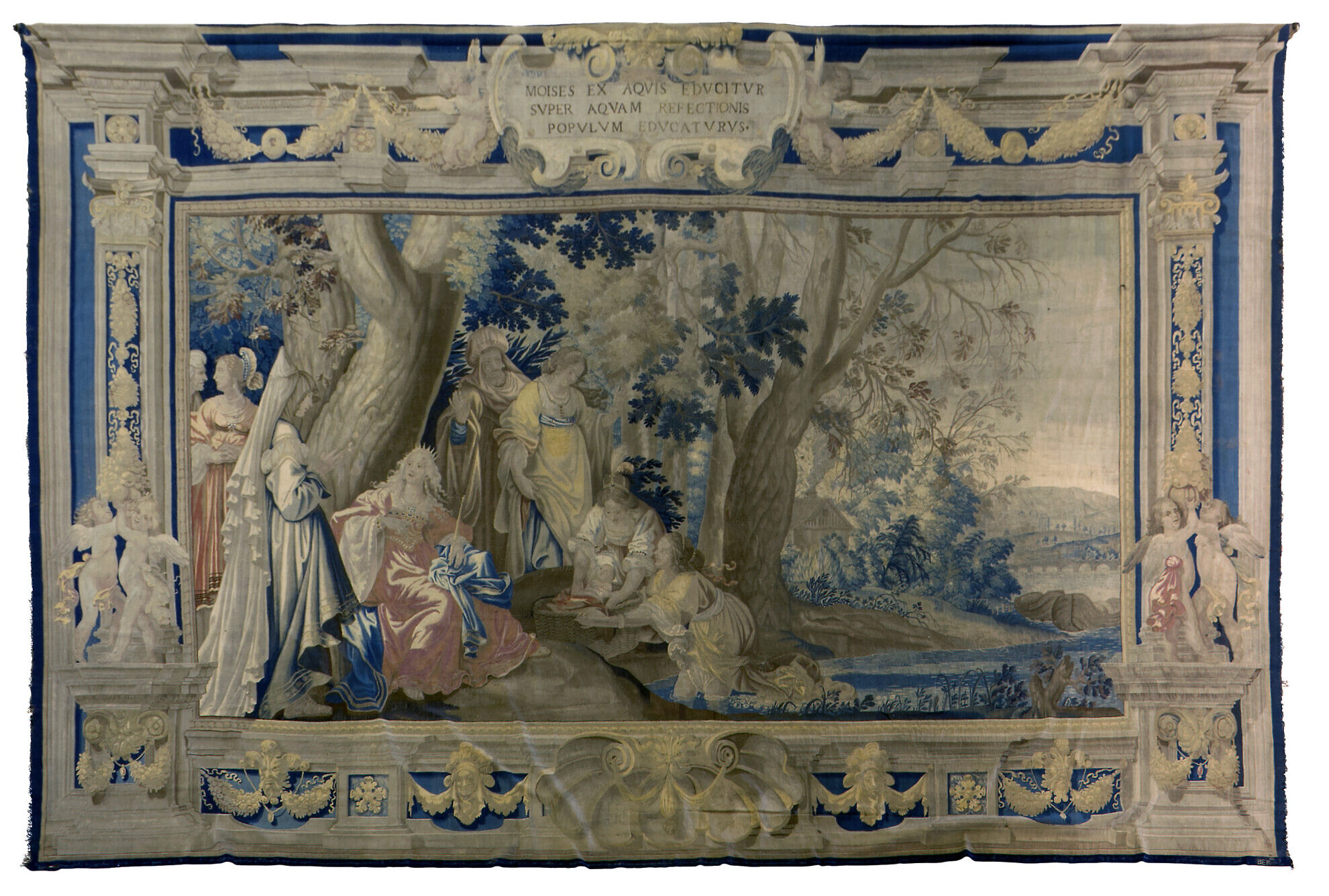 A 17th century Flemish tapestry representing Moses in the basket, discovered as a piece of Nazi-looted art in the Tel Aviv Museum of Art

When the new building of the museum opened that year, the two tapestries were hung in the entrance hall.

They’ve been in storage for many years, said Berry Lifschitz, and had to be taken out and photographed for the restitution case.

It wasn’t as straightforward to prove the provenance of the tapestries, which never appeared at a Lepke auction, and had simply disappeared from the collection in 1933.

The opening of the new building of the Tel Aviv Museum of Art in 1971, with the two 17th century Flemish tapestries hanging in the entrance hall

The museum is in the process of returning the tapestries, but asked the family to cover the price of shipping them.

“We’ll part from these two and most likely they’ll go to auction,” said Berry Lifschitz.

As a result of the three looted pieces of art, the Tel Aviv museum is taking proactive steps to determine whether it holds any other pieces of looted art.

“Restitution is an ethical and professional obligation,” said Tania Cohen-Uzieli, director general of the Tel Aviv Museum of Art.

In recent years, said Cohen-Uzieli, the study of the provenance of works of art has become a major concern of museums around the world. Museums allocate major resources to provenance research, which is significant for providing historical justice.

“We wish we had more of a budget for it,” said Berry Lifschitz. The museum does have one volunteer who was formerly a member of the museum staff, and is actively looking through various suspected artworks to make sure “they’re kosher.”

“Now, if someone donates to museum, the policy has changed,” said Berry Lifschitz. “We’re very thorough and that’s a big difference. We have a commitment that when we exhibit work, we have to tell the story behind it; that’s our educational commitment.”