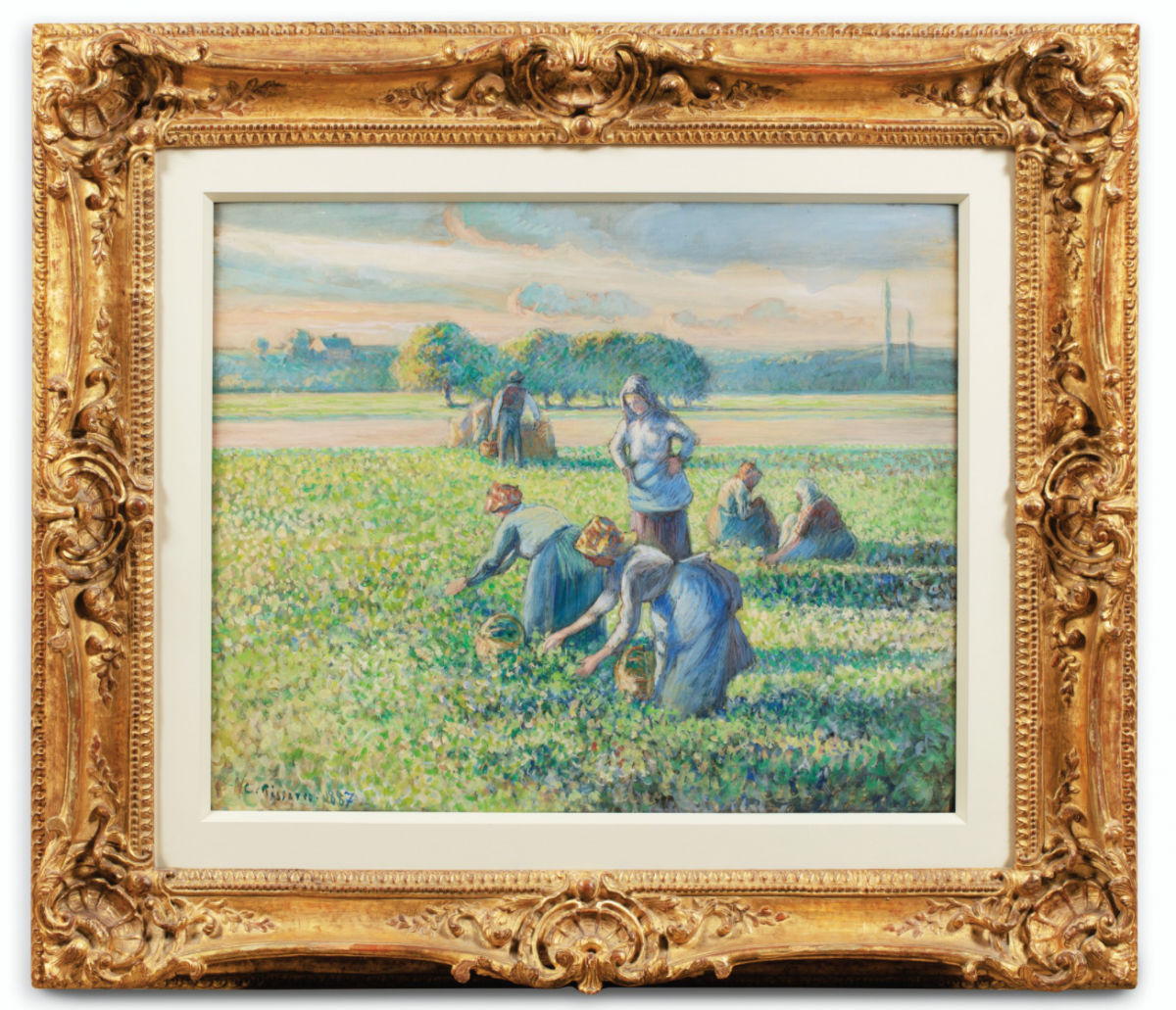 In June 2018, a Paris appeals court ruled that American Philadelphia-based collectors Bruce and Robbi Toll must return an 1887 Camille Pissarro gouache titled La Cueillette des Pois (“Picking Peas”) to the heirs of Simon Bauer, the original French-Jewish owner of the work, from whom the painting was seized during WWII.

Now, three years after the initial ruling that returned the work to the Bauer family estate (which includes some 20 heirs), they are selling the impressionist work, which depicts an idyllic scene of six pea harvesters, during an impressionist and modern auction at Sotheby’s in Paris on March 25. The work is expected to fetch a price of €1.2 million-€1.8 million ($1.4 million-$2.1 million).

Toll, a real estate developer, purchased the piece for $880,000 in 1995 at Christie’s. He loaned La Cueillette des Pois (“Picking Peas”) to the Musée Marmottan in Paris for an exhibition around the artist in 2017. The public showcase led to one of the Bauer heirs filing a lawsuit to have the work returned. The painting was confiscated by the French government where it was placed on temporary escrow.

The decision was met with resistance by the Tolls, who appealed the 2018 decision, but eventually lost the legal dispute in July 2020. The ruling was decided according to a 1945 French law that considers all transactions of looted art made under German occupation void. Upon the decision, Toll’s lawyer, Ron Soffer, announced the collector would appeal the decision before the European Court of Human Rights in order to sue France for the amount of the painting’s value.

Before the Tolls acquired the painting, it was in the hands of New York dealer, David Findlay, who sold it at Sotheby’s London in 1966. Despite the provenance record including Simon Bauer’s entry in Christie’s 1995 sale and the work’s inclusion in multiple museum exhibitions throughout the 2000s across the U.S., the  heirs were not able to successfully claim the work until it resurfaced in France, 87 years after Bauer first acquired it.

Bauer’s collection of 93 paintings, 13 of which were by Pissarro and included others by Sisley, Boudin, Degas and Morisot, were confiscated in 1943 by Vichy regime officials and sold off. After Bauer was freed from the Drancy camp in Seine-Saint-Denis in 1944, he tried to recover the works, but died just 3 years later in 1947. His grandson, Jean-Jacques Bauer, now a nonagenarian, resumed the search for the looted works, represented by attorney Cedric Fischer.

It was not until 1998 that the Washington Conference guidelines were set in place for identifying and restituting art looted during WWII. Sotheby’s founded its restitution department in 1997 and has since liaised in major restitution settlements among art collectors and heirs of original owners. In February 2020, they sold three impressionist works returned to the heirs of French collector Gaston Lévy, one of which included Pissarro’s Gelée blanche, jeune paysanne faisant du feu (1888), for a collective $30.7 million.

Unknown at the time of the Christie’s sale, but later uncovered, the Pissarro gouache’s first owner was Vincent van Gogh’s brother Theo van Gogh, who commissioned it directly from the artist in 1887, offering 300 francs for the piece. In what will be its fourth time at auction, the work will be offered alongside a rediscovered van Gogh landscape of Montmartre that has been unseen for more than a century and is expected to achieve a price of $6 million.