Return of artefacts illustrates beauty in atonement and restoration of justice

April
The Press and Journal 19 February 2021
By Catherine Deveney 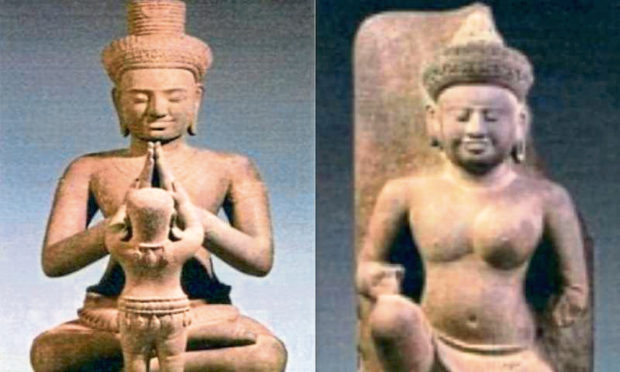 In the 1930 portrait of Martha Liebermann that her husband, Max, painted, there is something quietly indefatigable about her.

She is in her 70s by then, dressed in sober black with her hair in a no-nonsense bun, her direct gaze containing all the serenity of a woman comfortable in her own skin. Interpretation is partly in the eye of the beholder, but when I first saw that image, something in Martha’s eyes, her calmly unflinching expression, made me fancy that there was sadness there, that she was a woman who had known suffering. Or perhaps she just knew it was ahead.

The portrait has been the subject of an ownership battle over the years. Max Liebermann was a renowned artist, president of the Berlin Academy of the Arts, before his death in 1935. When war broke out, his daughter and her family fled to America to escape the Nazis. Martha was to follow but she never got there. In 1943, when bedridden with a stroke, she was notified that she would be taken to the Theresienstadt concentration camp. Hours before she was due to leave, Martha chose, instead, to commit suicide at home. Shortly afterwards, the Liebermann’s famous private art collection was seized by the Gestapo.

The portrait of Martha is not just a painting but a part of history, and it illustrates that ownership is not simply about physical possession, but about moral rights. Like the runner who wins a medal after taking steroids, and secretly knows that their victory is hollow, the caretaker of appropriated art must surely feel – however much they have paid for it – that they are not the true owner. It was certainly that way for Nawapan Kriangasak, a 49-year-old lawyer who, it emerged this month, has returned $50 million of artwork to the Cambodian government.

The collection belonged to her father, Douglas Latchford, and constituted the world’s greatest private collection of artefacts from Cambodia’s 1,000-year-old Khmer Dynasty. As a child, Nawapan learned that running was not allowed in her father’s apartment. The collection included 10th-Century sandstone figures, 11th-Century bronzes, and the brooding statues of Khmer deities that stood in alcoves, some adorned in jewels and golden crowns, that were too valuable to risk accident. But in later life, the accusation was levelled at Latchford that his magnificent collection was the result of decades of trafficking in looted art.

Latchford denied the accusation before his death last year and his daughter says that it should be remembered that he began collecting in a different era. Clearly, selling the artefacts would make her a massively wealthy woman. But Nawapan recognises that creativity has more than a price tag. A political regime can seize paintings. A collector can acquire priceless antiquities on the black market. But there is, without doubt, a moral dimension to ownership. Nawapan illustrates concepts as beautiful as the art itself – atonement for past wrongs; the restoration of justice. True, the art was in her possession. But it was not in her ownership. It was not hers to sell.

Art is not just about artefacts but about the soul of a nation. The response from the Cambodian arts minister, Phoeurng Sackona, is touching. It was, she said, like thinking loved ones were dead in a war – and then having them turn up on the doorstep.

“These are not just rocks and mud and metal. They are the very blood and sweat and earth of our nation.”

It was, she said, “a magical feeling” that they were being returned.

Sadly, the portrait of Martha Liebermann still hangs in a German museum in northern Bavaria. The Georg Schäfer museum in Schweinfurt, Northern Bavaria, was at the centre of controversy last year when its provenance researcher resigned, saying the museum was not serious about restoring artwork with a tainted provenance. It was ignoring the Washington principles which urged the restoration of art looted by the Nazis to its rightful home.

Martha’s great-granddaughter, Katharine, says tragedy like Martha’s gets passed from generation to generation in a family. She, too, feels the burden of her suicide, the weight of history.