‘These families lost everything’: Nazi art theft, an overlooked part of the Holocaust

The Journal sits down with art history professor Cathleen Hoeniger 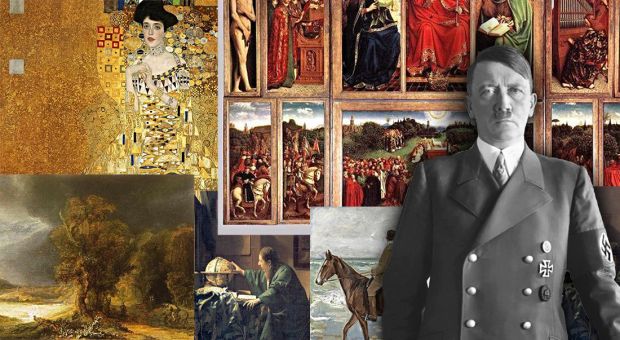 Nazis looted roughly 20 per cent of the art in Europe.

Ginsberg was a vocal opponent of the Vietnam war, but his words recall an earlier tragedy from the same century: The Holocaust.

Most already know about the horrific period during WWII when millions of European Jews were rounded up and killed by the Nazis, but not many are aware of the cultural genocide that immediately preceded it.

During the Third Reich, nearly 20 per cent of the total art in Europe was stolen by the Nazis, much of it originally belonging to Jewish families. This attack on art and culture was alluded to in Mein Kampf and began shortly after Hitler became chancellor of Germany in January 1933.

In an interview with The Journal, Cathleen Hoeniger, a professor of Art History at Queen’s, discussed this turbulent period in history.

“[Hitler] started this this whole historic rewriting where he believed that the Romans had not inhabited the German lands in the ancient world,” she said. “But rather, there was this ancient German Aryan race, and they were responsible for great classical art and sculpture,” Hoeniger said.

“He wanted a return to family values, a kind of bucolic art—a family sitting around the fire in a cottage realistically depicted or classical style art. He loved ancient heroic art like sculptural figures in battle.”

In Mein Kampf, Hitler argued the modern art movement was a feature of the gross excess of the 1920s and a product of Jewish Bolshevism, which he saw as a threat to German culture and prosperity.

“He didn’t loathe or strongly hate all modern art,” Hoeniger said. “[He hated] abstraction, and particularly the types of abstraction that developed in reaction to the horrors of WWI.”

After the first World War, an art movement developed around a new style called dadaism—a radical left-wing, anti-war, abstraction movement that was against realism and depicted psychological trauma through warped characters and portraits.

“Hitler loathed that kind of art because it was against the idea he had for the German race, the pure German race as being a race of strong warrior people. He hated the reaction against WWI. There were even certain German artists who fought in WWI in the trenches who were purged by Hitler and his henchmen,” Hoeniger said.

Modern artworks were seized from German state museums and held at “Degenerate Art Exhibitions” to be gawked at—the most famous of these exhibitions occurred in Munich in 1937.

“It was held in a really dark and dreary location: the second floor of the Archeological Institute in Munich. They deliberately curated it so that it would look dreary and chaotic, so that it wouldn’t show the works of art in a positive light but make it look dark and degraded and dirty,” she said.

The rooms housing the art had obscene labels on the walls like “Revelation of the Jewish racial soul” or “The Jewish longing for the wilderness reveals itself.”

Around two million people visited the exhibition in Munich because it was free and Hitler highly encouraged people to go. Then, it traveled to 11 different cities in Germany and in Austria, closing only when the World War began in May of 1939.

The artists responsible for these pieces had their life’s work stolen; they were fired from teaching positions, and banned from selling, exhibiting, or producing art ever again. Eventually, they were taken to concentration camps.

“One was Otto Freundlich,” Hoeniger said. Otto was an abstract painter and WWI veteran.

“One of his works was actually on the cover of the exhibition catalogue for the Degenerate Art Exhibition […] He was 64 when he was taken to a Nazi concentration camp and he was killed the day he arrived.”

Some scholars, including Hoeniger, recognize this purging of art as an identicideor cultural genocide forecasting worse things to come.

In 1933, shortly after Hitler came to power, the book burnings started. Novels by famous Jewish authors were taken out of university libraries—sometimes by the students themselves—and thousands were disintegrated. It wasn’t long before modern art was added to the blacklist and what wasn’t exhibited or auctioned was also burned.

As the Nazis began occupying other parts of Europe, roughly 600,000 Jewish-owned paintings were stolen. Hitler got first say over what would happen to the art—whether it would be kept, sold, or destroyed.

“Hitler himself took about 100 pieces that had been collected together as degenerate art into his collection.”

As Hitler looted all over Europe, he began collecting for the Führermuseum, an art gallery planned for construction in Linz, Austria that never came to fruition. Hitler was bitter about his rejection from Vienna’s Academy of Fine Arts and wanted the Linz museum to overshadow Vienna as the finest art hub in Europe.

Hoeniger noted that Hitler’s plan for Linz was closely modeled off Napoleon.

“Napoleon won every war against every Italian state and […] as part of the payment for piece, [he said] you have to give me these works of art. It made the looting quasi-legal. Those works of art went into the new Louvre which was called the Musée Napoleon.”

“The Third Reich with Hitler was a new iteration of that whole idea that you loot art from all of your territories as he invaded all over Europe, and then you put it into this grand new museum that becomes the international museum, the biggest most glorious museum.”

Sadly, many works stolen by the Nazis have not been returned to their rightful heirs and even have tremendous value to art collectors because of their status as Nazi loot—a Van Gogh piece stolen by Herman Goring is one example.

“It eventually ended up in New York city and it went up for auction in 1990,” Hoeniger said. “It was sold to a Japanese collector and the price that it reached was the highest price ever for a painting sold at auction: $82.5 million.”

According to Hoeniger, some countries like Germany are now recognizing the need for restitution—the need to return stolen heirlooms to the original families. But others, like Italy, which also possess stolen works from WWII, have done nothing.

“There’s a whole sequence of benefiting [from the theft]. It’s more like, who lost? Those Jewish families. They were killed. Then, the young ones who managed to escape, the children, the grandchildren—often the settlements come up now or in the past 20 years. They’re trying to get back some of the heritage that was lost.”

Hoeniger explained that most of the time these cases settle out of court and the family gets pennies compared to the true value of the art.

“These families lost everything because it wasn’t just their art. They lost their homes, their estates, every piece of furniture.  When the Nazis invaded France, in Paris alone, they estimate that 70,000 homes were completely vacuumed out.”

Hoeniger shared a personal attachment to the story. Her father survived the Holocaust and emigrated to Canada where he was eventually sponsored by a Classics professor at the University of Toronto, who offered to pay for his degree if he worked on his farm each summer.

“He had spent two years at an internment camp in Canada because they mistook them for prisoners of war,” she said. “I remember him saying, ‘Well, I couldn’t even take someone out on a date because I couldn’t buy them a beer.’ They started in new countries with nothing.”