The Netherlands must carry out more structural research into art acquired via the Nazis from their original Jewish owners, the Dutch Council for Culture says in a new report. 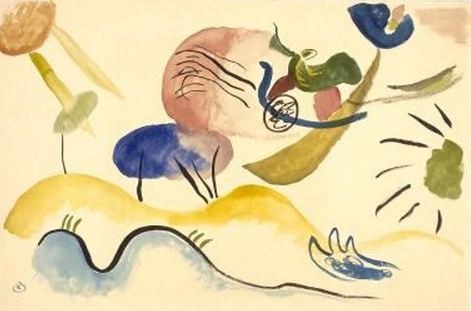 Watercolor No. 2 by Wassily Kandinsky is on the list of possibly stolen art

In addition, the interests of the museums should no longer be taken into account when ownership claims are being assessed, the council says in the review, which was commissioned last year following a string of complaints.

Requests for restitution are currently made to the national Restitution Committee but it, the council says, has an unclear framework to operate in because its remit has been put together piecemeal over the years.

The council says a new ‘unambiguous assessment framework’ is needed, which should be clearly based on the Washington Principles, which the Netherlands signed in 1998.

These principles state that the Netherlands has undertaken to actively trace the original owners or their relatives, a process which, the council says, has now been made easier thanks to new technology and new sources of information.

The Netherlands stopped carrying out research into stolen art in 2007, which is in contravention of international principles, the council says.

The Restitution Committee said on Monday it expects a new framework will make the appraisal of restitution applications more transparent. ‘

The RC will use its best efforts to adapt its working practices so that they are perceived as being less remote,’ the statement said. ‘This will include intensifying communication with applicants and formulating recommendations and decisions in a more understandable way’.

During the Nazi regime, an enormous number of cultural objects, including paintings and sculptures, were stolen from Jews and other persecuted groups in the Netherlands. After World War II, some was returned by the Allies to the Netherlands but many other objects remain in museum hands.