Is Saving Art Worth Lives?

When we think of the heroes in World War II, we usually think of individuals who saved others’ lives. But what about the heroes who risked their lives to save culture? 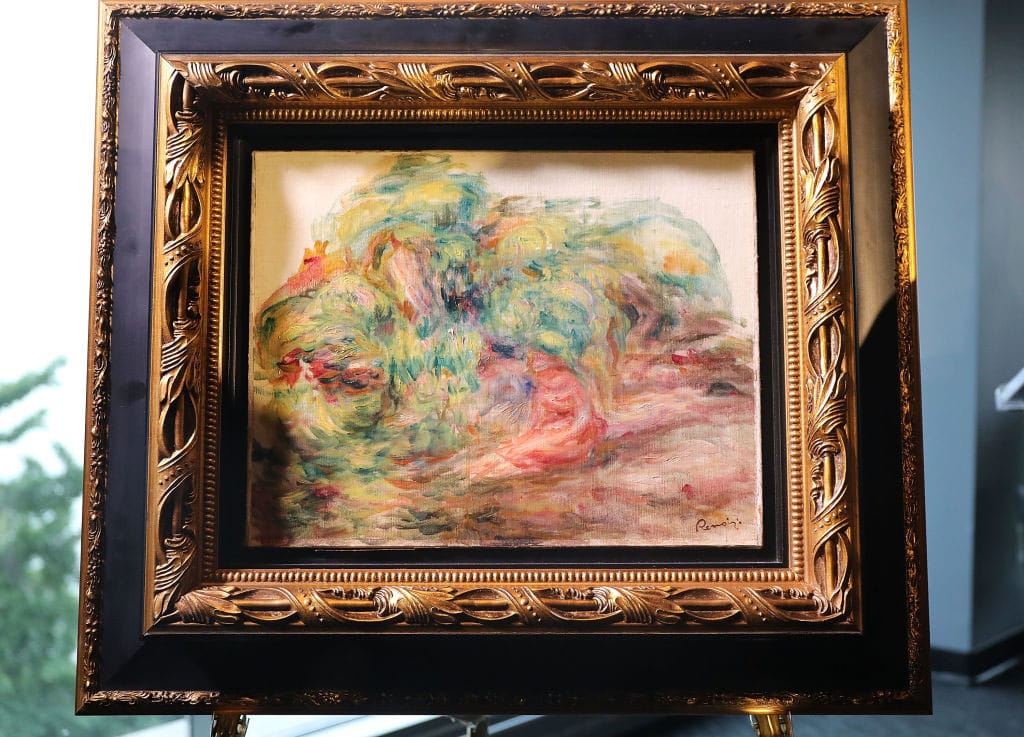 The recovered Impressionist painting "Two Women in a Garden," painted in 1919 by Pierre-Auguste Renoir is displayed at a news conference on September 12, 2018 in New York City. The work of art originally belonged to Sylvie Sulitzer's grandfather Alfred Weinberger and was stolen by the Nazis in Paris during the World War II.

More than 20% of the art in Europe was looted by the Nazis during World War II, including 600,000 paintings belonging to Jewish owners. At least 100,000 works of art are still missing today. The Nazis’ goal was to destroy the history of cultures that they deemed inferior and make sure there was no trace left from them. They burned and destroyed many Surrealist, Expressionist, and Cubist pieces (which they categorized as degenerate), sold works such as Impressionist pieces in order to buy other pieces they liked, and kept all the pieces pleasing to Hitler to be exhibited in his Linz collection.

In June 1943, at the request of General Eisenhower, the Civil Affairs and Military Government Sections of the Allied Armies formed the Monuments, Fine Arts, and Archives (MFAA) section. A group of men and women from thirteen nations, who came to be known as the Monuments Men, volunteered to be part of the MFAA. Many were architects, museum directors, librarians, artists, and educators. “Their job description was simple: to save as much of the culture of Europe as they could during combat,” Robert M. Edsel describes in his book “The Monuments Men” (which was the basis of the 2014 movie of the same name). The Monuments Men considered all art to be equally significant and worth saving for preservation of culture. George Stout, an art conservator and one of the Monuments Men, stated, “Our job isn’t to judge; our job is to save the art.”

On a hot Friday afternoon this summer, I had the honor to interview both the last surviving Monuments Man, Richard M. Barancik, and Ruth Adler Schnee, a Holocaust survivor with a lifelong passion for art. I spent much of my quarantine summer researching the MFAA, so I jumped at the chance to hear the firsthand account of these older figures, and glean the significance of the MFAA section in their eyes. 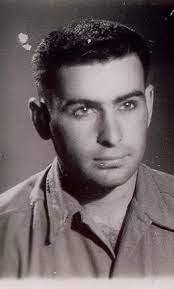 The last surviving member of the Monuments Men, Richard M. Barancik was born in Chicago, Illinois and in December 1942, at the age of 17, enlisted in the Army Enlisted Reserve Corps,, against his father’s will. He joined a special training program and studied basic engineering as a cadet in 1943 at the University of Nebraska.

Richard’s first combat experience was during the Battle of the Bulge. On Christmas Eve, as part of the 66th Infantry Division, he crossed the English Channel to France, and he witnessed part of his unit torpedoed by enemy submarines. He recalled seeing bodies washing up upon the beach from the S.S. Leopoldville. “It was a terrible tragedy that occurred through a screwup of the British, Belgians and Americans. It was described for many years as the best kept secret of the Second World War, to avoid embarrassment.” Approximately 800 men lost their lives in that tragedy.

After the war ended, Richard was sent to Bagdestein, Austria, where the 66thDivision prepared the town’s hotels for the arrival of camp survivors. While in Badgestein, he noticed on a bulletin board that the Army was looking for men with an art background to join the MFAA. He applied for duty and was selected. For three months, Richard served as a guard and assisted in moving stolen art to the Wiesbaden Central Collecting Point. “The art was wonderful,” Richard said, unlike anything he’d ever seen.

After the war, Richard studied architecture at Cambridge University in England and the Ecole des Beaux Arts at Fontainebleau in France and became a successful architect with his own firm in Chicago. 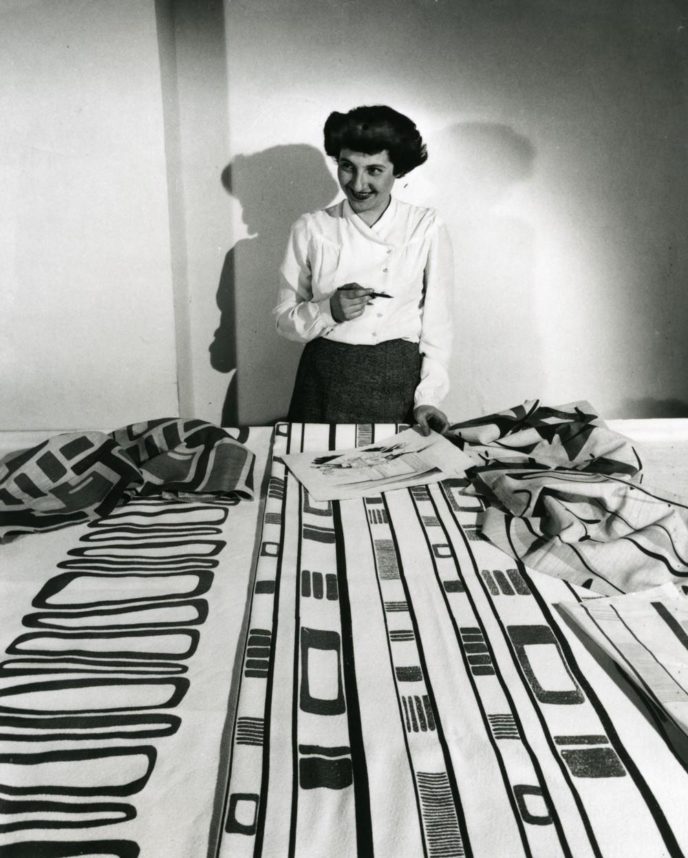 A textile designer and interior designer, Ruth Adler Schnee is familiar with another side of Richard’s story — those who had art stolen from them. Ruth attended  the Degenerate Art Exhibition in Düsseldorf in t 1938. The teenager was in awe of the exhibit, which included examples of  Impressionism, Dadaism, Cubism, Surrealism and Expressionism, displayed by the Nazis as examples of art that degraded German culture.

At the time, Ruth was friends with the family of Adele Bloch-Bauer’. Adele was most famously known as the model in the painting “Woman in Gold” by Gustav Klimt, stolen by the Nazis in 1941. Ruth would often go to Adele’s house to play with her niece and see the painting in their living roomwas. She was also close family friends with the modern artist Paul Klee. As a child, Ruth went to Klee’s apartment, which was right below hers, and playing with the colorful shapes that he had designed. Ruth’s family, who had been in the publishing and rare book business for 500 years, lost everything. Her mother’s modern art collection was stolen and destroyed by the Nazis. Ruth remembered dreaming with her family about life in a peaceful place.

Ruth and her family endured the insufferable persecution of the Jewish people in Germany. Her father was imprisoned at Dachau but, miraculously, her mother was able to free him. Though it was difficult, her family acquired the necessary papers to leave Germany and immigrate to the United States, where they re-established their lives in Detroit. Ruth continued her studies and was granted a full scholarship to the Rhode Island School of Design for fashion. “Design was my passion,” she said. After the war, Ruth became one of the founding figures of textile design in the United States.

Her family’s art and treasures were never retrieved.

The Legacy of the Monuments Men

The Monuments Men rescued five million stolen art pieces and artifacts and restored them to their rightful owners whenever possible. However, tens of thousands of looted pieces are still missing today. In December 1998, forty-four countries agreed  to the Washington Principles on Nazi-Confiscated Art, and set a goal to identify, locate, and restore all looted artwork. During the last twenty years, many museums and art galleries have begun researching paintings that had passed through Europe and had suspicious origins or ownership roots. Almost 30,000 stolen works have been posted and identified on a collaborative portal since then. France, Germany, Austria, the Netherlands, and Britain created advisory commissions and have returned thousands of looted art and personal belongings.

In 2009, forty-six countries extended the Washington Principles by signing on to the Terezin Declaration. This Declaration included a wider range of institutions beyond museums and art galleries, and extended the definition of confiscated art to include art that was sold by Jewish families who were trying to flee Nazi Germany and needed the money to do so. Unfortunately, many other European nations, including Russia, have not cooperated with or supported any of these declarations, and still have many stolen pieces on display in public and private museums, and traded in markets.

Is Art Worth Lives?

Often, people think art is meant to be displayed in museums and shown to the public only for the sake of its visual appeal. However, Richard Barancik and Ruth Adler Schnee demonstrate that art is a representation of our history, our culture, and our past.

The Nazis understood this power, and tried to demolish the memory of certain civilizations by taking away their art. It is important that we remember their unjust actions and never forget those who helped preserve our history.

At the end of the movie “The Monuments Men,” the captain of the MFAA section is asked the poignant question: “Is saving art worth lives?” I ended both of my interviews with this same question. Ruth enthusiastically said “absolutely!” But Richard gave me an unexpected answer: “If I were [one of] the ones that died, I would say no. The art that was saved was wonderful, and the Monuments Men did wonderful things, but it’s not worth someone’s life.” Their contrasting responses likely stem from their very different lives. For Ruth, art and artifacts were a testament of her family’s existence and her heritage. But Richard was a soldier, who witnessed the horrors and damages to human life that the war caused with his own eyes.

I once would have agreed with Richard if I was asked this question. But after doing each interview, I couldn’t help but think of the MFAA soldiers that were killed for the sake of art during the war. Their deaths conveyed a powerful message: Saving art is worth a human life because it means saving our ability to document our history, maintain our identity, and preserve our culture through time. Art provides a personal and emotional perspective on history that allows us to understand others’ experiences as humans. In an age in which technology can be manipulative and any version of history spread online, art is like a primary source that serves as proof of the humanity of others across time and cultures. What is more valuable than that?

Amalia Abecassis is a tenth-grade student at Shalhevet High School.