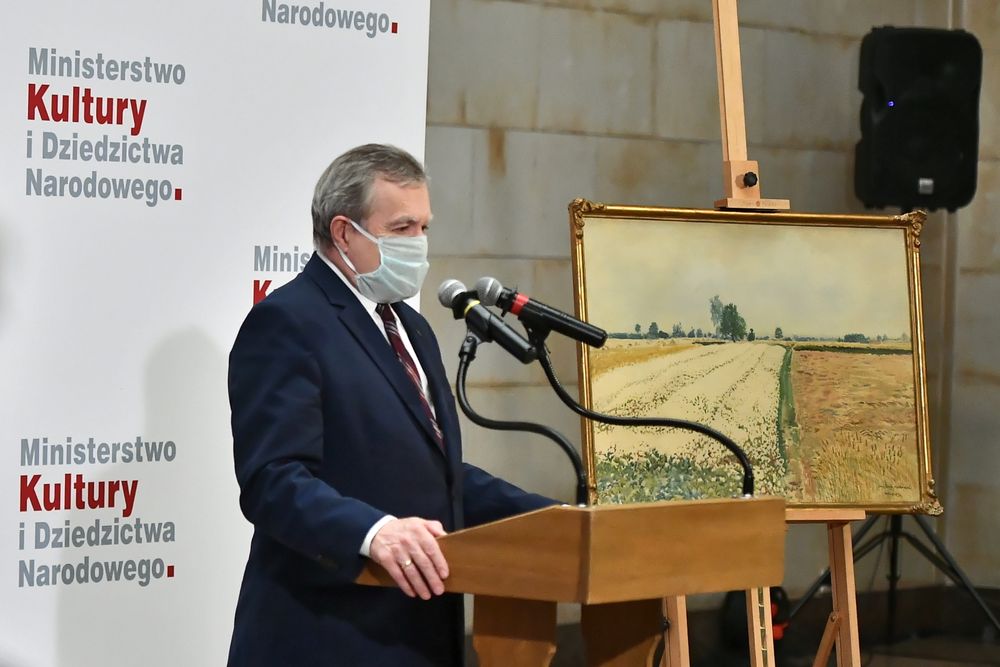 'Buckwheat,' a watercolour painting by Stanislaw Maslowski lost during World War Two, has been restored and handed over to the National Museum in Warsaw by Deputy PM and Culture Minister Piotr Glinski on Tuesday.

Glinski, while presenting the painting, said that it had been lost twice. First, during World War Two, because it was stored in German storehouses in Lower Silesia. However, it was later restored by the National Museum. "Then it was borrowed by the Polish-Russian Friendship Association, and our 'comrades' simply stole this beautiful watercolour painting by Stanislaw Maslowski along with 33 other works of art," the culture minister said.

He stated that when the painting went to auction, it was recognised as a looted work of art by Polish Culture Ministry experts. He added that, after becoming aware of the painting's history, its current owner immediately returned it.

Stanislaw Maslowski (1853-1926) was a Polish Realism painter and author of watercolour landscapes. "Buckwheat" was painted in 1924.

Glinski stated that Polish works of art, lost during World War Two, had been gradually returning to Poland. "They have been returning, but we want more of them to come back." According to estimates, Poland lost around half-a-million works of art, mainly during World War Two. Over 60,000 of them have been identified and included in the Register of Looted Art of the Ministry of Culture and National Heritage. Poland has been gathering data on looted and lost artwork since the early 1990s.

Over recent years many paintings from the Polish collection stolen during World War Two have returned to Poland. They include, among other works, drawings by Ignacy Lopienski and Alfred Schouppe, "The Jewish Woman with Oranges" by Aleksander Gierymski, "The Black Woman", a 19th-century painting by Anna Bilinska-Bohdanowiczowa, "Off to the Hunt" and "The Hunt" by Julian Falat, "Saint Philip Baptizing the Servant of Queen Candace" by Johann Conrad Seekatz, the 18th-century "Portrait of a Young Man" by Krzysztof Lubieniecki, "Paesaggio marino con pastori e armenti" (sea landscape with shepherds) by Pieter Mulier and "Portrait of a Lady" by Aimee Zoe Lizinki de Mirbel.