Jewish family’s painting looted by Nazis in 1933 is returned 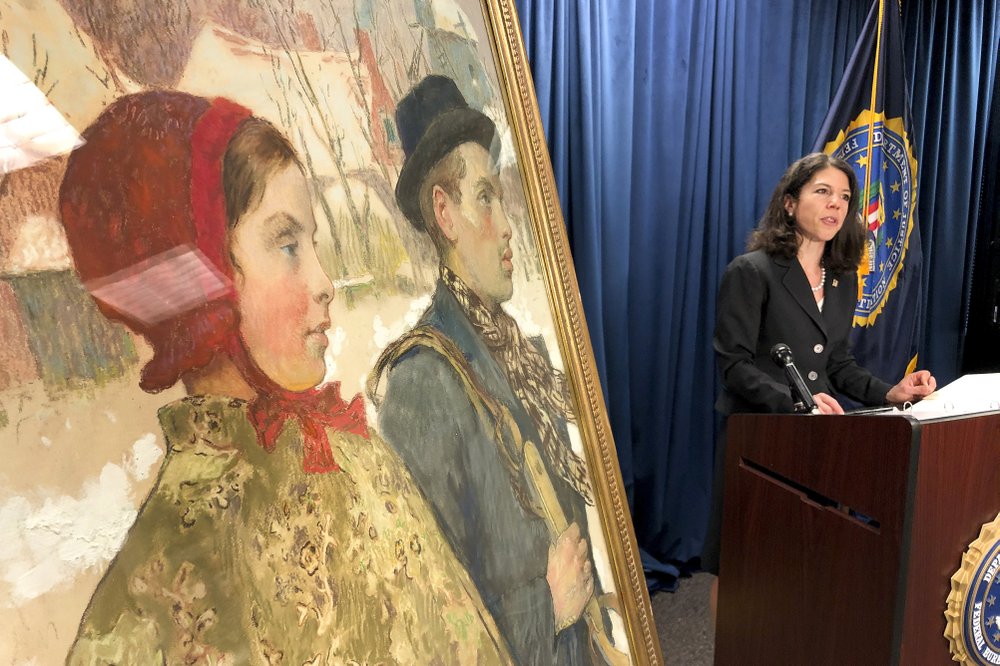 Acting U.S Attorney for the Northern District of New York, Antoinette T. Bacon, speaks at a repatriation ceremony for the painting "Winter" Thursday, Oct. 15, 2020, in Albany, N.Y. The painting, discovered in an upstate New York museum, was part of a cache of art seized by the Nazis from the Mosse family in Berlin in 1933.

ALBANY, N.Y. (AP) — A painting of two young, 19th-century skaters that was looted by Nazis from a Jewish family in 1933 and recently discovered at a small museum in upstate New York was returned Thursday after 87 years.

The painting “Winter” by American artist Gari Melchers was part of a cache of more than 1,000 pieces of art and artifacts seized from the Mosse family, prominent and well-off Jewish residents of Berlin who became early targets of the Nazi Party. Heirs have been tenaciously seeking to recover the lost pieces for the past decade.

“The Mosse family lost nearly everything because they were Jews. But they did not lose hope,” acting U.S Attorney for the Northern District of New York Antoinette Bacon said at a repatriation ceremony at the Albany FBI office. “While this certainly does not take away the pain the that the Mosses endured, I hope it provides the family with some measure of justice.”

The Mosse Art Restitution Project was started in 2011 to locate and restitute the stolen artworks on behalf of the Mosse heirs. They have completed three dozen restitutions covering more than 50 items from public and private museums as well as private individuals in Germany, Austria, Switzerland, Israel and the United States.

The road to this restitution started after the Arkell Museum in Canajoharie, New York, noted its seasonal closing in January 2017 with a friendly Facebook post urging readers to “Enjoy Winter!” It was illustrated with a picture of “Winter.”

The post was noticed by a student working with Dr. Meike Hoffmann of the Free University of Berlin. Hoffmann heads the Mosse Art Research Initiative, a university-based collaboration involving Mosse heirs and German public cultural institutions.

Hoffmann said in an email that provenance researchers at MARI were able to link the painting to the Mosse family with the help of Arkell Museum executive director Suzan Friedlander.

“Winter,” sometimes known as “Skaters” or “Snow,” was purchased in 1900 by publishing magnate Rudolf Mosse, who displayed it in a grand Berlin residence loaded with fine art.

Mosse died in 1920 and his daughter Felicia Lachmann-Mosse was his heir. She and her husband Hans Lachmann-Mosse ran the newspaper Berliner Tageblatt, a critical voice during the Nazi Party’s rise to power. As high-profile symbols of the “Jewish press,” the couple was persecuted and fled Germany in 1933. The Nazis seized the family’s assets, including the artwork.

Mosse died in 1920 and his daughter Felicia Lachmann-Mosse was his heir. She and her husband Hans Lachmann-Mosse ran the newspaper Berliner Tageblatt, a critical voice during the Nazi Party’s rise to power. As high-profile symbols of the “Jewish press,” the couple was persecuted and fled Germany in 1933. The Nazis seized the family’s assets, including the artwork.

“It was one of the first large expropriations undertaken by the Nazis, a template for what became, unfortunately, a well-oiled machine,” said Roger Strauch, president of the Mosse Foundation and the step-great-grandson of Rudolf Mosse. He participated in the ceremony by video link.

“Winter” was sold at auction in May 1934 to an unknown buyer. Five months later, it was in a New York City gallery, where it caught the eye of Bartlett Arkell, a wealthy collector and president of the company that became Beech-Nut Packing Co. in Canajoharie.

Arkell shipped the painting to upstate New York, where it became part of the collection of the museum near the Mohawk River that bears his name.

There’s no evidence Arkell was aware of the painting’s dark history, Bacon said.

Friedlander said at the ceremony that the museum takes it responsibility to make things right seriously.

Federal authorities were contacted as Mosse Art Restitution Project manager J. Eric Bartko was working to get the painting returned from the museum. FBI agents recovered the painting in September 2019. The formal handover to the family was delayed by the pandemic.

Strauch said the painting is expected to be auctioned through Sotheby’s, where it could attract bids in the hundreds of thousands of dollars. Most recovered artworks have been sold back to the previous holders or sold at auction, he said.

“This battle will never be over,” Bartko said recently. “This is a highly visible way to remind people that these crimes took place in the past and they are still being redressed now.”