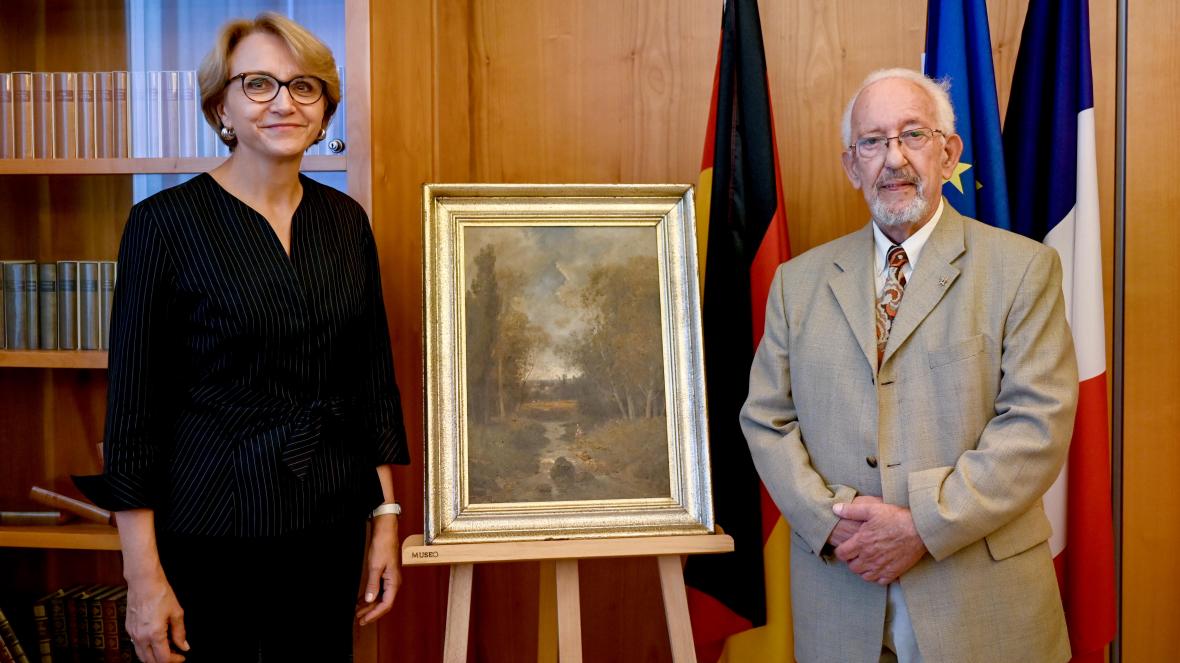 The Rousseau painting was returned last year by Peter Forner, the son of the man who stole it in 1944

A 19th-century oil painting has gone on show in Verdun in the hope of tracing its rightful owners after it was returned by the son of the wartime German serviceman who stole it in France.

The small bucolic scene by Nicolas Rousseau, a member of the Barbizon school, was handed over in a ceremony at the French embassy in Berlin to the World Peace Centre at Verdun, a memorial at the site of the longest battle during the First World War.

Officials voiced their gratitude to Peter Forner, the late son of a non-commissioned officer in the Luftwaffe who took the painting from an unidentified site near the Normandy coast, where he was stationed when the Germans retreated in 1944.

Mr Forner’s father claimed that he took it on the orders of an officer he was later unable to trace. Mr Forner, a supporter of European unity, gave it to the French embassy last year, saying that he had grown up with it on a wall in the family home and wanted it returned to France to clear his conscience.

The public display of the picture, which is estimated to be worth €3,000, is part of a campaign by President Macron to speed up efforts to track artworks that were pillaged, mainly from French Jews, by the Nazis and their French collaborators during the occupation. Thousands of items traded on the Paris art market from 1940-44 have yet to be returned to their owners’ heirs.

Julien Acquatella, the Berlin representative of the French state commission for the compensation of pillaged families, said that a detailed investigation would be carried out to trace the family that owned the painting since there was no trace of it in museum records.

“We are trying to repair an injustice. These looted objects have an extremely high value,” he told Le Figaro newspaper. “They all have a lot of things to tell us. We are trying to reconstruct the movements of the serviceman Forner . . . and the records offices are searching for descendants of the painter to find out who could have inherited the work.” French efforts to find owners of Nazi-looted paintings have included a show at the Louvre three years ago.

In June France’s highest court ordered the return of a painting by Camille Pissarro to the family that lost it during the occupation.

The Court of Cassation’s decision ended a three-year legal battle over La Cueillette des Pois (The Pea Harvest), painted in 1887. It set a precedent by upholding a 1945 French law annulling ownership of art stolen from Jewish owners during the occupation.