As Adolf Hitler's art 'buyer,' Hans Posse lived the high life, traveling Europe to acquire looted art for a "Führer Museum" in Austria. Diaries of his journeys have now become an online collection themselves. 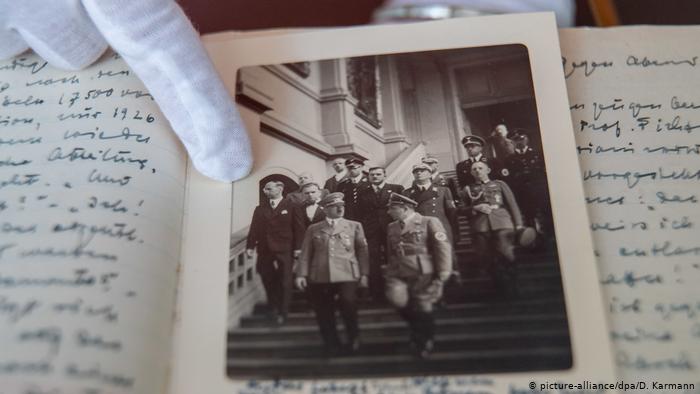 He sometimes wrote fleeting notes in pencil; other times his travel diary entries were made with a blue fountain pen and included acronyms of important people or sketches of old master paintings he'd examined. From July 1939, the Dresden museum director Hans Posse (far left above) was on a secret mission as Hitler's personally-appointed special representative for a planned Führer Museum in Linz, Austria.

Hitler dreamed of going down in history as a great patron of the arts, and Posse was charged with making the dream reality. For three years until the autumn of 1942, he kept meticulous records in his notebooks and diaries. Five of these travel diaries and one service diary were evaluated over a period of three years for a research project at the German National Museum in Berlin.

Now available to be explored online, the diaries are a vital primary source in understanding how the Nazis looted so much art, a phenomenon that gained notoriety following the Gurlitt case in 2013.

On July 5, 1939, Hans Posse started his first inspection tour. He traveled to Munich and selected the first paintings from the "Führerbau," which initially served as a depot for looted art. Days later he traveled to Linz in Austria, Adolf Hitler's hometown. There Posse was to meet with local officials to consult on the building of an art museum to be filled partly with stolen masterworks. (But like Hitler's fabled city of Germania, his museum was never built.)

Hitler's Reich Chancellery telegraphed in advance that Posse should be actively supported. "Hitler had given him enormous powers," says Susanna Brogi, the director of the German Art Archive in Nuremberg, where the secret travel diaries have been stored and evaluated.

On July 10, 1939, Posse's journey continued to Vienna. There he visited the Austrian central depot of artworks already confiscated from Jewish art collections. Immediately after the March 1938 "Anschluss" in which Germany annexed Austria, thousands of paintings were quickly seized following a general ban on Jewish art dealers and gallery owners. With many fleeing abroad, their holdings were ruthlessly liquidated and "Aryanized."

"Over 8000 pieces," Hans Posse noted in his diary on July 10 with his barely legible scrawl, referring to the Nazi stolen art.Nazi financial authorities alone auctioned off 16,558 works of art seized in Austria. Chief buyer Posse also profited from this. But he also bought from non-Jewish art holdings in the European art trade.

Posse's diligent bookkeeping in the notebooks means they are full of important evidence. Posse settled everything meticulously with the Reich Chancellery in Berlin: train rides, invitations from business partners, admission tickets to the "Great Art Exhibition" in Munich's Haus der Kunst. Even tips.

Expensive leather gloves, pralines or his beloved cigars were his private pleasure, paid for out of his own pocket. Martin Bormann, Hitler's personal secretary, had already paid him 10,000 Reichsmarks in advance for travel expenses.

Posse's own ambitions to become a painter were quickly put on hold when he studied art history in Vienna and realized the limits of his own talent – a biographical parallel he shares with failed painter Adolf Hitler.

Having trained under Wilhelm von Bode, the esteemed director of the Kaiser Friedrich Museum in Berlin, the 31-year-old Posse was appointed director of Dresden's Staatliche Gemäldegalerie (Dresden State Gallery) in 1910. Quickly making a name for himself, he ambitiously expanded the museum's collection while promoting emerging modernist and Expressionist painters like Oskar Kokoschka.

In 1922, as the commissioner for the German Pavilion at the Venice Biennale, Posse decided to feature Kokoschka's work — despite growing criticism from conservative and nationalistic sectors of the German art world.

In the face of massive hostility from the local Nazi Party, Posse continued his cosmopolitan focus and exhibited many works that the Nazis later defamed as "degenerate art." Ultimately, however, he was forced into retirement in March 1938. 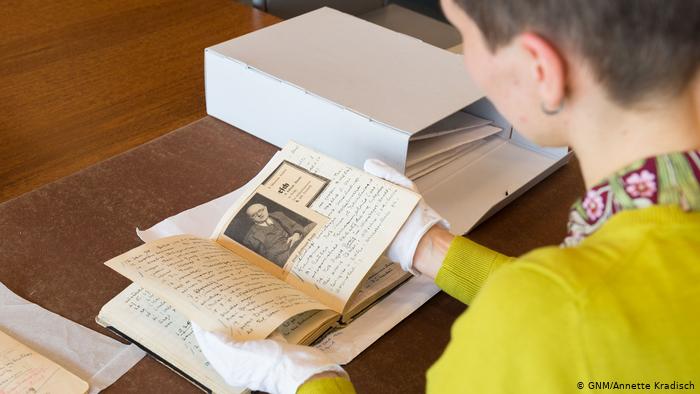 With this background, it might seem unlikely that Hitler would choose Posse as his emissary for acquisitions of the planned Führer Museum. Yet for three years from 1939, Posse traveled through the Nazi-occupied countries as chief buyer for the "Special Order Linz."

According to his instructions, premium paintings, valuable sculptures and porcelain collections were to be transferred to the Linz museum inventory under a "Führer allocation," explains Birgit Schwarz, an art historian on the research team looking into Posse's notebooks.

Art treasures worth millions were stored in the Central Depot in Vienna alone, stolen or confiscated from Jewish families with names such as Rothschild, Gutmann, Pollak, Goldmann and Wolf.

On Hitler's behalf, Posse traveled on to Venice, Florence, Paris, Warsaw and Krakow, primarily to buy up historical paintings for Linz worth millions: masterpieces by Titian, Raphael, Canaletto, Rubens, Rembrandt and Van Dyk.

After the end of the war in May 1945, Allied troops secured much of the art booty that was stashed in a salt mine in Altaussee near Salzburg. It was then taken to the "Central Collecting Point" in Munich.

A willing executor of Hitler's wishes

With Posse having documented this vast criminal enterprise in minute detail in his travel diaries, these documents have become key to understanding the machinations of Nazi art theft. "The edition shows how Posse, in Hitler's eyes the best museum man in Germany, became the central manager of Hitler's museum policy," Schwarz told DW.

After Hans Posse died of cancer in 1942, his estate was lost. But his private travel diaries surfaced by chance in the 1980s, notes Susanna Brogi of the German Art Archive.

In Brogi's opinion, Hans Posse was a willing executor of Hitler's wishes: "Building up a large collection ... and having access to everything you wanted to buy for it, that has a great appeal," she notes. "Perhaps the most shocking thing is the lack of emotion when we look at these documents, how dates, names, places and works are strung together."

This cold retelling of one of the world's most systematic heists is now digitalized and publicly available online. While an important historical source for art historians and provenance researchers, Posse's notes also expose the greed of museum directors under the Nazis to exploit the opportunity to build up their collections.