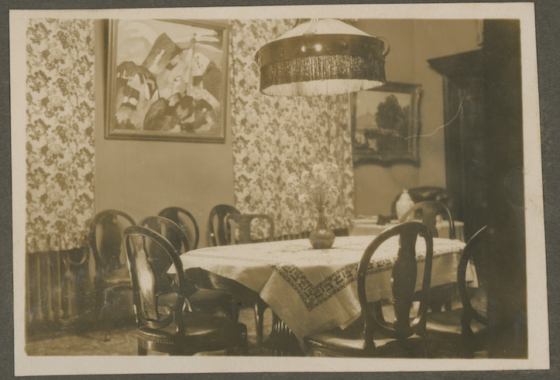 The painting in situ around 1935

A Jewish family has complained to the Dutch culture minister about the ‘careless’ mistakes and a lack of empathy in a committee judging on whether they lost a Kandinsky masterpiece due to pressure from the Nazi regime.

‘View of Murnau with church’, which belonged to the Stern-Lippmann family in Germany before World War II, has ended up in the collection of Eindhoven city council, in the Van Abbemuseum.

But 12 descendants of the former owner Johanna Margarete Stern-Lippmann claim it disappeared under dubious circumstances, when their Jewish ancestor fled to the Netherlands and the painting vanished from the family collection. She herself was eventually arrested, deported to Auschwitz and murdered.

Hester Bergen, who has been leading the family effort to reclaim the painting, told DutchNews.nl that the family was frustrated with long delays, intrusive questions, and ‘factual mistakes’ in expert reports commissioned by the Dutch restitutions committee.

Their criticisms are the latest in a series of complaints about the committee, which is tasked with issuing ‘binding opinions’ on whether art was looted during World War II, and whether public museums should return it.

The Dutch government has launched a review of the ‘legal and moral aspects of Dutch restitution policy’ on Nazi looted art, due to report in October – especially looking at how Dutch policy relates to international guidelines and reflects ‘the suffering of victims and the dialogue with heirs.’

Bergen first became aware that the Kandinsky could have been a painting lost by her family when the Van Abbemuseum itself identified it as potentially looted art, with a suspect provenance seven years ago.

She found a mention of a Landschaft by Kandinsky in a 1924 family will – and the museum found this matched a handwritten description on the back of the painting. Then, in the possessions of her 84-year-old aunt, Bergen found a photograph of the work on the walls of her great-grandmother’s house in Germany, dated up to 1935.

'That was the signal for the museum to say, this can’t be nothing, in 2015,’ Bergen told DutchNews.nl. ‘What bothers me is that I had a very good contact with the museum and actually the museum was willing to give a farewell party and give it back to the family.

‘In the meantime my old aunt is the only one still alive who survived the war in hiding. My mother died five years ago, my other aunt died last May, but they keep on delaying the whole case. My aunt is a direct victim of the war. That’s what bothers me.’

An initial claim was rejected by the Dutch restitutions committee in 2018: it did not doubt evidence that the family had owned the painting, but said they had not proven how it ended up in the hands of The Hague art dealer Karl Alexander Legat. This man – whose name appears on a list of red flag names for dealing in looted art – sold the piece to the museum in 1951, claiming the former owner was a mysterious ‘A. Kaufmann.’

The family submitted more evidence to the restitutions committee last February, and was this year asked to pose more questions to Bergen’s aunt. ‘The more questions I had to ask, the more my aunt got angrier and angrier,’ says Bergen. ‘She said this has nothing to do with the painting and that was a signal for us to say this is ridiculous.’

Now the family has written to the Dutch culture minister Ingrid van Engelshoven complaining about factual inaccuracies in expert reports, the length of time taken for judgements, potential ‘bias’, and whether due ‘care and respect’ is shown for ‘people traumatised by losing family members in the Holocaust’ by the restitutions committee.

A spokesman for the culture ministry told DutchNews.nl that it believes claimants are treated ‘respectfully and carefully’ but said: ‘The ministry regrets if there are claimants who are not happy with the restitution procedure.’ A spokeswoman for Eindhoven city council said it was waiting for the committee’s latest ruling, adding: ‘We understand that the family feels that the process is slow, but it is important that everything is carefully examined.’

This is not the only recent controversy for the committee – which, unusually, takes into consideration the interests of modern day museums when deciding whether or not to return work. In another case over a separate Kandinsky painting, one family is taking the Stedelijk museum in Amsterdam to court over its refusal to return a painting that belongs to the family, accusing restitutions committee members of ‘bias’.

However, critical feedback is welcome in the current review, according to a spokesman for the Dutch Arts Council, the Raad van Cultuur. ‘We are inviting everybody to discuss with us their vision on the return of looted art policies in the Netherlands,’ he said. ‘We are aware of the moral aspect and the sensitivities involved in this issue and we invite everybody involved to share their experiences.’

Tabitha Oost, a junior researcher studying restitution policy at the University of Amsterdam, told DutchNews.nl that the criticisms could be judged valid. ‘Although the work of the Dutch restitution committee originally received international praise, ever since the fall of 2018 critical voices have increased rapidly,’ she said.

‘The inclusion in the policy of “the public interest” as a possible obstacle to restitution has been criticised by various stakeholders and has confused claimants. The Dutch restitutions committee is vulnerable to critique due to an ever changing patchwork policy and a perceived lack of transparency in its proceedings.’

James Palmer of the Mondex Corporation, acting for descendants of Emanuel Lewenstein, who own the Kandinsky painting in Amsterdam Stedelijk Museum but have been denied its return, added: ‘Any thorough, objective and compassionate scrutiny of the Dutch restitution committee is desperately needed and is certainly most welcome and in the long term interest of all parties.’