The original Dutch text is copied below, with an English translation here:

The art collection of the Jewish Dorville family was forcibly sold in 1942. Their watercolour by Félicien Rops is in the Royal Library of Brussels.

From our editor
Geert Sels

Brussels: Two weeks ago in Berlin, the German Minister of Culture Monika Grütters (CDU) returned three works of art to the heirs of Armand Dorville (DS 23 January). After Dorville died in 1941, his art collection came into the hands of an Aryan administrator. He decided to auction it off in Nice. It took four days to work through the 450 lots.

The three works that Grütters recently returned had ended up in Munich. They were in the collection of the son of Nazi art buyer Hildebrand Gurlitt. When his collection of 1,500 works came to light five years ago, Germany was exposed to the world.

Recently, the Louvre also discovered issues because of works by Dorville in its collection. The French museum had sent an envoy to Nice in 1942. He returned with twelve pieces, which are still in the collection. When the French art historian Emmanuelle Polack requested three last year for an exhibition at the Mémorial de la Shoah in Paris, she embarrassed the Louvre by promptly claiming them for the Dorville heirs.

A study by this newspaper shows that the Royal Library in Brussels also has a work from the Dorville collection in its depot. It is 'La buveuse d'absinthe', a watercolour by Félicien Rops dating to 1876. The Library did not aqcuire the painting directly but from a French art dealer in 1968. The documentation makes it clear that it is the same watercolour as the one that was auctioned off in Nice during the Second World War. 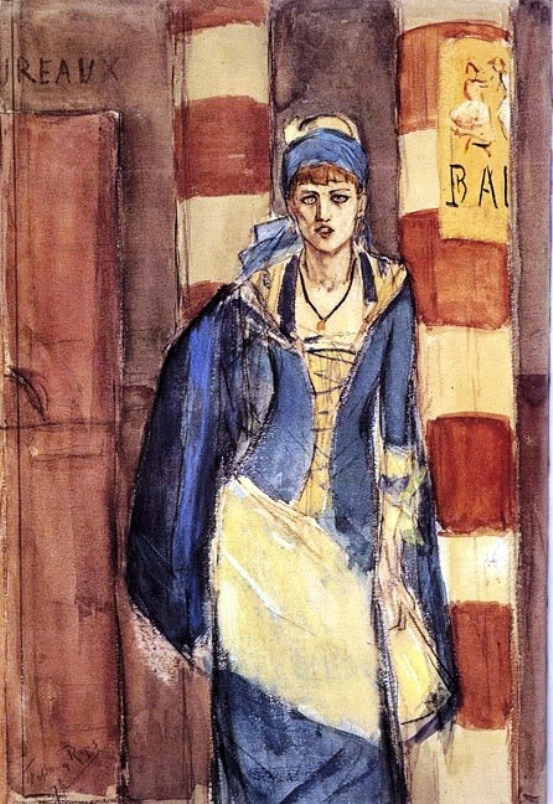 At the time, the auction was anonymised and presented as 'Vente du cabinet d'un amateur parisien'. A copy of the catalogue is kept in the archives of Paris. The watercolour is indicated there as lot number 370. It is one of the works of which a picture has been printed, so that it is easy to recognize. It becomes perfectly clear when the curator of the Print Room of the Royal Library shows us the works of Félicien Rops in the depot. The absinthe drinker is on offer and has an auction label on the back. That removes all doubts. 'Vente du cabinet d'un amateur' is on it, and the reference to the catalogue number is in handwriting '370'. 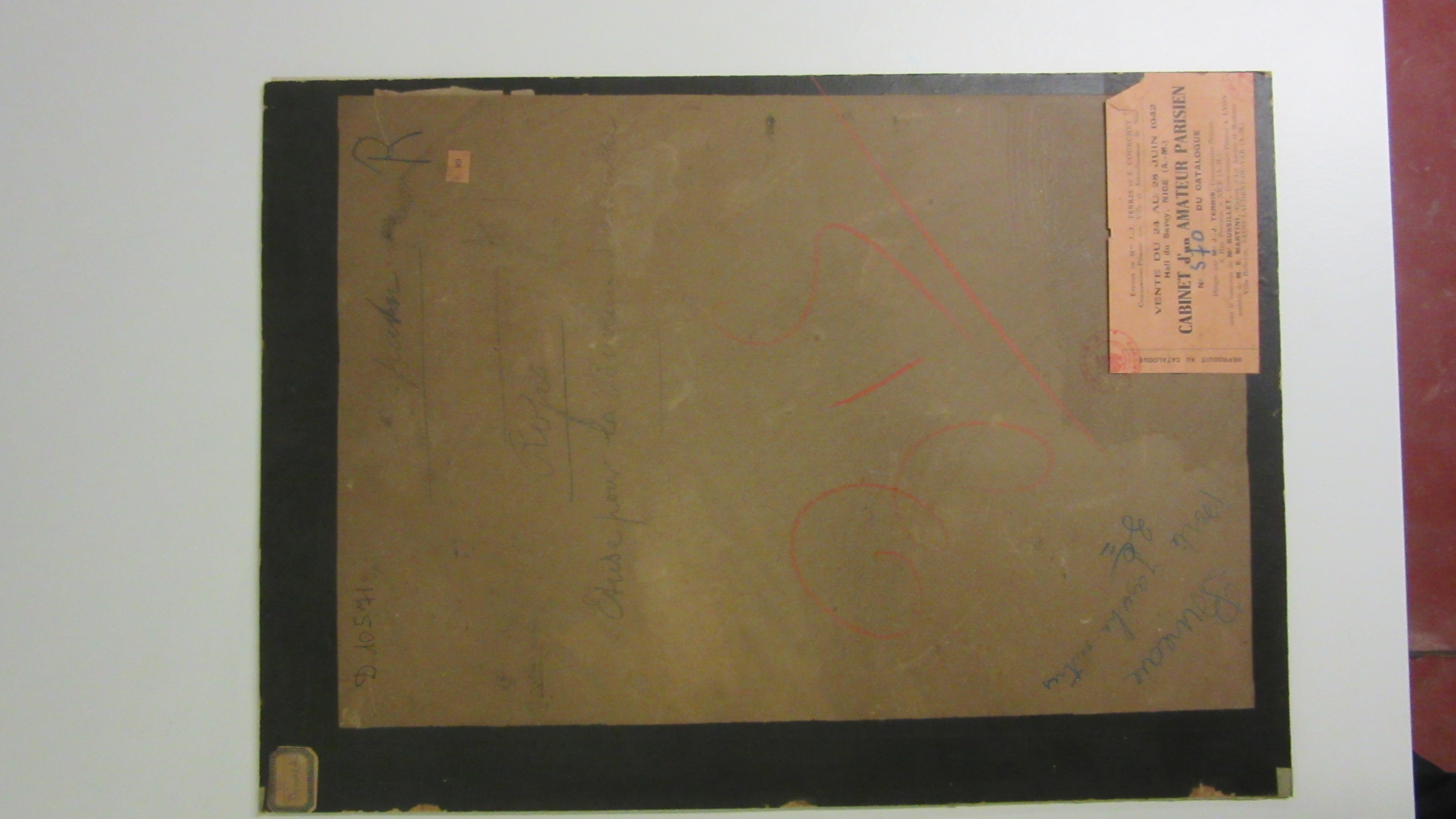 In an overview in which the Library groups its purchases by decade, the watercolour is also listed. In the provenance, the obscure history is actually mentioned: 'Collection Dorville, auctioned off in Nice in 1942.'

The Library regards the watercolour as an important Belgian heritage work. It is a well-known piece,' says Joris Van Grieken, curator of the Print Room, 'which has been published regularly and lent out for exhibitions several times. In 1985 it was part of the major Ropsexpo that took place in Brussels at the Botanique, and then visited Paris and Nice'.

Although the provenance is mentioned in its own catalogue, the Library did not realise that it could be looted art. We bought the watercolour in good faith in 1968,' says interim director Sara Lammens. After the war the Library bought thousands of works, which may not always have been thoroughly provenance researched. Often this was not possible, because pieces were offered on the market of which a piece of history was missing'.

The Library will investigate the matter further. Lammens: 'If it turns out that this is actually looted art and the next of kin were never compensated after the war, we will look at all the options. Even those of restitution or compensation'.

How we discovered the portrait of 'La Moustique

The catalogue of the 'Vente d'un amateur parisien' in Nice in 1942 contained a watercolour by Félicien Rops. We searched and found the work in the Royal Library of Brussels. We were not aware that this could be looted art,' says the management.

The three works of art that Germany returned two weeks ago had been identified by a French art historian. After years of archival work, Emmanuelle Polack was able to discover from the art mountain of over 1,500 works left by Nazi buyer Hildebrand Gurlitt that they belonged to the Dorville family. She had discovered that some remarkable auctions had taken place in Nice during the Second World War.

Polack stumbled upon an auction in June 1942 announced as 'Vente du cabinet d'un amateur parisien'. When she found the owners' details from that auction in the archives, her heart skipped a beat. The Parisian art lover was Armand Dorville. Armand Isaac Dorville, a Jew.

In her book that came out last year, she describes that Dorville was a prominent lawyer and politician from Paris. Soon after the occupation, he fled with his art collection to his castle in the Dordogne. There he died in July 1941. He did not have any children. His brother was in the resistance, his two sisters and their children were arrested and died in Auschwitz.

There was another reason why the family saw the inheritance disappear. In 1941 the Vichy regime passed a law to take the property of Jewish companies and owners,' mails Antoine Djikpa, who represents the Dorville family. The idea was to take every Jewish influence out of the economy and appoint an Aryan administrator. In this case it was Amédée Croze. He decided to auction off the art collection. Because the Jewish family members were deprived of their rights, they were not able to agree to the auction of their own free will. So it was a forced sale'.

The auction took place in the smart hotel of the Savoy Palace in Nice. It took three days to sell the 450 lottery tickets. Among them were two paintings by Pierre-Auguste Renoir, four by Pierre Bonnard, seven by Félix Vallotton and nine by Edouard Vuillard. There were also 95 watercolours by Constantin Guys. Because of the works, there was fierce bidding. Although the auction was anonymised (un amateur parisien), those in the art circuit knew only too well whose collection went under the hammer.

It is not at all surprising that one of the Nazis' most prominent art buyers, Hildebrand Gurlitt, sent out his men. He made use of mediators - he himself evidently did not like to expose himself to the Mediterranean sun. Three of the works he had purchased there were recently returned to the Dorville family in Berlin.

A venerable institution such as the Louvre did not hesitate to send its chief curator René Huyghe with a full wallet to the south. For 294,622 French francs, he secured twelve lots, including five watercolours by Constantin Guys and four by Henri Monnier. Most of these are still in the museum. This became clear when Polack requested three of them last year for an exhibition at the Mémorial de la Shoah in Paris. She embarrassed the Louvre by promptly claiming them for the Dorville heirs.

And then there was that colourful watercolour by Félicien Rops in the auction catalogue. That seemed to us to be something to find out about.

In the catalogue of the auction it is referred to as lot number 370. 'Etude pour la buveuse d'absinthe', it's called. We're lucky. There's a picture of it. A woman wearing an elegant, close-fitting blue dress leans against a pillar with red-yellow bands. There is a poster on it that says 'ball'. This woman is part of the nightlife. Her eyes are dark, her gaze is dull and her cheekbones are sharply defined. She looks tired. Art historians think it's Marguerite Joliet, nicknamed La Moustique, already addicted and seriously ill at the time Rops drew her.

But where would she be? Just as one can tell from a landscape in which direction the water flows, so it is a hypothesis that a work of art might one day return to its roots. That's where it has great heritage value.

The website of the Flemish Art Collection gives 148 hits for Félicien Rops, the vast majority of which are etchings and engravings in the Museum of Fine Arts in Ghent. She was not there.

Colleagues from Brussels have their collection online. There are seventeen pieces by Rops, including a painting of a woman from the Folies Bergère. It will probably be her colleague. Would she be in the Rops Museum in Namur? On the website there is a 'Buveuse d'absinthe', but it is a heliogravure and she is smaller in size. She doesn't look like this yet. It could be her sister, a few hours earlier in the evening.

Belgium still has one place that has a lot of works on paper: the Royal Library. The digital catalogue gives 3,652 hits for Félicien Rops. Fortunately, there are only thirteen at 'Buveuse d'absinthe'. Even then, we do not know whether they are entries in books, etchings, paintings or watercolours. The curator of the Print Room, Joris Van Grieken, shows us the way. He shows etchings, with and without colour, and explains how Félicien Rops used plenty of techniques.

She too has been given a new format. But on the old cardboard, which has been preserved for historical accuracy, there is a salmon-coloured label in the lower right-hand corner. While we allow ourselves to have it explained how Rops applied the watercolour technique, supplemented with gouache and black chalk for the lines, we cannot take our eyes off the label. "Cabinet d'un amateur parisien", it says. In the lottery number, someone entered the number '370' in solid blue pencil strokes. Just like in the auction catalogue kept in the Paris archive. There is no longer any doubt: this is the same work.

To our surprise, the Library has the ultimate proof in its own documentation. One of the lists of acquisitions, in which the institution groups its purchases by decade, states as its provenance: 'Collection Dorville, auctioned in Nice in 1942'. And also: 'Purchased from art dealership M. Lecomte in Paris in 1968'.

Our list of acquisitions shows that the original owner's name was Dorville,' says interim director Sara Lammens. 'We will check what was known about this provenance at the time of the purchase. It's a wonderful work that we wouldn't like to give up, but we endorse the Washington Declaration that governs the restitution of Nazi looted art, and we'll act accordingly'.