Painting looted by Nazis found in Royal Library of Belgium

A painting looted by the Nazis from a Jewish art collector family has been found to be in possession of the Royal Library of Belgium. 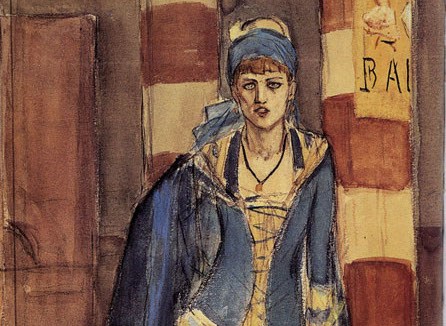 La Buveuse d'Absinthe by Belgian painter Félicien Rops is currently in possession of the Royal Library of Belgium.

The painting is an 1876 watercolour by Belgian artist Félicien Rops, titled “La Buveuse d’Absinthe” (The Absinthe Drinker), kept in the library’s print room.

The art piece originally belonged to the Dorville family, the descendants of Jewish lawyer and art collector Arthur Dorville, forced by the Nazis to sell his collection in 1942.

The library said it was unaware that the painting had been stolen and that it acquired it in the 60s from a French art dealer, alongside thousands of other artworks.

“We bought the watercolour in 1968 in good faith,” Sara Lammens, the library’s interim art director told Le Vif. “After the war, the library bought thousands of works, whose provenance was not always thoroughly checked.”

“Often, this was not possible because it concerned art pieces who were put on the market with an incomplete historical record,” Lammens added.

She said the library would look into the matter and, if the robbery was confirmed and if the Dorvilles were never indemnified for the theft, it would either return the painting or offer compensation for it.

On January 23, as part of a government program to return art pieces stolen during the Nazi plunder, Dorville’s descendants were given three pieces of art stolen from the Jewish art collector during the Nazi occupation of France.

German culture authorities said that while it was “no longer possible” to make up for Dorville family’s suffering under Nazi rule, returning the looted goods constituted an “important gesture of historic justice.”