The Stiftung Preussischer Kulturbesitz (Prussian Cultural Heritage Foundation, or SPK) in Berlin announced that it had agreed to restitute a 1537 painting of the biblical figure Lot by Hans Baldung Grien to the heirs of Hans Purrmann, a German painter persecuted as a “degenerate” artist in the infamous Nazi action of the same name. Purrmann sold the Grien painting in 1937.

Remarkably, the SPK agreed to restitution notwithstanding the SPK’s stated belief that Purman was paid fair market value. This stands in distinction to the SPK’s refusal to restitute the Welfenschatz (Guelph Treasure) that was transferred to agents of Hermann Goering by its Jewish owners (to whom my clients are heirs) in 1935 on the justification, among other reasons, that the sellers were paid “enough.” In its statement dated yesterday (so far available only in German), the SPK said (my translation), “Though he received a price that was consistent with the market at the time, from today’s assessment the occasion for the sale was Purrmann’s financially difficult situation as a result of persecution.” Putting “degenerate” artists in the category of victims that qualify is a first. 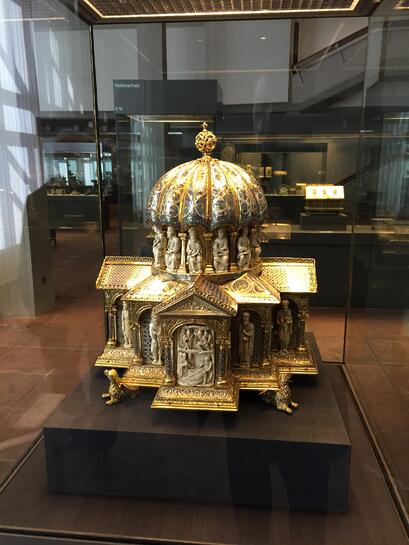 Failure to receive fair value is a key component of a sale under duress. In other words, a sale that happened only because the seller was in financial straits as a result of recognized persecution is not a fair sale. This is obvious, but the SPK resists this logic in the restitution of Holocaust persecution.  The SPK’s (inaccurate, and contradicted by appraisal) defense to the Welfenschatz claim has been that those owners received close enough to market value. Thus, the SPK is willing to reject the heirs of Jewish owners that were paid less than full value in a transaction involving the very worst Nazis, while patting itself on the back for returning a work that it believes received full price. This contrast is indefensible.

None of this should be read to criticize the Grien restitution, indeed that is the point. The “degenerate” art action of 1937, in which modern artist or those using elements of “inferior” racial groups were deemed impermissible, is one of the signal events of Nazi Germany’s cultural warfare. It was both deplorable and deeply cynical—after declaring certain art to be contraband, Nazi Germany created a monopoly in its trade for four art dealers (Hildebrand Gurlitt, Karl Buchholz, Ferdinand Möller, and Bernhard Böhmer), thus driving up the price for sale abroad (proceeds that the Nazi state kept for itself). Great works were stripped from German state museums and sold.

Sales under duress, and the horrible and impossible choices faced by its victims, requires a sensitive and empathetic analysis. The Purrmann restitution is a wise and laudable one.

Yet compare it to the Welfenschatz case. While the SPK has quibbled with my clients’ appraisal, there is no doubt that the sale price was a fraction of what they paid for it. The German government argues about the magnitude of this fraction, and claims this is the result of the Depression—so why wasn’t the Purrmann sale similarly depressed in value? The answer is obvious, and it is the identity and status of the seller.

I am often asked whether this kind of stubbornness by the German government is motivated by anti-Semitism. I equally stubbornly avoid taking a position on that question, but this latest contrast makes the inquiry ever more uncomfortable. There is another, perhaps another explanation. As noted above, the “degenerate” art action deprived German museums at the time—among, if not the, best in the world—of their collections of contemporary and modern art, removing great Expressionist and New Objectivity (Neue Sachlichkeit) painters like Kirchner, Beckmann, Freund, and Grosz from their walls. These are a matter of great art historical and political importance, but not as a matter of restitution or title defects for the simple reason that the German state was the owner at the time and chose to sell them, for whatever ill-conceived reasons. These works are dispersed around the world, many in plain sight. Is today’s restitution the first step in building a rationalization to ask for their (unwarranted) return to Germany? The SPK long ago forfeited the benefit of any doubt.