Despite the Polish government’s efforts to recover cultural objects lost during World War II, researchers say its museums hold stolen items left behind by the Nazis. 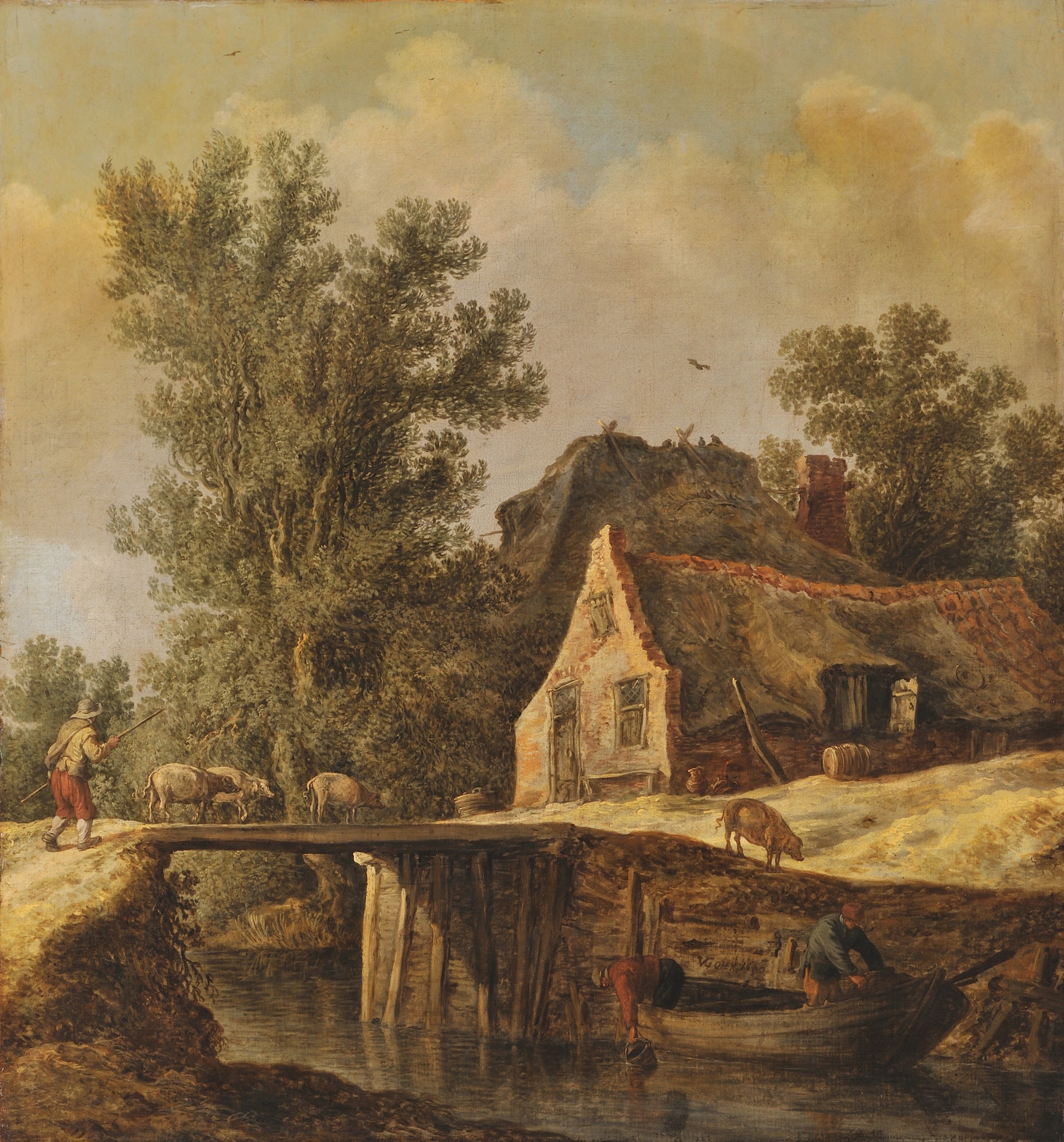 Researchers say Jan van Goyen’s 1638 painting “Huts on a Canal,” now at the Gdansk National Museum in Poland, was stolen from a Dutch art dealer during World War II.

The systemic looting of Poland by the Nazis during World War II still resonates today in that country, where officials continue to seek the return of more than 63,000 works of art and cultural properties, many of which were stolen from Jews there.

But experts say Poland has done a poor job of providing the same justice to Dutch Jews and others whose art works were stolen during the war and ended up in German-occupied Poland and now are part of official museum collections.

Seven Dutch works that researchers have identified as missing are held by one museum in Gdansk. Scholars say they suspect dozens more are in art institutions in other Polish cities where the Nazis stored cultural artifacts they had looted, or bought under dubious circumstances, from the Netherlands.

“The Polish government wants to have as much as possible back,” said Kamil Zeidler, a law professor at the University of Gdansk who has studied the issue, “but they don’t want to give anything back to others.”

For example, according to a report prepared in 2018 but never publicly released, 81 works seized in the Netherlands by the Nazis or their agents most likely ended up in occupied Poland. The report, by the Origins Unknown Agency, a Dutch organization that investigates cases of looted art, was commissioned by the Conference on Jewish Material Claims Against Germany. But the Polish museums and authorities have not done much to track the works, the researchers said.

“There is no commitment at a museum level, or at a national level, or at a political level to return these works that are in the country,” said Anne Webber, the founder and co-chair of the Commission for Looted Art in Europe, a London-based nonprofit that helps to foster restitutions. 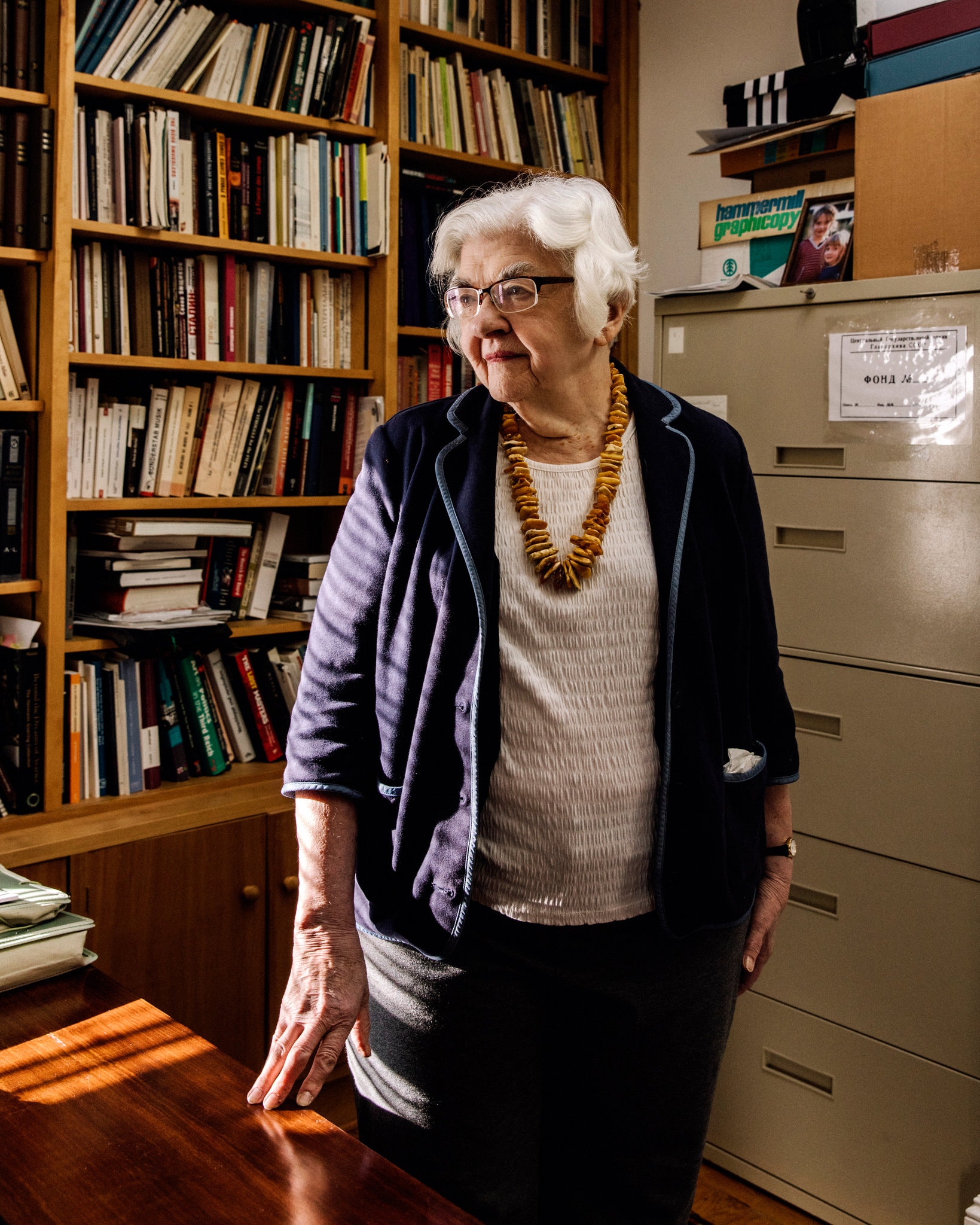 In a study she conducted, Patricia Kennedy Grimsted, a Harvard University researcher, found that several works looted from the Netherlands were in the collection of a Polish museum in Gdansk.

Recent work by Patricia Kennedy Grimsted, a senior research associate at Harvard University’s Ukrainian Research Institute, has traced two works now housed at the National Museum in Gdansk back to Dutch owners who lost them in the war.

One is Jan van Goyen’s 1638 painting “Huts on a Canal,” which portrays a farmer and his pigs crossing a rickety bridge near thatch-roofed houses. It hung in the Amsterdam gallery of the Dutch Jewish art dealer Jacques Goudstikker in May 1940, when he died trying to flee the Nazi invasion, she said. It has been in the Gdansk National Museum for decades.

“Poland still lacks a viable procedure for processing restitution claims from Holocaust victims both within the country and from abroad,” Ms. Grimsted wrote in an article to be published in the International Journal of Cultural Property.

In response to questions from The New York Times, curators at the Gdansk museum acknowledged that six other paintings in their collections are also identified on the Origins Unknown Agency’s list of missing Dutch works thought to be in Poland.

In addition to the van Goyen, the art includes paintings attributed to Pieter de Hooch and Ferdinand Bol. One of the works, by Jacob van Ruysdael, was taken from a Jewish publisher in Berlin, German researchers found, and ended up in the hands of Dutch art dealers who appear to have sold it to the museum in Gdansk.

Willi Drost, the director of the Gdansk art museum during the war, was an avid buyer of Dutch old master paintings, according to the Origins Unknown Agency report.

Magda Mielnik, curator of the historical art department at the Gdansk museum, said she and her colleagues are working to document the history and provenance of the collection with a plan to publish a book about all the works next year. “The paintings looted from the Netherlands are an important part of our research,” she said.

Frank Lord, a New York-based lawyer for the Goudstikker heirs, said the family believes two works in the museum are from the Dutch art dealer’s collection. He declined to discuss any plans to seek their return.

The Polish Culture Ministry, which has actively sought the return of art the Nazis looted from Poland, suggested the criticism is unfair. “So far, the Ministry of Culture and National Heritage has not received any restitution claims from the Dutch government regarding works of art plundered during World War II from the Netherlands and located in Polish museums,” the ministry said in a statement. 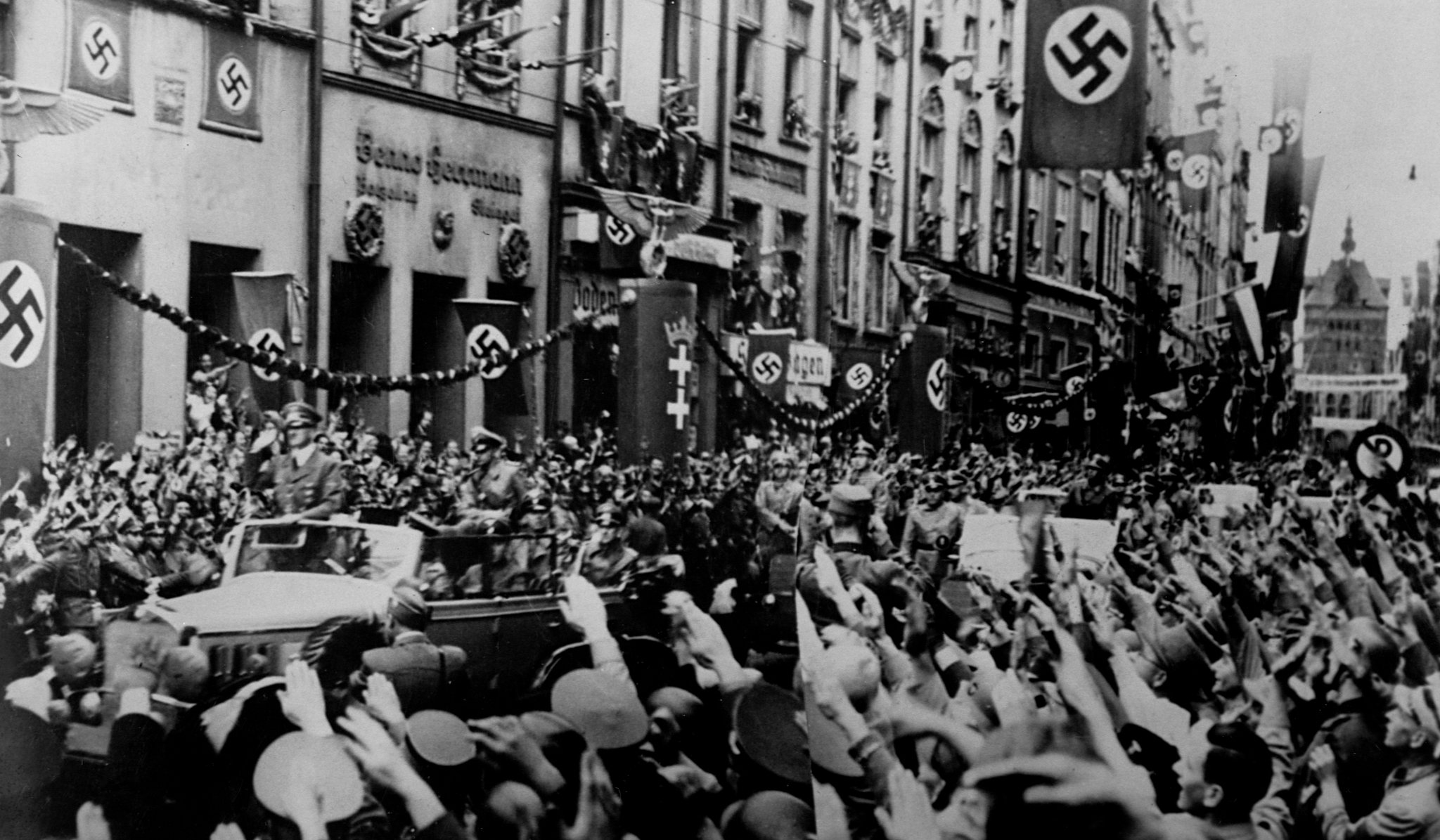 Hitler enters the city of Gdansk, known as Danzig in German, after the Nazis’ 1939 invasion of Poland.

The Polish government, the statement said, only responds to claims that are placed before it through “an official government procedure on the basis of international law.” Individual claimants, it noted, could also pursue restitution through the courts.

The Dutch Ministry of Culture said restitution claims should be filed by individuals, not the state. “Should a Dutch citizen need help from the Dutch state, they will receive the required support” said Martijn Kamans, a ministry spokesman, in an email.

Dutch museums have also confronted criticism that they have not done enough to return works of art to owners who lost them during World War II.

As frustrating as Polish efforts have been to outside researchers, inside the country there is a broad sense that people beyond Poland’s borders need to recognize the scale of the losses in that country, where millions died and some 500,000 cultural objects went missing during the war.

“We have to stress and we need to mention that Poland as a country was a victim and probably was the biggest victim of the Second World War concerning the looting of cultural property,” said Professor Zeidler.

At conferences on the restitution of art looted during the Holocaust, an adviser to the State Department, Stuart E. Eizenstat, has identified Poland as one of several countries that have failed to live up to the 1998 Washington Principles, which set requirements for international cooperation in returning plundered art.

Mr. Eizenstat said in an interview last month that he considered it urgent that the Polish and Dutch authorities form a joint working group to try to identify and return the dozens of artworks that have already been tracked to Poland. “But more broadly,” he said, it would help if Poland undertook “a thoroughgoing provenance research project to determine whether or not they are holding other Nazi-looted art, not that they took, but that migrated to Poland in one way or another.”

Just as important, he added, is that other countries access the Polish database of its war losses to ensure the return of “any of those objects taken from within Poland’s World War II borders.”

The database created by Dutch researchers lists some 15,000 works still missing from the Netherlands, though experts call that a partial count.

During the war, Dutch Jewish families were required to relinquish all property to a formerly Jewish bank, Lippmann, Rosenthal and Co., which the Germans “Aryanized” and looted. Artworks from Jewish-owned galleries were “purchased” at cut-rate prices by Nazi art agents, and often sold to top Nazi officials. 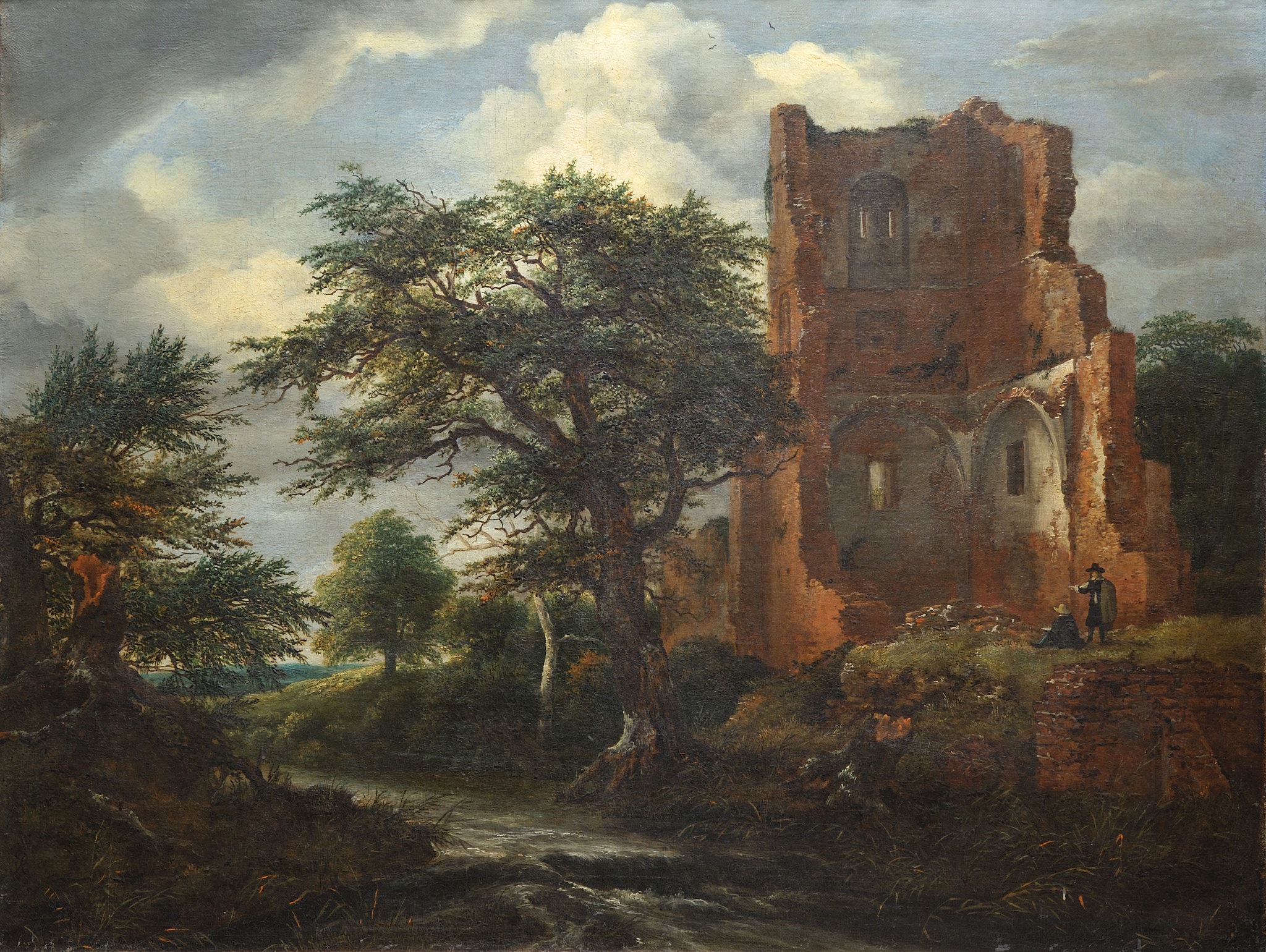 Researchers say Jacob van Ruysdael’s romantic 17th-century landscape with a ruin, taken from a Jewish publisher in Berlin, is one of the works in the Gdansk museum that should be restituted.

Some of this art was later sold through dealers or auction houses in Poland under the control of the German Reich. “The Germans used the Polish museums as depositories for looted art,” explained Ms. Webber.

Ms. Grimsted said a group of paintings from the Netherlands ended up in Gdansk through Albert Forster, the Nazi governor who targeted Jews and other Poles for death “while promoting Nazi art preferences in the local museum, which became a gathering point for Nazi-looted works of art.”

After the war, the territory was returned to Poland, though some of the Dutch art was probably carted off to the Soviet Union by the Red Army, as were many museum records.

Ms. Mielnick said in an interview that the museum is making an earnest effort to identify and return paintings but that the process is difficult. “It is worth remembering,” she said, “that many documents are nonexistent or in many different institutions, sometimes like puzzles that you need to put together.”

Piotr Michałowski, the curator of the gallery of European Art at the Polish National Museum in Poznan, said in an interview that in 1945, almost all the museum’s records were destroyed, either burned during fighting between German and Soviet forces or taken to Russia.

“We have no inventory books and no other records connected with collections and everything that happened with the Second World War here,” he said.

Mr. Michałowski said that the museum has not yet conducted provenance research of its collection, but is planning to do so in the next couple of years. He said he knew of eight paintings that had been purchased by the museum in 1942 at the Dorotheum auction house in Vienna, two of them by Dutch masters, and one with a label from the Goudstikker Gallery. He also found a painting the museum had purchased in 1942 from the Galerie Gurlitt in Berlin, owned at the time by Hildebrand Gurlitt, a dealer the Nazis had assigned to sell art seized from museums and Jews.

Although these works have a dubious provenance, more research is needed to determine whether they were looted from Jews in the Netherlands.

Gideon Taylor, chair of operations for the World Jewish Restitution Organization, an advocacy group based in New York, said Poland should take two steps to catch up with international restitution standards.

“The first step is transparency: to make publicly available information about what artworks it holds so that families can know that these works still exist,” said Mr. Taylor. “The second is to set up a process to deal with claims to return those works to those families. So far, we haven’t seen any progress from Poland on either of those two steps.”