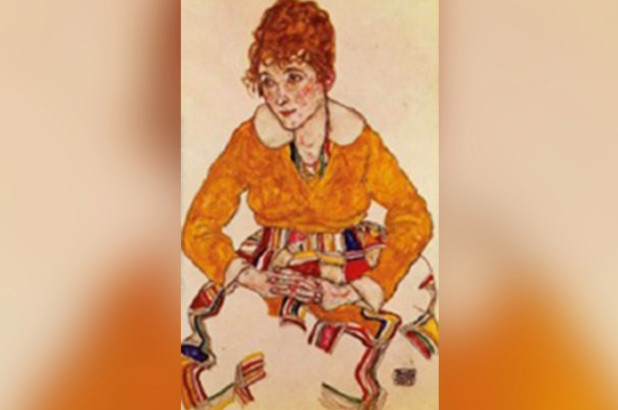 Portrait of the Artist's Wife" by Egon Schiele

A 98-year-old Bronx woman is one of two heirs of Holocaust victims battling the famed Lehman banking family for ownership of an $8 million masterpiece looted by the Nazis.

The legal battle royale is over the 1917 watercolor “Portrait of the Artist’s Wife” by Austrian painter Egon Schiele.

The work is currently owned by the Robert Lehman Foundation — part of a fine art collection amassed by the late founder of Lehman Brothers — and was purchased in 1964 by the banker’s son Robert “Robin” Owen Lehman in London, according to court papers. It was to be put on the auction block in 2017 at Christie’s.

But, as part of its due diligence, the auction house had alerted Jewish authorities in Vienna, seeking more information about the provenance.

The Israelitische Kultusgemeinde (IKG), an organization that represents the Orthodox Jewish community in Vienna, told the auctioneer that the piece had belonged to Viennese collector Karl Maylander, who was forced to surrender his entire art collection to a female companion before he was deported to Poland in 1941. He was later killed at Auschwitz.

The Viennese Jewish group claimed he handed over his collection to Etelka Hofmann, the companion, under duress. The group said Maylander’s nephew, who settled in New York, was his lawful heir. Eva Zirkl, the nonagenarian who lives in the Bronx, is the only surviving heir of Maylander, according to the IKG.

In April 2016, “after nearly 20 years of fighting” the Leopold Museum in Vienna agreed to return two other stolen Schiele portraits that once belonged to Maylander to Zirkl, Smithsonian Magazine reported.

Not much is known about Zirkl except she arrived in New York from Nazi Germany in 1938 when she was 18, according to court papers.

A Post photographer and reporter encountered a frail Zirkl outside her Bronx apartment building Thursday. The 98-year-old, who uses a walker and needed the assistance of a health aide, did not respond to questions about the court battle.

In addition to Zirkl’s claim, the heirs of a Jewish man who died in the Theresienstadt concentration camp in what is now the Czech Republic are also demanding the return of the Schiele watercolor. In that claim, filed in Manhattan Supreme Court, the Schiele painting was stolen by the Nazis from Schiele’s dentist, Heinrich Rieger.

The legal showdown is currently taking place in upstate Monroe County, near Rochester, where the Lehman family, who has a home in the area, is suing the competing Holocaust heirs.

Last month, upstate Judge Matthew Rosenbaum denied motions to change the trial venue to Manhattan, writing that the “costs for lodging and dining are far lower” in Monroe County than in New York City. His decision irked Lehman’s legal adversaries.

“Both sets of Holocaust heirs believe Lehman’s got stolen property and is engaging in abusive litigation tactics set up to avoid the truth,” charged attorney Raymond Dowd, who is representing two Rieger heirs, who hail from NYC and Israel.

But the judge abruptly stepped down from the bench last month under allegations of misconduct, according to the Office of Court Administration.