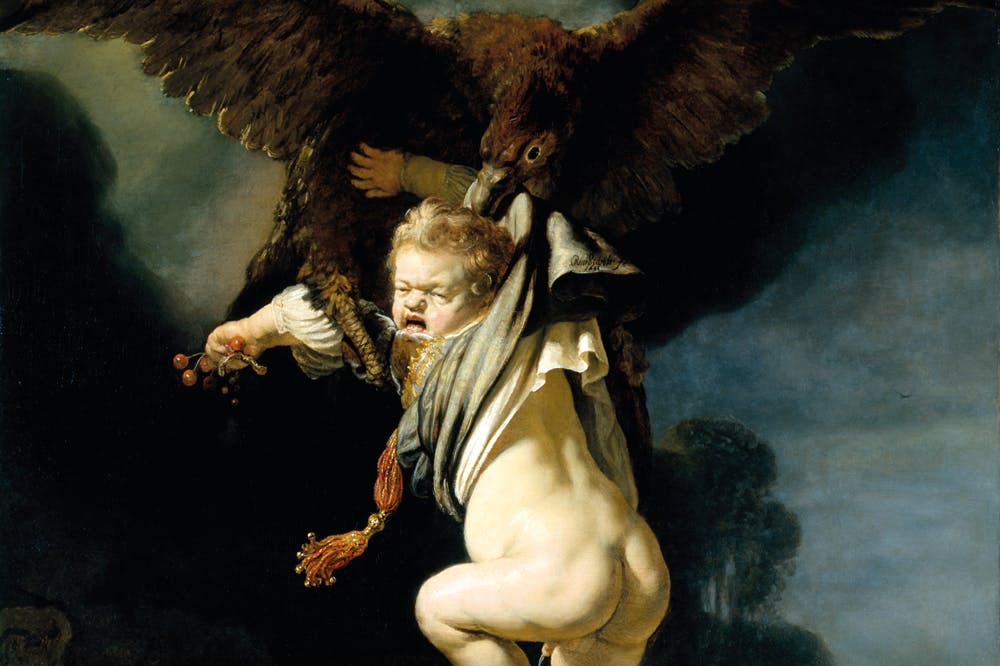 By the end of the Second World War, an estimated 20 per cent of all the art in Europe was in Nazi possession. Some works were later recovered, but millions of paintings and sculptures, as well as books and archives, were not. Three-quarters of a century on, fallout from this era still drifts across continents. An occasional lawsuit will revive debate about cultural patrimony on the opinion pages; a Sotheby’s lot at an auction might surface an Old Master painting found in a Bavarian basement. Most of these cases involve the descendants of private collectors forced to sell or hand over works. These are windows on to specific personal histories, yet they are only a part of a much larger story. More than 60 years after the war, more than a million artworks taken from Germany by the Red Army at the end of the war are still being held in Moscow and St Petersburg.

Believing Slavic culture to be inferior to their own, the Nazis had no reservations about eradicating it. During their invasion of the Soviet Union, the Germans set churches ablaze and destroyed 427 museums, roughly 4,000 libraries and an estimated 110 million books. In 1942 Stalin formed the Extraordinary State Commission, ostensibly to document these losses and make a list of ‘eventual equivalents’: European masterpieces that would serve as substitutes for the works that had been lost. Once seized, these pieces would be displayed in his planned Museum of World Art, the Soviet counterpart to Hitler’s imagined Führermuseum. Nothing so orderly took place. Instead, says Frank Grelka, a historian of Eastern European Studies at the European University of Viadrina in Frankfurt, the ‘Trophy Brigades’ created by the commission simply took whatever they wanted. Within months after the fall of the Third Reich, thousands of troops were fanning out across the Soviet Occupation Zone in the east of the country and packing up works to send to Moscow.

Once in Soviet hands, war bounty – whether it was art, industrial installations, or the contents of scientific labs or archives – effectively disappeared. For decades, Soviet officials flatly denied the trove’s existence. It wouldn’t be until the early 1990s when the real story began to come out: once in the USSR, artworks had been sealed in vaults, many in Moscow’s Pushkin Museum, and their existence declared a state secret.

In 1991, Russian art historians Konstantin Akinsha and Grigorii Kozlov revealed the existence of the Trophy Brigades, and the fate of millions of artworks, in a groundbreaking article in ARTNews. In July 1945, they wrote, a military plane coming from Berlin landed at Moscow’s Vnukovo Airport: ‘On board was an extraordinary cargo: seven large crates addressed to the Committee of Arts of the Council of Peoples Commissars of the USSR.’ In the crates were works by Velázquez, Monet, Renoir and El Greco, to name just a few. 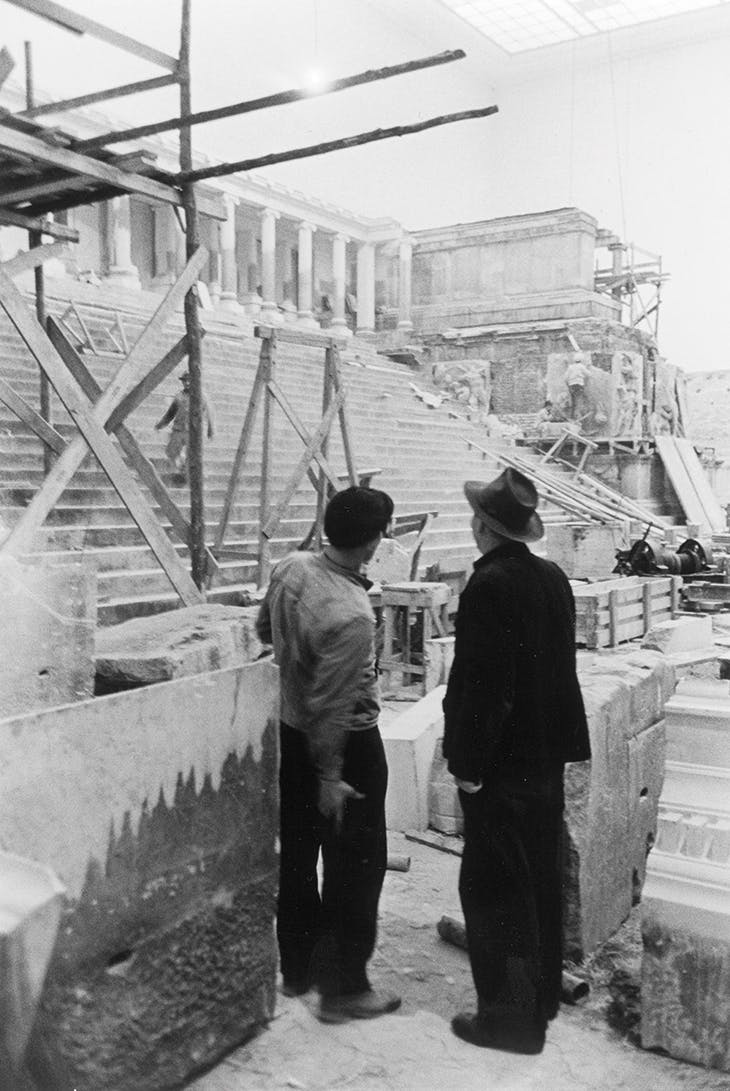 The restoration of the Pergamon Altar, which had been taken from Berlin to the Soviet Union and returned in 1955.

This was only the beginning. By the time the Trophy Brigades working under the direction of the Arts Committee had finished sweeping the state museums and private collections in the Soviet Occupation zone, they had claimed an estimated 2.5 million artworks and 10 million books and manuscripts. This included Old Master paintings, Gutenberg Bibles, Merovingian treasures, and items of national pride, such as the archives of Walter Rathenau, Germany’s Foreign Minister in the interwar period. They were hidden away, with one big exception: between 1955 and 1958, the USSR ‘donated’ 1.5 million artworks, including the Pergamon Altar, the ‘Green Vault’, and more than 1,000 paintings from the Gemäldegalerie Alte Meister in Dresden to the government of East Germany as a gesture of goodwill. 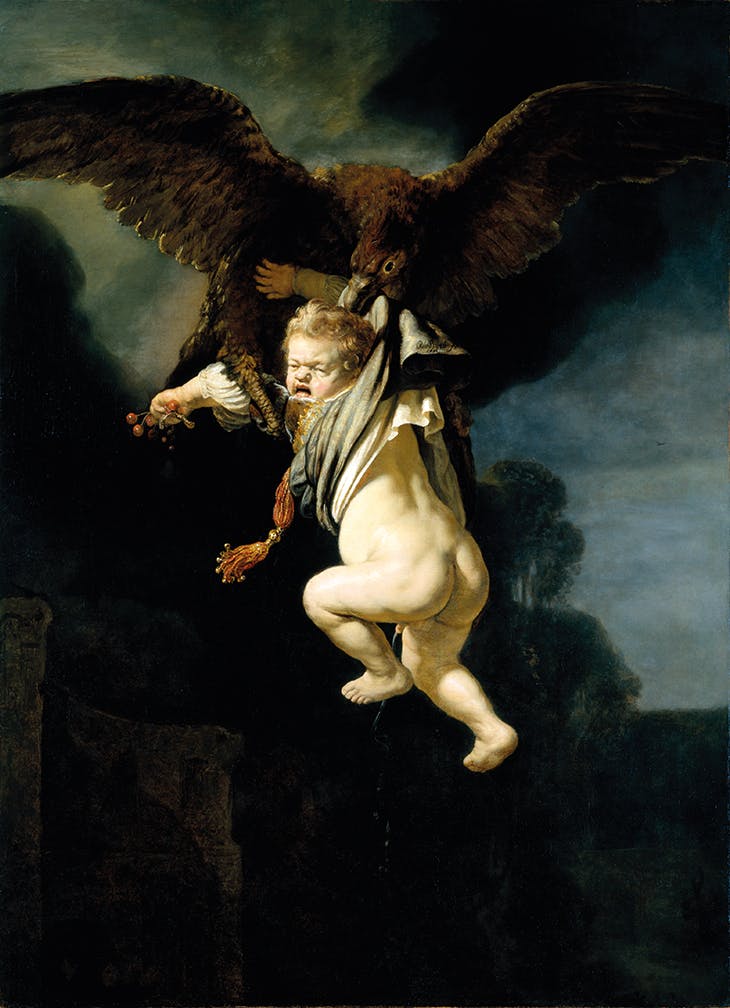 The Abduction of Ganymede (1635), Rembrandt van Rijn – one of the paintings returned by the USSR to the government of East Germany in 1955.

Whether the work of the Trophy Brigades was theft or restitution depends on where one’s sympathies lie. While most legal scholars agree that the Soviet Union violated the 1907 Hague Agreement, which clearly forbids the seizure of cultural property during wartime, recent Russian governments have applied a different ethical arithmetic. ‘Thirty Russian towns were wiped from the face of the earth, hundreds of museums were pillaged or reduced to ashes,’ Yevgeny Sidorov, Boris Yeltsin’s Culture Minister, told AFP in 1995 while defending Russia’s claim to the art. ‘Who will compensate for these losses?’ Over the years, the cache has taken on additional meaning. According to Grelka, ‘art trophies from Nazi Germany became an “acquired” part of the cultural heritage of the Soviet Union’, as well as key to the post-imperial narrative of the Russian national identity. And the stakes weren’t exclusively symbolic: rough estimates put the value of the trove at $6.4 billion.

In the years immediately before the fall of the Soviet Union, it looked as if settlement of the dispute was possible: West Germany and Russia were willing to talk, and in 1990 they even signed a treaty stipulating the return of ‘unlawfully removed art treasures’. But nothing has happened. Newly reunified Germany refused to cede any ground, Russia grew more attached to the trove and the art remained in the vaults. In 1995 the Russian Duma proposed a law halting further cultural restitution, effectively mandating the works stay in Russia.

Earlier in 1995 the Pushkin Museum in Moscow and the Hermitage in St Petersburg had put on shows featuring a selection of the absconded works. The Pushkin went as far as to title its exhibition ‘Twice Saved’, a cheeky homage to both the Soviet victory over the Nazis, and the work of Russian conservators in preserving their spoils. (It was also not a coincidence that the shows were timed to coincide with the 50th anniversary of Russia’s victory over Germany.) The New York Times described the exhibitions as ‘a major leap in [Russia’s] coquettish dance with honesty’ about the looted art.

In Moscow, the Pushkin showed 63 paintings and drawings by Lucas Cranach the Elder, Veronese, El Greco, Degas, Daumier, Renoir, Tintoretto, and Goya. In St Petersburg, the Hermitage show opened several weeks later, and included 74 Impressionist and Post-impressionist canvases; including six by Monet, four by Gauguin, seven by Cézanne, 15 by Renoir and four by Van Gogh. Details of both shows were kept secret until the last minute, leaving audiences and scholars to speculate about what might be included. Moreover, many of the works had never been displayed in public, as they had previously been in private collections.

The Pushkin was criticised for displaying two paintings – Goya’s Carnival and Renoir’s Chrysanthemums and a Japanese Fan – that had belonged to Hungarian Jewish collectors persecuted by Nazis. Russian officials were also attacked for failing to differentiate between perpetrators and victims, or considering how the works had been acquired. Nevertheless, Russian curators seem to have been emboldened by the exhibitions’ success. The following year, the Pushkin mounted a show of ‘Priam’s Treasure’, a collection of some 260 Bronze Age-items excavated between 1873 and 1890 from the site of Troy by amateur German archaeologist Heinrich Schliemann. With its questionable provenance, this was a canny decision. While the Red Army had discovered the objects in a bunker near the Berlin Zoo, Schliemann himself had originally smuggled them out of Anatolia. When the exhibition opened, both Germany and Turkey requested the artefacts’ return.

Russia had no intention of fulfilling either request. In 1998, President Yeltsin signed the law, that he had initially vetoed, stipulating that all cultural assets transferred from Germany to the Soviet Union after the Second World War were legally Russian property. The following year Russia’s Constitutional Court upheld that ruling, but added an exception for works formerly owned by Nazi victims. Nevertheless, discourse around restitution was beginning to shift. In 1995, the three-day ‘Spoils of War’ symposium in New York City was the first major public conversation around Soviet and pan-European cultural losses in the Second World War. Suddenly, a discussion that had previously focused mostly on Jewish cultural losses at the hands of the Nazis expanded its scope.

However, while the German and Russian governments remained at an impasse, private citizens and museums were exchanging and returning lost artworks. In 2000 the Kunsthalle Bremen arranged a trade with the Catherine Palace in St Petersburg, swapping a folio of more than 100 drawings for a Florentine mosaic and an 18th-century chest of drawers from the fabled Amber Chamber. In 2001, Ukraine gave Germany the archives of the Berlin Sing-Akademie, which included original scores from the Bach family archive; and over the past 10 years, researchers estimate that German and Austrian libraries have returned around 30,000 books to their owners or inheritors.

Then, in 2005, the German-Russian Cultural Dialogue was founded to create contacts between the two countries and to ‘reconstruct the history of the archive’, as director Britta Kaiser-Schuster tells me. The organisation works with some 80 museums in Germany as well as the Pushkin, Hermitage and State Archives in Moscow to restore artworks and books displaced or damaged by war. In practice, this is often forensic: as fragments of a work might be distributed across museums in Germany and Russia, art historians and researchers are tasked with identifying the pieces, collaborating with their foreign counterparts to fit them together and establish a provenance. To date, they have identified more than 10,000 pieces and reconstructed many others, including hundreds of sculptural and Byzantine works from Berlin’s Bode Museum. They have also facilitated returns by private collectors, and worked with museums in both countries on collaborative exhibitions, including the first major Cranach show in Russia. 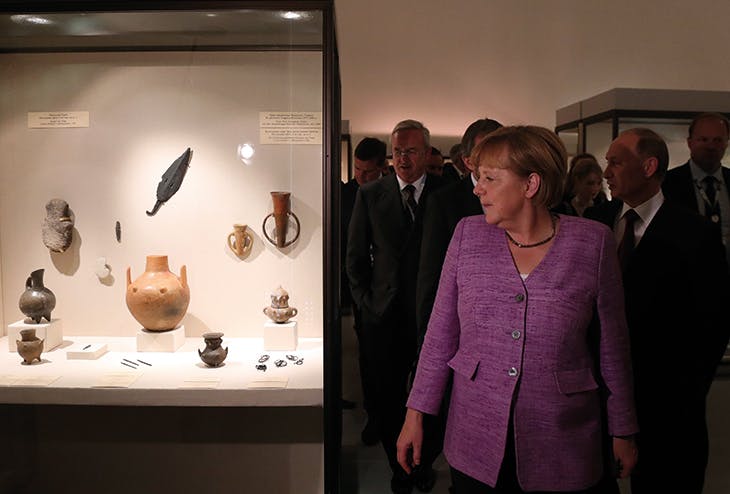 Angela Merkel and Vladimir Putin visiting ‘The Bronze Age of Europe: Europe Without Borders’ at the State Hermitage Museum in St Petersburg in June 2013.

At a national level, negotiations remain at a standstill. In 2013, Angela Merkel and Vladimir Putin cancelled speeches at the opening of an exhibition in St Petersburg after the Russians found out Merkel planned to ask for the return of works. Since then, the matter has gone largely unmentioned. But the recent trend towards non-governmental cultural diplomacy could have the effect of what Wolfgang Eichwede, the director of the Research Centre for East European Studies at the University of Bremen, calls ‘liberat[ing] this issue from the mindset of national prestige’. The growing acceptance of ‘trophy art becoming world art’ combined with the lack of political interest in the issue ‘theoretically offers brilliant opportunities for finding an acceptable solution for both sides’, says Grelka. Solutions might include encouraging Russian museums to be more transparent about their holdings, and prodding the German government to fund joint exhibitions. Concerning the latter, there is no shortage of opportunity. While sifting through the archives of the Pushkin Museum, Grelka’s research team recently discovered a complete copy of the so-called Dresdner catalogue, a collection of 10,000 index cards listing the artworks Hitler wanted to display in his Führermuseum. This revealed reams of new information about the provenance of works, many of which had belonged to Holocaust victims. And so, a new chapter begins. As researchers and historians reassemble the pieces of one archive, they can also reimagine what ones in the future might look like.