China pledged big investments in Greece and signed 16 agreements. But it turns out that the repatriation of artifacts is also drawing the nations closer. 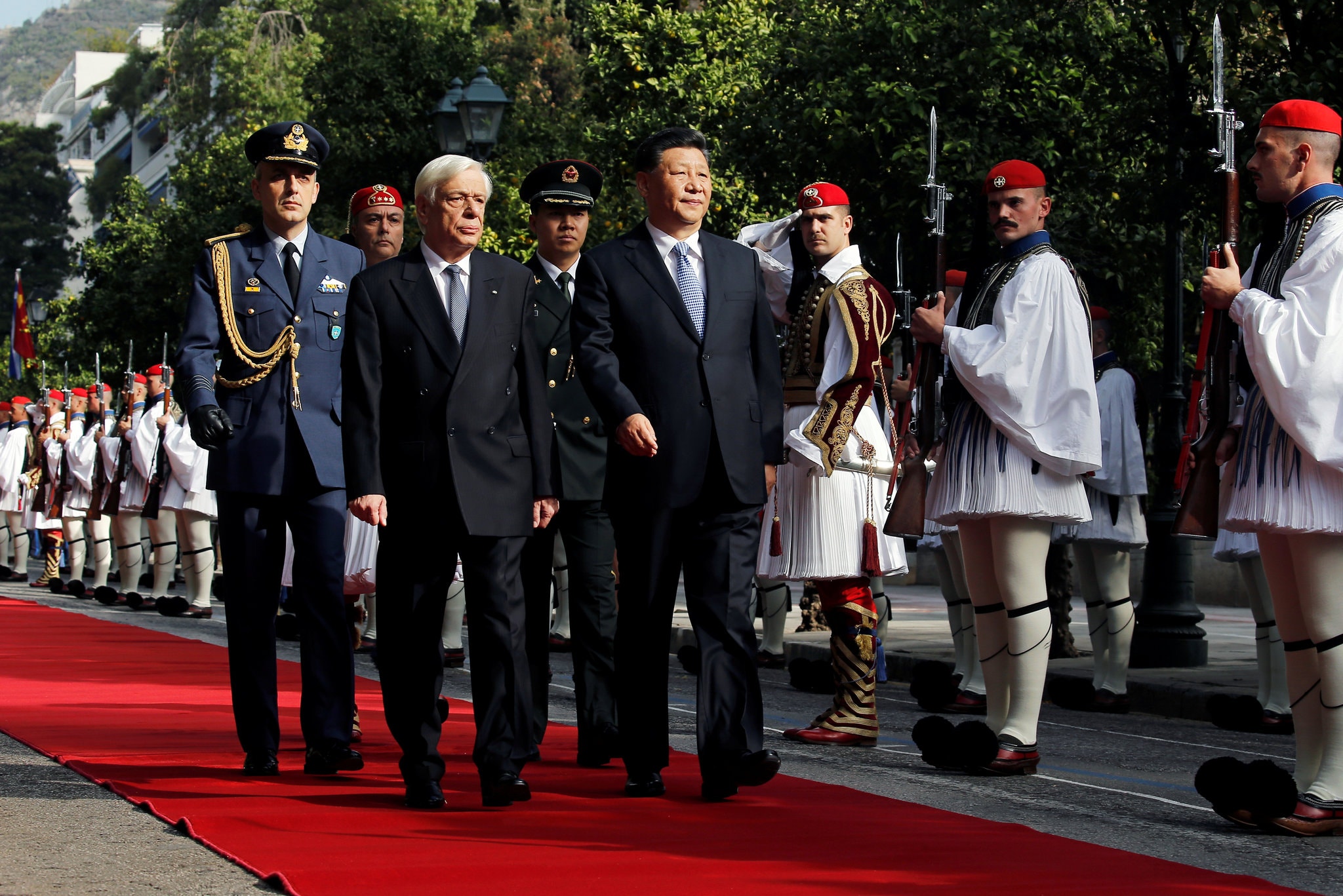 President Xi Jinping of China with President Prokopis Pavlopoulos of Greece during a ceremony in Athens on Monday.

For almost two centuries, Greece and Britain have tussled over who should possess the Parthenon Marbles, the crowning prize of timeless beauty and ancient civilization taken from Athens and now displayed at the British Museum in London.

But Greece had an unexpected ally put its finger on the scale on Tuesday, when President Xi Jinping of China expressed support for the return of the works during his first state visit to the country.

Mr. Xi’s support is just one measure of the growing affinity between the countries, underscored by a two-day visit during which their leaders signed 16 new agreements, and China committed millions more in investments in Greece.

On his second day in Athens, Mr. Xi was given a tour of the Acropolis Museum in Athens by President Prokopis Pavlopoulos, who asked for the Chinese leader’s “support in this struggle for the Parthenon sculptures to return here where they belong.”

“I not only agree with you,’’ Mr. Xi replied in comments broadcast on Greek national television. “Not only will you have our support, but we thank you because we, too, have a lot of our sculptures abroad and we try as much we can, as soon as we can for these things to return to their homeland.”

The sculptures are also known as the Elgin Marbles, after the 19th-century British lord who brought the collection to Britain. 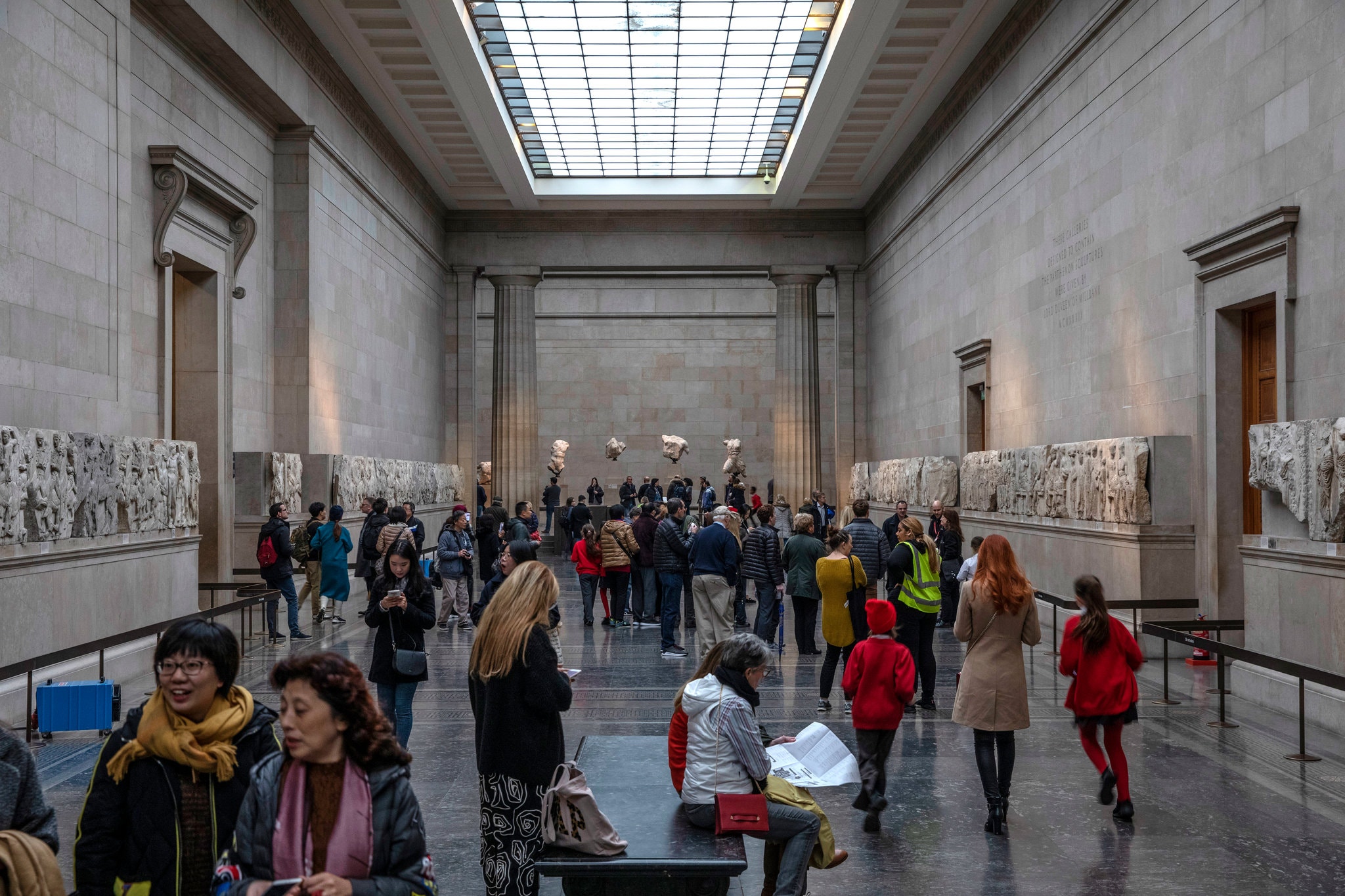 The sculptures, also known as the Elgin Marbles, on display at the British Museum in London.

China has its own longstanding grievances with cultural relics and artworks that were lost when colonial powers dominated China, and Mr. Xi has described himself as a proud defender of his country’s heritage, often referring to its 5,000 years of civilization.

With nationalism on the rise at home, China has stepped up calls in recent years to repatriate its ancient artifacts, even sending teams of researchers to overseas museums to catalog the more than one million Chinese antiquities it estimates are on display abroad.

Over the years, China has successfully wielded its growing economic might to recover a number of artifacts said to have been looted from the Old Summer Palace. Notably, several bronze animal heads are now back in the country after being bought or recovered from their foreign owners by the state-owned China Poly Group Corporation.

On Wednesday, China’s National Cultural Heritage Administration announced that another bronze animal head had been recovered and would be displayed alongside the other repatriated relics in an exhibition at the National Museum of China.

For many Chinese, such artifacts are reminders of what the Chinese Communist Party still calls the country’s “century of humiliation” at the hands of Western powers.

These similarities in their history provided a unifying narrative for Chinese and Greek leaders during Mr. Xi’s visit.

In welcoming Mr. Xi, Prime Minister Kiriakos Mitsotakis said that the Greek and Chinese people are “carriers of great ancient civilizations that sealed the course of humanity.”

Mr. Xi, in an article in the Greek newspaper Kathimerini preceding his visit, wrote: “Confucius and Socrates are two masks that cover the same face: the brightest face of human logic,” borrowing a line from the Greek writer Nikos Kazantzakis. 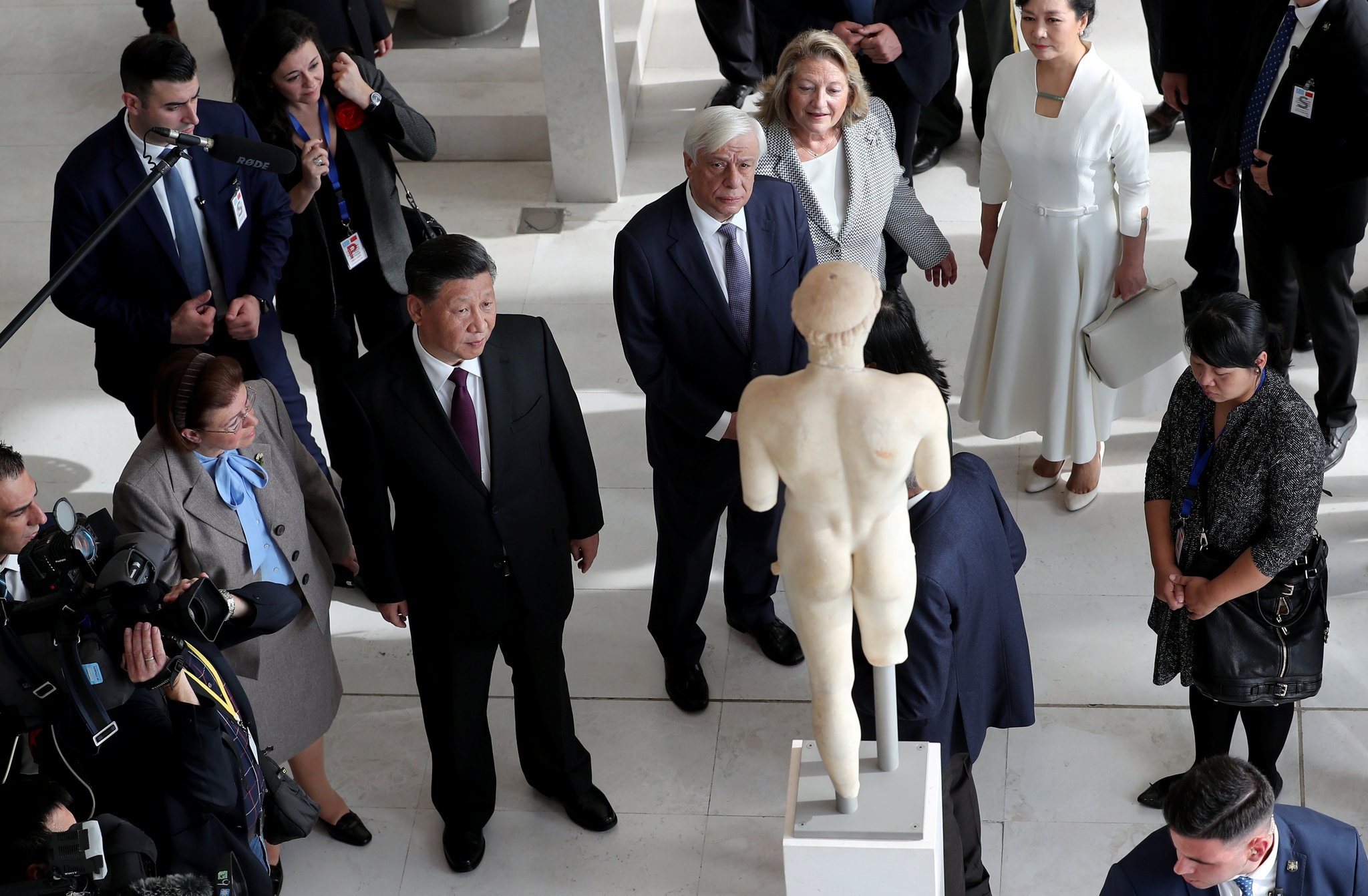 Mr. Pavlopoulos and Mr. Xi at the Acropolis Museum in Athens on Tuesday.

But it is the two countries’ economic ties that have brought them closer in recent years, and Mr. Xi’s visit made clear that Chinese investment was there for the long term.

In 2016, COSCO, the Chinese state-owned shipping group, bought more than half of Piraeus, Greece’s biggest port, turning it into the busiest port in the Mediterranean, according to the port.

On Tuesday Mr. Xi, Mr. Mitsotakis, and the chairman of COSCO and the Piraeus Port Authority oversaw a deal between the port authority and the European Investment Bank, which agreed on a 20-year, 140-million-euro loan for Piraeus’s expansion and upgrade.

Greece’s new center-right government under Mr. Mitsotakis welcomed the Chinese investment as well as China’s huge export market for its agricultural goods, according to experts.

China, in return, experts say, is keen to deepen its influence in NATO and the European Union, of which Greece is part.

“Greece is the one country in ‘old Europe’ that is most open to Chinese investments,” Steve Tsang, the director of the School of Oriental African Studies China Institute, said in an email on Wednesday.

“In a world that is becoming more uncomfortable with Xi’s policy in asserting China, Greece seems like a reassuring, welcoming place for Xi to visit and show his domestic audience how much he is loved by a European country with the oldest civilization,” he said. 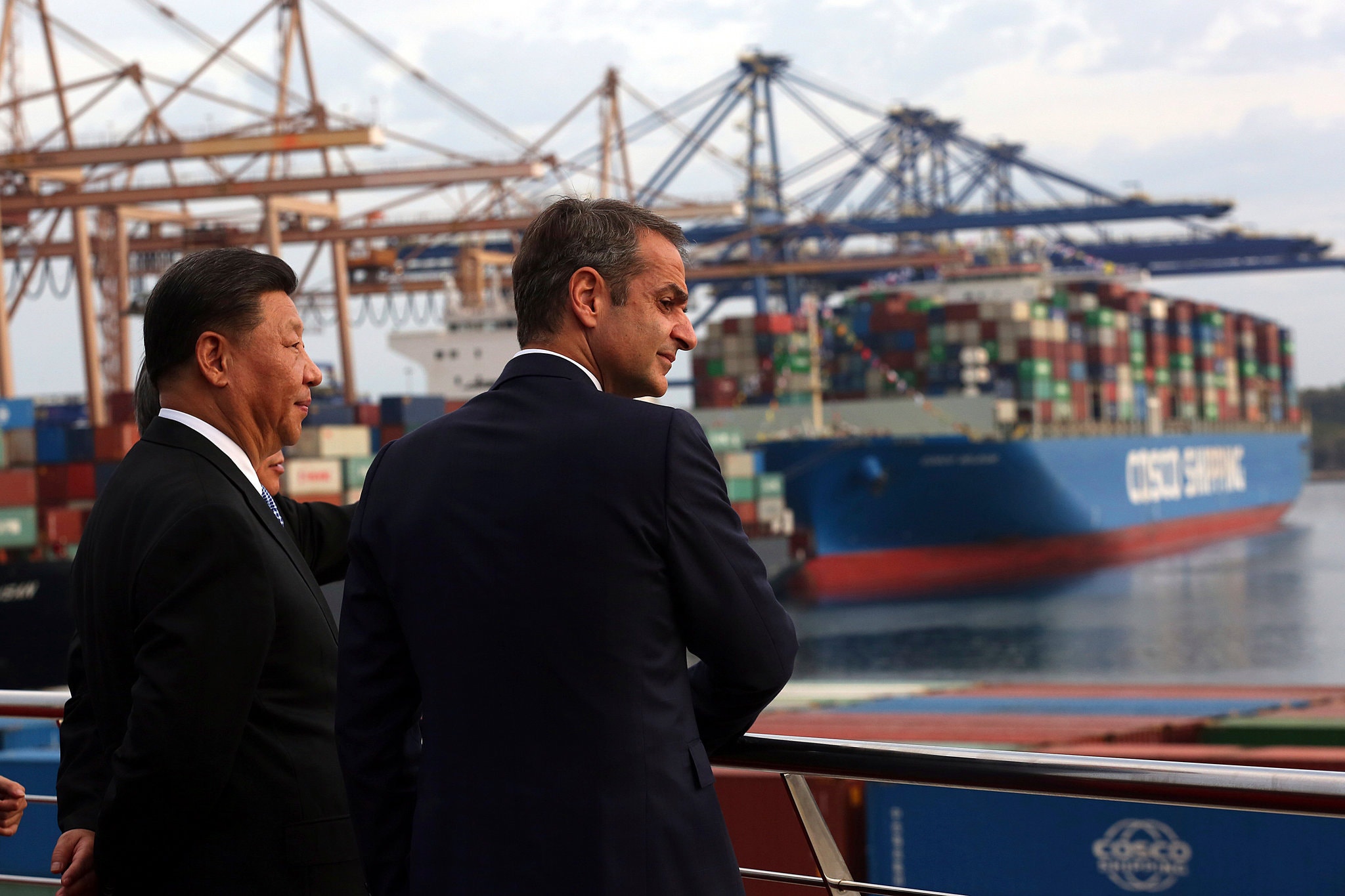 Prime Minister Kyriakos Mitsotakis of Greece with Mr. Xi at the Piraeus port in Athens on Monday.

The Parthenon Marbles include an 80-meter frieze depicting the Great Panathenaia, the ancient Greek feast in honor of the goddess Athena, the muscled body of an ancient Greek river god lounging in midair and voluptuous female figures.

They were obtained by the British Museum after the British Parliament bought them in 1816 from Lord Elgin, who was a British ambassador to the Ottoman Empire when Greece was still a part of it.

Greece argues that Lord Elgin stole the marbles, making the sale illegitimate, and that the artifacts should be returned to their place of origin.

Mr. Xi’s support for the repatriation did not make for one of the official agreements between the two countries.

But Mr. Mitsotakis has made the return of the works one of his administration’s priorities, and raised the issue in his opening remarks to the Chinese president during their official dinner on Monday.

Mark Stephens, a British lawyer who has been advocating for the repatriation of the marbles, called Mr. Xi’s support an “enormous boon.”

“You have a major power weigh in,” he said in a telephone interview on Wednesday.

“It was a very low cost gesture of good will to Greece,” Thanos Dokos, Greece’s alternate national security adviser, said in an email on Wednesday.

For many Greeks, the fact that the Parthenon Marbles remain at the British Museum is a travesty, said Tatiana Flessas, an associate professor of law at the London School of Economics.

“It is a real cause célèbre,” she said by phone on Wednesday, as both sides want “actual ownership” of the marbles.

Neither seems ready to budge.

“The museum’s collections represent the whole world,’’ said Hannah Boulton, a spokeswoman for the British Museum, in a statement on Wednesday. ‘‘It is a unique resource to explore the richness, diversity and complexity of all human history.”

“The Parthenon Sculptures are a vital element in this interconnected world collection,” she said, adding that the museum had “lent objects to various museums, including the Acropolis Museum.”

The Parthenon Sculptures in the British Museum are available for free to six million visitors a year, she added.