April
The Globe and Mail 8 November 2019
By Marsha Lederman 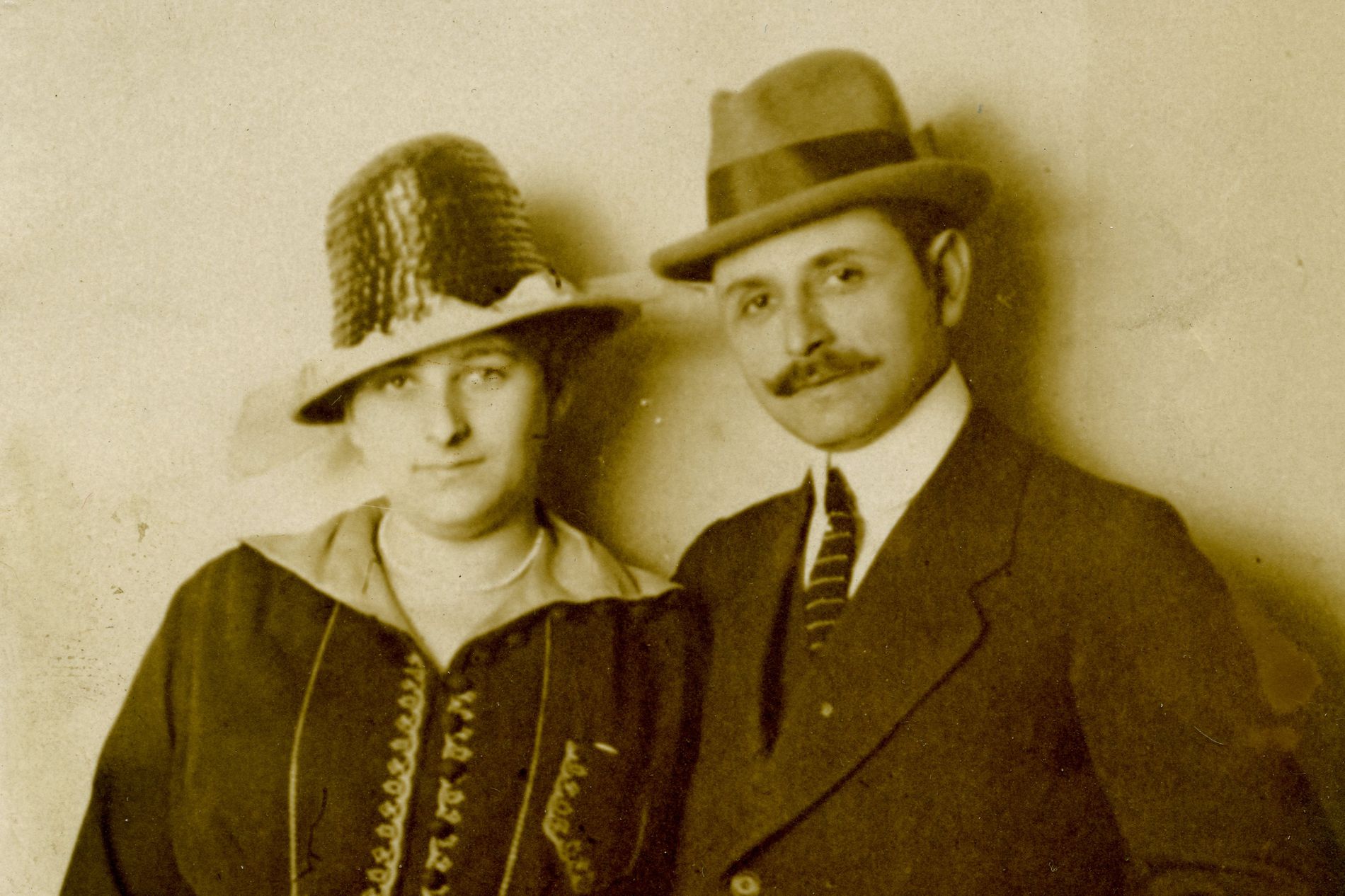 Before the Second World War, Max and Gertrud Hahn of Gttingen, Germany had a Judaica collection that was considered one of the most significant private collections in pre-war Europe, rivalling those of the Rothschild and Sassoon families.

For about 20 years, the boxes sat in the storage room of Michael Hayden’s Vancouver home, unopened. He had found them in a basement room behind the garden of his father’s home in Cape Town, South Africa after his sudden death in 1984. They had been shipped there, originally from Germany and had never been opened by his father either, not since the boxes had arrived after the Second World War. There were about 15 of them, all from the 1940s. The information inside would give Hayden – one of the world’s foremost geneticists – a new purpose in life.

“I could feel the gravity of what was in there,” Hayden, 67, says. “I knew there was going to be a big burden and an obligation to come from opening them. And I wasn’t ready. I think I was fearful too. I knew this was going to be a burden, and a very personal burden.”

Gertrud and Max Raphael Hahn, Hayden’s grandparents, were wealthy residents of Gottingen, Germany, a university city that has been home to dozens of Nobel Prize laureates. Max ran a successful business that included a leather factory and a real estate empire; the Hahns owned about 40 per cent of the buildings in the town. They were prominent members of the Jewish community – Max was president of the synagogue – and deeply patriotic Germans: Max had been a senior procurement official for the German army during the First World War. And they were great collectors – of art, fine furniture, antiques – and a collection of Judaica that is said to have rivalled those of the Rothschilds and Sassoons.

At about 2 a.m. on Nov. 10, 1938, Nazis armed with axes broke into the Hahn home, smashing doors and windows, destroying their belongings and forcing Max and Gertrud half-naked into the street, while bystanders hissed and yelled, calling them “filthy Jews” and “pig Jews.” Their home was ransacked and many of their possessions were stolen.

This horrific night became known as Kristallnacht – the night of broken glass – a government-sanctioned series of Nazi pogroms in Germany and Austria that saw hundreds of synagogues burned, Jewish businesses destroyed and Jewish cemeteries desecrated. There were dozens or hundreds of deaths (the number is disputed) and some 30,000 Jewish men sent to prisons and concentration camps.

Max was one of them.

He was sent to jail for nearly nine months, during which much of his property, including his silver Judaica collection, was confiscated. The family also sold possessions to the local museum, under duress, as they were stripped of their wealth and livelihood.

Even while in prison, Max worked for the return of his prized Judaica items, thinking they could help fund the family’s future life somewhere outside Germany. He was not successful.

There were more pressing concerns. In 1939, the Hahns managed to get their children, Rudolf and Hanni, 19 and 17, to safety in England. In early 1941, they shipped some precious items that remained, including a piano and violin, and many documents to Sweden and Switzerland for safe storage in neutral countries.

By the time Max and Gertrud tried to leave Germany themselves, later that year, it was too late. In December, 1941, they were deported by train to a concentration camp in Riga, Latvia. Gertrud, who was diabetic and without her medication, may have died on the way in the cattle cars. It’s believed Max was shot in the Bikernieki Forest in March, 1942, and buried in a mass grave, like thousands of other murder victims. No records of their deaths exist.

Michael Hayden grew up without grandparents. He had a vague notion that they had been killed during the Second World War, but he knew no details about their deaths and very little about them.

Those boxes, left unopened for all those years, held answers to questions he didn’t know he had. One night in the mid-2000s, at around 3 a.m., he went down the stairs of his Vancouver home and started opening them. He’s not sure what compelled him that night. Was it his state of mind? Was he ready to confront the past? Did his curiosity finally win out over his fear? In any case, he felt ready to know more.

The containers held thousands of documents that painted a rare and urgent picture of life in Nazi Germany for a prominent Jewish family – his own.

Inside, Hayden found about 50 letters sent during the war between Max and Rudolf; petitions that Max had submitted in response to anti-Semitic laws enacted by the Nazis; and photographs and lists of the art and other objects that had been stolen from the Hahns or sold under duress while under Nazi rule.

Hayden, who doesn’t speak German, hired a historian who is fluent in the language to help him deal with the contents. The documents were a treasure trove of information about his family, but they also contained clues – and evidence – about his grandparents’ stolen property.

That’s when he decided he would search for it.

The first time Hayden visited Gottingen, it was long before he knew about the boxes – or much of anything about his father’s life. He was in his 30s, travelling with his father. They visited a childhood friend of Rudolf’s, who was very welcoming. It was the first time Michael had ever heard his father speak German. The man brought out a photo album from their shared childhoods. There they were as kids. Then, a few pages in, there was a photo of his father’s friend, in an SS uniform.

Since opening the boxes, Hayden has been working with the Gottingen Museum and other German institutions for several years, looking for what is left of his family’s treasures. There have been a lot of obstacles – restitution can be a fraught endeavour – but a few dozen items have been identified as having belonged to the Hahns. Last year, in a moving ceremony, the first of these treasures was returned – a remarkable silver gilt kiddush cup – one of very few items of Judaica seized by the Nazis that had not been melted down for the precious metal. The cup was discovered in a basement vault at a Hamburg museum in 2018 and returned to the family last November.

“I felt a sense of great triumph and justice,” Hayden says. “It was a great occasion to restore that and to give some respect to [my grandfather] and an item that I knew he loved and he must have handled.” 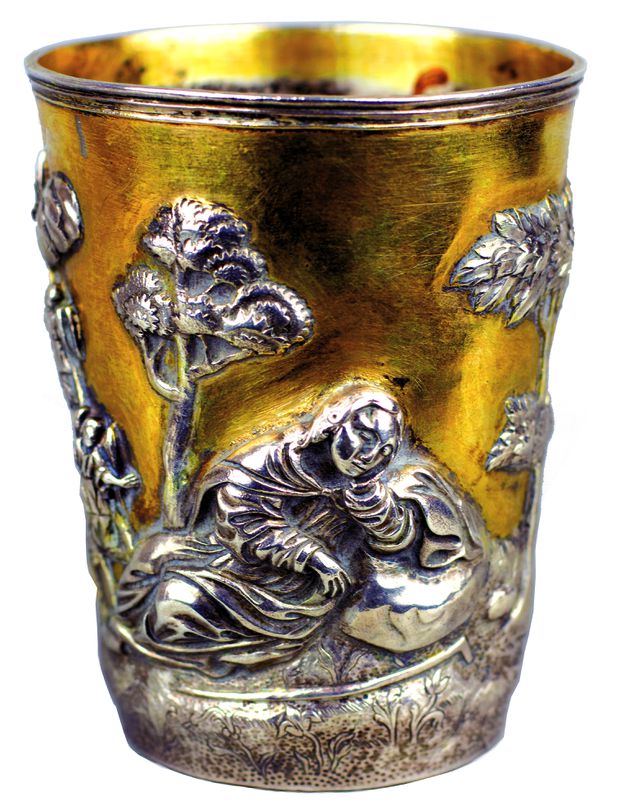 In three-dimensional silver, the cup depicts three scenes from the biblical story of Jacob. The date of its carving, 1757, is engraved on the base. There’s a rude red number splashed next to it, assigned by one of its Nazi thieves.

This is one of the items being displayed for the first time at an exhibition that opened on Friday at the Vancouver Holocaust Education Centre. Treasured Belongings: The Hahn Family and the Search for a Stolen Legacy includes many extraordinary items that belonged to the Hahns, including a 17th-century Passover Haggadah and precious secular art, such as an original work by the artist Max Liebermann.

The museum was interested in creating the exhibition not just because of the Hahns’ compelling, tragic story, but also because of the contemporary resonance. Their story is a lens through which to view reconciliation and repatriation in the aftermath of catastrophic injustice.

The show also includes historical context, as well as family photographs and original letters. In one, written right after Kristallnacht – Nov. 11, 1938 – Rudolf, writing from Hamburg, tries to comfort and encourage his mother back in Gottingen. He ends it with a quote. “We will not let this get us down!”

Michael Hayden is a world-renowned medical researcher who has accumulated many titles and accolades over the course of his career. He is the founder and director emeritus of the Centre for Molecular Medicine and Therapeutics at the Department of Medical Genetics at BC Children’s Hospital and the University of British Columbia, and Killam Professor and Canada Research Chair in Human Genetics and Molecular Medicine. He is one of the world’s leading experts on Huntington’s disease. He has been named to the Order of Canada, the Order of British Columbia and the Canadian Medical Hall of Fame, as well as many other honours. When I asked him about if he has unwittingly inherited characteristics from the grandparents he never knew, he paused and then said yes.

“And some of it is deeply comforting. Because I’m a deep collector and partly what I’ve done, in the eighties I started collecting DNA and body parts from patients who died of certain genetic diseases. And I did it very methodically. Today we have the largest DNA bank and organ bank in the world that is supporting global research into Huntington disease.”

He also collects other things – including, similar to his grandfather, Haggadot (the books used during the Passover Seder).

What motivates Hayden’s quest for his family’s belongings is not financial restitution – or even the lost items themselves. He was eager to learn about Max and Gertrud and illuminate their identities, their individuality.

“I’m really driven from a perspective of wanting to rescue my grandparents from obscurity and wanting to restore them to their particularity and distinctiveness and to rescue them from complete anonymity,” he says.

“These were just two of six million, my grandparents, but for me I wanted to get away from generalizations. … I’m really just trying to understand: What’s the genetic legacy? What’s the legacy of courage and personality? Who were these people? And giving them a face.

“That’s what’s driving me. And somehow it’s also a search for who I am.”

Treasured Belongings: The Hahn Family and the Search for a Stolen Legacy is at the Vancouver Holocaust Education Centre until Nov 27, 2020.