When the federal government recently announced that a painting stolen by the Nazis in 1933 from the family of a Berlin publishing tycoon had been recovered from the Arkell Museum in upstate New York, Anna Marley, curator at the Pennsylvania Academy of the Fine Arts, did a double take.

Yes, she was interested that Winter, by American Gari Melchers, was among roughly 1,200 artworks acquired by the leftist Jewish publisher Rudolf Mosse that the Nazis seized from his descendants. His collection may have been the first art stolen from Germany’s Jews by the Nazis.

Yes, she wondered how the painting made its way to a museum in Canajoharie, northwest of Albany. And, yes, she was interested that recovery and restitution efforts on behalf of the Mosse descendants were underway, more than 80 years after the artwork left Germany.

But there was something else. The painting bore a striking resemblance to a remarkable painting in PAFA’s permanent collection — Melchers’ Skaters, purchased by the academy in 1901 in the Netherlands, probably by PAFA’s director at the time, Harrison Morris.

“'Gosh,'" she said she thought to herself, “'that looks just like our painting, but it’s not quite the same. This is strange.'"

This undated image taken from evidence filed in a forfeiture case in the U.S. District Court for the Northern District of New York, is of the painting often titled "Winter," by the artist Gari Melchers. The painting, stolen by the Nazis in 1933, was recovered by the FBI from a collection at the Arkell Museum in Canajoharie, N.Y.

She first thought the PAFA version, which has a clear history of ownership and has never been in Nazi hands, must be a copy. The image depicts a young man and woman, older than adolescents but not that much older, walking through a brisk Dutch winter landscape. They’re carrying ice skates, and the young woman has a skating stick — she’s supposed to keep hold of it to avoid any outdoor hanky-panky.

The PAFA image, which is on view in the Furness building at Broad and Cherry Streets, is an oil, about 3½ feet high. The woman is wearing a brilliant purple cloak, and her partner, who is turned toward her so that his gaze passes out toward the viewer, wears a dark green jacket with his skates tossed over the shoulder.

The colors in the Arkell’s Winter are different, and both figures look straight ahead, as though embarrassed to be seen together by the museum visitor.

The Arkell’s painting, which is rendered in pastel, not oil, shines a light not just on Nazis and their almost immediate campaign to hound leftists, Jews, and the media; it also draws attention to PAFA’s Skaters — a painting Marley considers one of the museum’s treasures and one whose acquisition points to a great period for the institution at the turn of the 19th century.

The Mosses and the Nazis

According to court papers filed in U.S. District Court for the Northern District of New York, Mosse bought Winter directly from Melchers at the Great Berlin Art Exposition of 1900.

After Mosse’s death in 1920, his collection, including Winter, eventually passed to Felicia Lachmann-Mosse, Mosse’s adopted daughter, and her husband, Hans Lachmann-Mosse, who operated the family publishing empire. 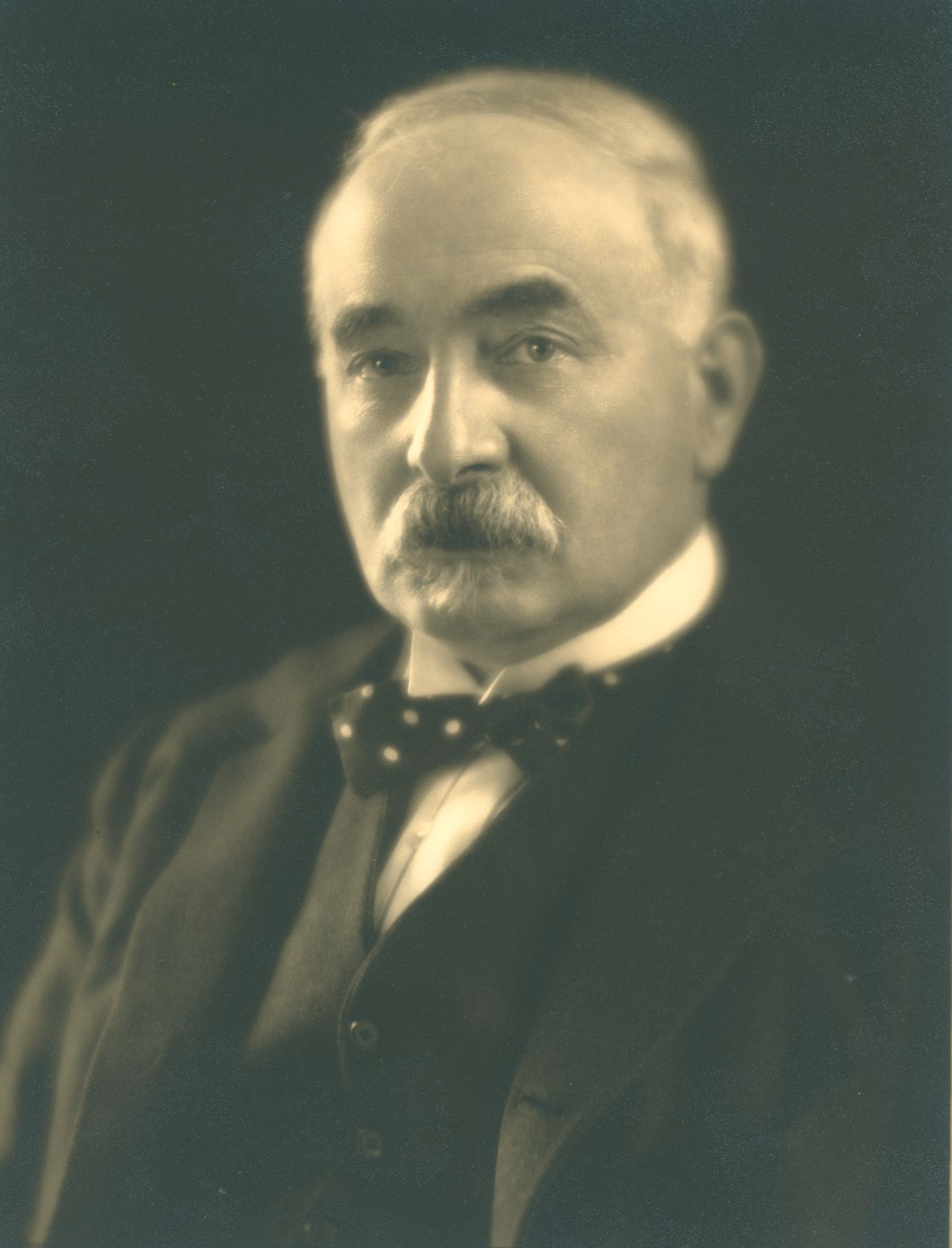 Nazi officials, angered over the highly critical Mosse newspaper Berliner Tageblatt, harassed and persecuted the family, finally forcing the Mosses to relinquish all their possessions and flee Germany.

The collection was inventoried and put up for sale by the Rudolph Lepke Auction House in 1934, where it was acquired by an “unknown purchaser” for 1100 Reichsmarks. The painting then turned up in October 1934 at the Macbeth Gallery in New York City, where it was purchased by Bartlett Arkell, co-founder and president of the Beech-Nut Packing Co., of chewing gum and baby food fame.

Arkell, in turn, donated the painting to his museum.

Was he aware of the painting’s theft from its rightful owners?

“It’s unclear that Arkell would have known,” said J. Eric Bartko, who manages the Mosse Art Restitution Project, an international effort to track down the looted collection.

The Mosse project alerted the FBI to the presence of the painting around the holidays in 2017 after a Mosse researcher saw an image of the Melchers work posted on the museum’s Facebook page.

“That was the deep Sherlock Holmes and Dr. Watson research,” Bartko said.

The mystery of the twins

Marley, PAFA’s curator of historical American art, finds all of this interesting. But it doesn’t speak to the immediate question of the two nearly identical paintings. Marley said that Skaters, at PAFA, was acquired during a strong period of growth in the museum’s holdings of then-contemporary art.

Skaters, she said, was likely painted in 1892. It then appeared to considerable acclaim at the 1893 Columbian Exposition in Chicago and in exhibitions that year in Dresden and Hamburg. In 1894 it was shown in Paris. In 1895 it went to Munich. In 1897 it appeared in Philadelphia and Copenhagen, and in 1900 it was back in Chicago.

The academy acquired it in 1901 with Joseph E. Temple Fund money — the same funds used to acquire Henry Ossawa Tanner’s Nicodemus the year before and Winslow Homer’s The Fox Hunt a few years before that. 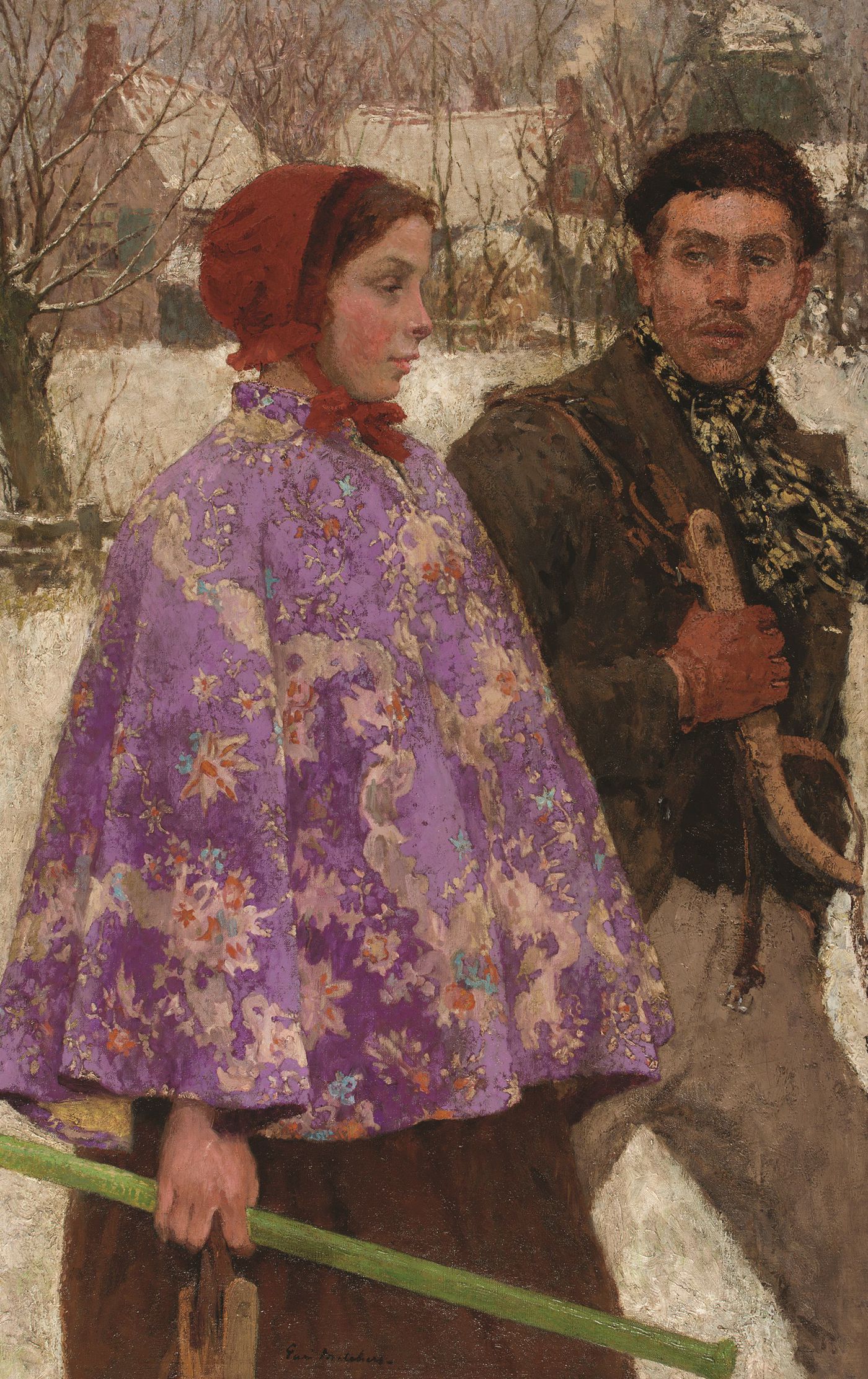 PAFA director Morris operated at a time when Philadelphia was an important part of the international art network that flourished in Paris, Dresden, Berlin, and other cultural centers around Europe.

“Harrison Morris at this time was always trying to get the best of the Paris salons,” Marley said. Melchers’ Skaters fit that bill, and because of its wide exposure, many Melchers fans would have seen it and perhaps suggested that the artist do another version.

Joanna Catron, assistant director and curator of the Gari Melchers Home and Studio in Falmouth, Va., said Winter, from the Arkell, was not the only version of the painting. Melchers apparently served as his own inspiration more than once.

“He was known to copy or crib from himself multiple times — anything to pay the rent,” Catron said. "I think this was an instance of, ‘Well, this is so successful, I think I’ll try it in pastel.’ We have a pastel version of the PAFA.”

The Melchers Home and Studio holdings in Virginia include an exact pastel copy of PAFA’s Skaters.

“Our pastel is much closer to PAFA’s” than the Arkell version, said Catron, though not as “impressive” as the PAFA oil. 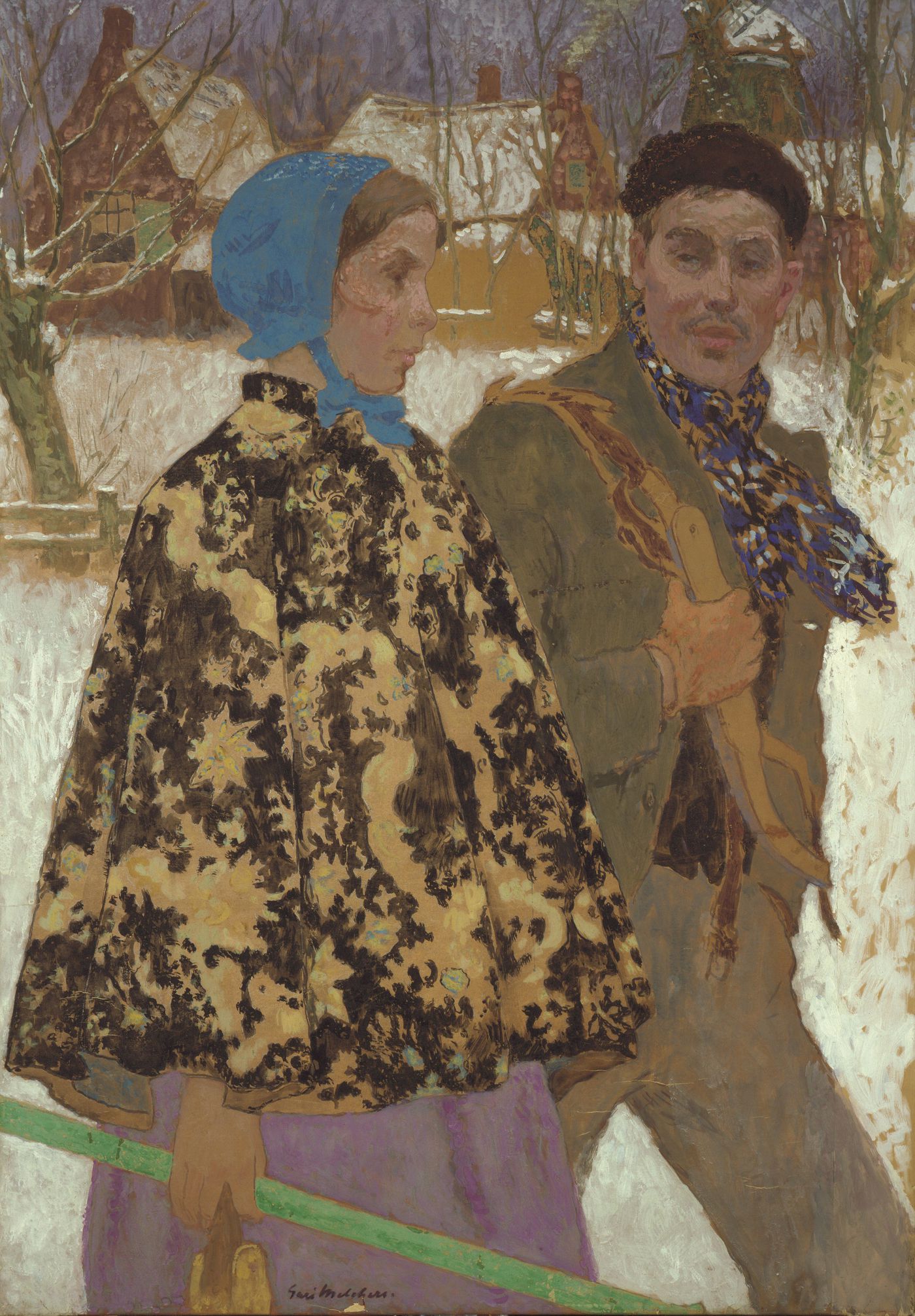 "Skaters," executed by Gari Melchers, a pastel copy of his PAFA "Skaters" owned by the Gary Melchers Home and Studio in Virginia.

In an email, Catron elaborated: “I think it was painted as a spec piece but didn’t sell, which is why it is still with us. ... We are very glad to have it, though. I will assume, because it was worked up on very thin tissue/tracing paper mounted on board, that [Melchers] traced it from the original PAFA version.”

There are etchings, too. Melchers tried his hand at etching and made several Skaters-like images. He sold them or gave them to friends.

“He did do several versions,” Catron said. “It was so successful.”

Winter, impounded by the FBI, remains in storage awaiting the claim of the Mosse descendants. PAFA’s Skaters is on view at the academy, at Broad and Cherry Streets.