CANAJOHARIE — A painting stolen by Nazis in 1933 from the descendants of a German publisher and philanthropist was confiscated recently by the FBI from the Arkell Museum in Canajoharie.

The recovery is part of an international effort based in Germany to recover plundered artwork that was lost after the Nazis ascended to power and many Jewish families fled Germany.

The painting, "Winter," by American artist Gari Melchers, was acquired from the Great Berlin Art Exhibition in 1900 by Rudolf Mosse, who died in 1920 and was founder of a company that published various periodicals in the early 20th century, according to federal court records. 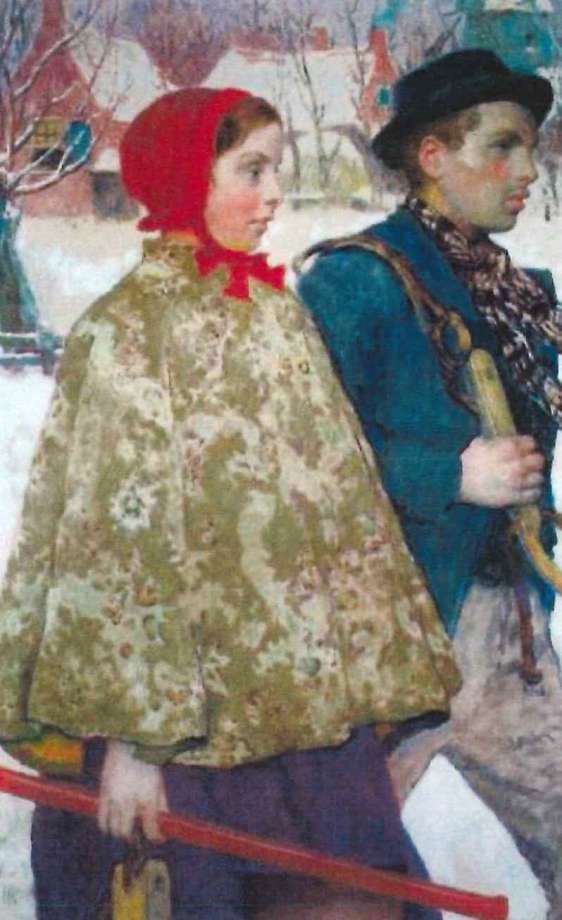 "Winter," by artist Gari Melchers, was purchased from the Macbeth Art Gallery in New York City in 1934 by Bartlett Arkell, president of the Beechnut Packing Co. in Canajoharie and founder of the art museum

One of Mosse's periodicals, Berliner Tageblatt, was critical of the Nazi party and Adolf Hitler seized the publishing company, persecuting the Mosse family because of their Jewish heritage and affiliation with the company.

Mosse's family members, Felicia and Hans Lachmann Mosse, fled Germany in early 1933 and left behind their family's vast art collection, which was placed under state administration, according to federal prosecutors.

"The Nazis commissioned Karl Haberstock of the Rudolf Lepke auction house, to liquidate the Mosse family's art collection," according to forfeiture documents filed by the U.S. attorney's office.

An FBI unit based in New York City that has expertise in rare artwork helped special agents in Albany secure the painting in a special storage crate that will protect it from damage due to atmospheric conditions such as humidity changes. The painting is being kept at the FBI's Albany office until it can be reunited with the Mosse family.

In May 1934, an "unknown purchaser" bought the painting from an auction house and five months later it turned up at the MacBeth Art Gallery in New York City. Federal prosecutors said the Mosse family never received compensation for the stolen painting. Federal prosecutors characterized the Nazis' "legal process of dispossessing the Mosse family of its property (as) ... a charade."

There is no indication of any wrongdoing in the acquisition of the painting by Bartlett Arkell, who was co-founder and president of the Beechnut Packing Co. formerly headquartered in Canajoharie. He purchased the painting from the Macbeth Art Gallery in 1934, one of thousands of art pieces from around the world that he acquired for his personal collection.

The Arkell Museum, which holds an art collection established by Arkell, underwent a $10.5 million renovation in 2007 and has been a popular destination dating back decades. The gallery, which is part of the Canajoharie Library, was added three years after the library's founding in 1924 and has a collection that includes at least 21 works by Winslow Homer.

Suzan D. Friedlander, the museum's executive director and chief curator, said the museum "was of course very upset to learn the history of the painting's seizure from the Mosse family by the Nazis in 1933 and its subsequent sale at the Lepke Auction in 1934. We fully support the work of the Mosse Art Research Initiative and other efforts, and willingly turned over the painting to the FBI, waiving all right, title, and interest in the painting."

Court records indicate the FBI seized the painting in Canajoharie on Sept 10, and that Charles J. Tallent, a trustee for the museum, signed a document along with Friedlander waiving any right to the artwork.

Tallent said that Arkell had purchased the painting from an art dealer at the Macbeth Gallery in New York City, but it's unclear how that dealer had come to possess the artwork.

"The Macbeth Gallery was a popular gallery where Mr. Arkell purchased a number of his paintings that he eventually donated to the Arkell Museum," Tallent said. "The painting was with the museum since 1934, until it was reclaimed by the Mosse family."

The effort to recover the Mosse heirs' artworks took shape in 2017 when they partnered with the Free University of Berlin and founded the Mosse Art Research Initiative.

For the first time, German institutions are cooperating with descendants of Nazi persecution in a public-private partnership," the initiative's website states.

According to the National Gallery of Art, Gari Melchers, the son of a German immigrant who was also an artist, was born in Detroit in 1860 and studied painting abroad, including in Dusseldorf and Paris. The gallery's website said that Melchers preferred "scenes of rural life."

Melchers, according to the National Gallery, was commissioned to paint murals for the Missouri state Capitol and the Library of Congress. After leaving Europe just prior to the U.S. entrance into World War I, the artist and his wife settled in Fredericksburg, Va., and he also spent time at a New York studio.