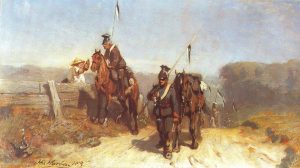 The recent case before the German Advisory Commission involving the painting Uhlans on the March by Hans von Marées was a first of its kind on a number of counts. The Commission is the body that hears claims for the restitution of Nazi-looted artworks. The claim had been brought in 2017 by the beneficiaries of the estate of a former Jewish art dealer operating in Germany in the 1930s named Max Stern. The Stern beneficiaries consist of three universities (McGill and Concordia Universities in Montreal and the Hebrew University of Jerusalem) and have been represented by the Max Stern Art Restitution Project since 2002. The beneficiaries have so far recovered about 20 of approximately 200 works once belonging to Stern’s dealership.

The particular painting at issue here, Uhlans on the March (right), was being claimed against the Bavarian State Gallery in Munich, where the painting had ended up after the war. The claimants argued that this was a painting Stern had sold in June 1936, a transaction which the claimants equated to a forced sale. Stern’s records showed that at that time a von Marées painting had been sold, amongst others, to a buyer named Daniel Wermecke. The Bavarian Gallery, in its defence, argued that the 1936 sale was not the result of persecution but was rather part of the ‘normal business dealings’ of the Stern Gallery.

While at first there was some question as to whether the von Marées sold in 1936 was in fact Uhlans on the March, by the time of the hearing the Commission had accepted that it indeed had been the same work.

A majority of the Advisory Commission accepted the claim of the Stern beneficiaries. The main question to determine was whether the sale had been the result of Stern’s persecution by the Nazis. Things were pretty dire for the Stern Gallery by 1936: art professionals had become strictly regulated by the Nazi-controlled Reich Chamber of Fine Art since 1933 and the infamous Nuremburg Laws which deprived Jews of German citizenship were passed in 1935; Stern’s art dealing permit had also been revoked by the Reich Chamber in August 1935 (he had appealed the decision, but would find out a month after the sale, in July 1936, that the appeal had failed, a foregone conclusion knowing as we do the ultimate direction taken by Nazi Germany). It was difficult to see, in this situation, how the sale of the von Marées was anything but involuntary.

The recommendation as to the work itself, however, was unexpected. The Commission was uncertain whether Stern, or indeed his Gallery, had actually owned the work prior to the sale. In fact, according to the Commission, there was a ‘high probability’ that the work had been consigned by a third party, possibly even by another victim of the Nazi regime. Because the identity of the true owner was not entirely clear, the Commission wanted to leave open the possibility that someone with a better claim to the painting than the Stern beneficiaries may come forward. This might, in theory, be heirs of a Jewish owner who had consigned the work through the Stern Gallery. As a result, even though the painting was restituted to the Stern beneficiaries, they have been prevented by the Commission from selling the work for ten years, in order to permit other potential claimants to come forward.

The other unusual aspect of the decision was the inclusion of a dissenting opinion. This is not only the first time this has happened for the German Commission but, to my knowledge, the first time it has happened for any of the restitution committees in Europe (along with Germany, committees exist in Austria, the Netherlands, France and the UK). The reasoning in the dissent, printed alongside the majority decision, was that the 1936 transaction did not qualify as a ‘forced sale’. Although the dissent admitted that a sale by a Jewish dealer after the 1935 passage of the Nuremburg Laws should be presumed to be caused by Nazi persecution, such a presumption can be rebutted if there is proof that the seller obtained a reasonable purchase price that could be disposed of freely, essentially meaning that the transaction would have occurred regardless of the Nazi regime.

In this case, according to the dissent, the evidence showed that the price at which the von Marées had been sold was arguably consistent with the market price of the time. There was apparently no evidence in Stern’s memoirs and elsewhere that he was not allowed to keep the proceeds from this particular sale. Thus it was concluded by the dissent not to be a ‘forced sale’.

The existence of a dissent goes to show just how divided opinion can be on the question of ‘forced sales’. If a sale occurred where a reasonably fair price had been obtained by the seller, could that alone be enough to constitute a freely undertaken sale? This appears to be part of the logic of the dissenting opinion. It is clear that the 1936 sale is somewhat less egregious than the major auction sale of the Stern Gallery holdings at Lempertz Auction House the following year. This was a forced auction of over 200 works following an order from the Reich Chamber that the Gallery’s inventory was to be liquidated. Stern himself would flee Germany for France a month following the auction.

In comparison to this auction the individual sale of the von Marées a year earlier may appear less ‘forced’. However, each transaction (whether forced or otherwise) must be judged on its own merits. As the majority decision here shows, there were a number of factors that would lead a reasonable observer to think that the persecution and pressure on dealers like Stern had become unbearable, thus negating any voluntariness in relation to the sale. And so the majority recommended restitution of a sort – but with a ten-year safety net.