The Netherlands and the Holocaust

During WW II, the train systems of occupied countries were critical in carrying out the Nazi’s “Final Solution" regarding the Jews. The Dutch railroad system, Nederlandse Spoorwegen (NS), deported 107,000 Jews during the Nazi occupation, of whom 5,100 survived. A new Dutch book on the railroad in wartime states that 112 Dutch trains deported Jews from the main transit camp Westerbork, originally a prewar refugee camp, in the northeast Netherlands, to Nazi camps between June 1942 and August 1944. As in France, the railroad was paid a small amount by the Nazis for the transport to the German border where the Dutch crew was replaced by a German one. The trains, as Adolf Eichmann remarked, ran “smoothly,” and there was no sabotage revealed, if any was attempted.

The railroads got payment for each person carried on its cattle cars to their death.

In 1940 about 140,000 Jews, seemingly well integrated, lived in the Netherlands, including 75,000 in Amsterdam.  The Netherlands had the largest proportion of its Jewish population, 76%, exterminated by the Nazis than any other Western European country.  Less than 25% of Jews survived.  One of those who died was Anne Frank who was deported first to Auschwitz and then to Bergen-Belsen, where she died from typhus on March 1, 1945.

Despite this sad record, the Netherlands was not a country of Nazi collaborators. Yad Vashem in Israel lists 5,778 Dutch among the “Righteous among the Nations,” a figure second only to the Poles with 6,992 honored. Nevertheless, explanations have been offered for the large proportion of Jews killed. Among them are the strong Nazis occupation; the efficient and effective Dutch bureaucracy in carrying out orders; the collaboration of Dutch police, the segmentation and pillarization, of Dutch society; the complacency of many of the Dutch population; the lack of a unified Jewish community; the geography of the country that made escape difficult.

The strongest factor was tight Nazi control after it invaded the Netherlands on May 10, 1940 and bombed Rotterdam four days later. SS Reich Commissioner Arthur Seyss-Inquart, a fervent anti-Semite, who answered directly to Adolf Hitler.  At the Nuremburg trial, Seyss-Inquart was found guilty of war crimes and crimes against humanity, and executed on October 16, 1946. He controlled a very efficient administration under which 8.5 million Dutch suffered 198,000 deaths, over half of which wereJews, who comprised only 1.6% of the total population. 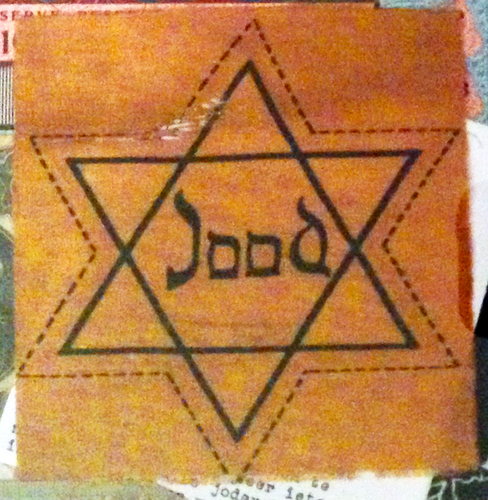 Jewish newspapers were closed, Jewish students were expelled from schools and universities, Jews were banned from the civil service, and had to wear the yellow star.  They were segregated and 15,000 were put in forced labor camps. All Jews had to register with a local census office. Anne Frank told us, “Night after night, green and gray military vehicles cruise the streets.” Everything of value was taken, and Jewish-owned businesses and real estate were either “administered” or sold under duress and at bargain prices.

The Nazis in February 1941 selected a Jewish Council, Joodse Raad, to be responsible for all matters concerning the Jewish community.  Like all other Nazi-appointed Jewish groups, its record is controversial, with accusations of collaboration.  In May 1943, the Raad, after internal debate, agreed to provide the Nazis with the list of 7,000 names of Jews they wanted. These Jews and others were sent to the extermination camps. In the Dutch pavilion at Auschwitz there is a wall of names of 57,000 Jews murdered there. A Dutch Holocaust museum of names, designed by Daniel Libeskind, is to be built, but it has been delayed. The Dutch railroad officially apologized in 2005 for its actions during the occupation and agreed to pay compensation to survivors of the Holocaust.

The Dutch government in March 2016 announced it would resume monthly compensation payments to Dutch Holocaust survivors living in Israel. It had stopped payments in February claiming the survivors, about 600 in Israel, should be supported by Israel, and there should be no double payment.

There are disputes, even in Israel, over disposition of the artworks owned by Jews, and taken or stolen by the Nazis. This is true of the Netherlands as in other Western European countries. To illustrate the problem, the city of Deventer in summer 2019 hosted an exhibition of art stolen from Jews during the Holocaust.  The exhibition, held in Bergkerk Cathedral, showed 75 works of art.  Much of the art taken from Jews is in warehouses or museums in the country. Looted works of art were deposited in the Lippmann, Rosenthal & Co. (LIRO) bank, a Jewish-owned bank which became a Nazi agency specializing in theft, and then sold them on the art market. Dutch museums, including the Rijksmuseum, bought some of these works. This was part of the well-organized Nazi looting which took many forms, including promotion of the illegal black market and manipulation of international banking and currency exchanges.  All objects of value. Jewels, gold coins. antiques, paintings, stamp collections, deeds to real property, were placed for “safety” in the LIRO Bank. Every object was itemized and its value noted, and eventually the names of those who had obtained the plundered items were made known.

The Netherlands, like other European countries, is struggling with the dilemma of stolen Jewish property. According to Avraham Roet, a retired Israeli of Dutch origin, Dutch museums, including the Rijksmuseum and the Stedelijk museum in Amsterdam, appear to have at least 170 works of art stolen from Jews. The investigation of the provenance of collections was only started in 2009. The most well-known case is that of the Goudstikker collection of over 1,113 paintings sold for a trifle to the Nazis, almost all to Hermann Goering.  After a number of court cases, in 2006 the collection was finally returned to the heirs of Goudstikker, who had died in 1940, and then sold.

The courts and the Dutch Restitution Committee have intervened in a number of controversial cases concerning art needing jurisdiction.  To some extent they have adopted a “weighted interest” attitude to looted art, the argument that stolen arts belongs in museums where the public has access to it, not to the family that owned it. Thus, a claim for a Bernardo Strozzi painting was rejected in 2013, and in a recent case in 2019 the court refused to return a valuable Kandinsky painting hanging in the Stedelijk Museum in Amsterdam to the owner because it has “public interest.” The English expert on looted art, Anne Webber, has been critical of the policy of the courts that present ownership of looted art outweighs rightful ownership.  It is an open question whether the significance of a work of art in public art collections is more meaningful than the rightful and valid case for the Jewish claim for recovery of stolen property.