The Great Art Stolen by Hitler

HITLER’S LAST HOSTAGES
Looted Art and the Soul of the Third Reich
By Mary M. Lane 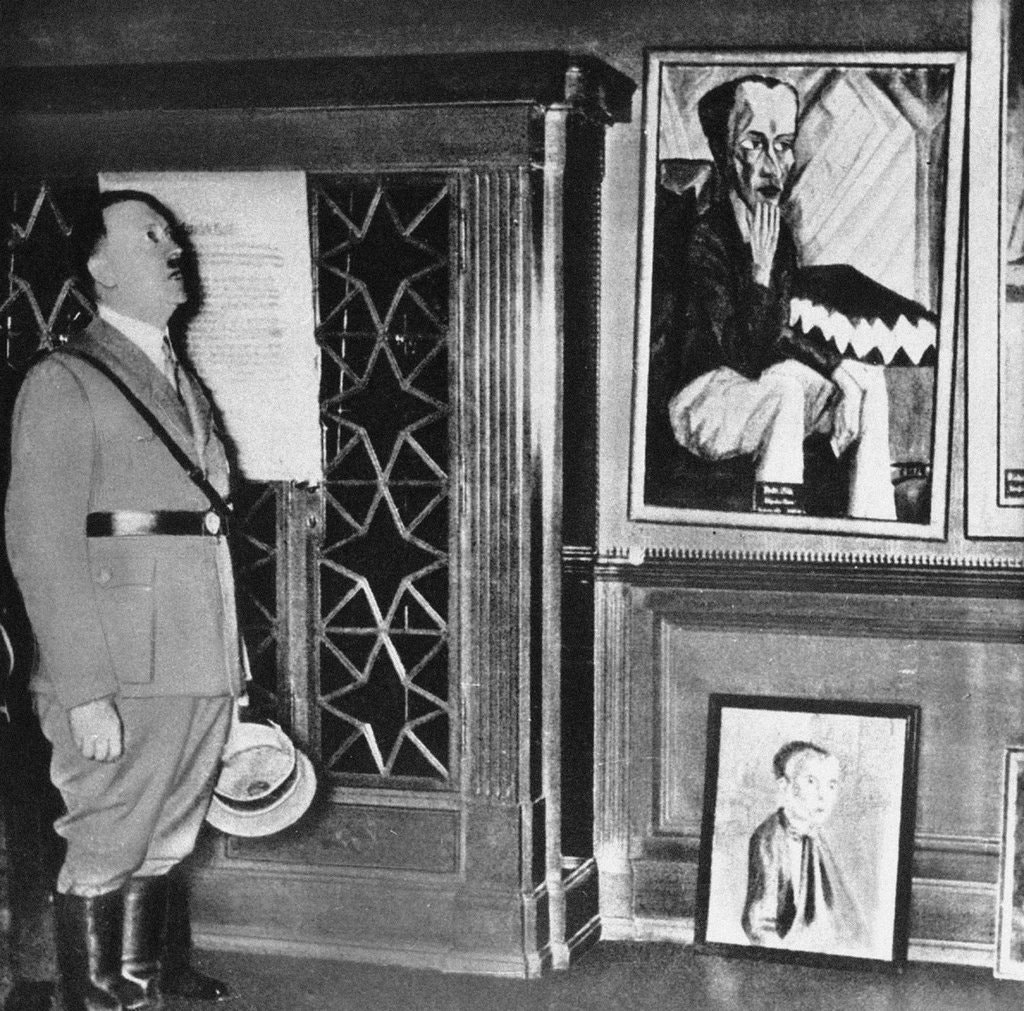 Adolf Hitler visits an exhibit of “degenerate art” in 1935

In 2012, German authorities broke into a Munich apartment belonging to a reclusive octogenarian named Cornelius Gurlitt. Inside, they found approximately 1,200 works of superlative art, by artists including Renoir, Picasso, Matisse and Degas. Gurlitt had drawn suspicion in 2010 when he had been stopped on a train from Switzerland to Munich carrying 9,000 euros in cash — an amount below the legal requirement for declaration, but enough to raise concerns of money laundering. Following up, the German police discovered that Gurlitt was selling artworks without paying taxes. In response, they confiscated his collection and opened an investigation.

For almost two years, German authorities kept the discovery of Gurlitt’s stash confidential. They saw no need to share the information publicly as they considered it, at least officially, a routine case of tax evasion. What they could easily have guessed if they had done a simple Google search (as one young officer did) was that Gurlitt’s trove was a collection of works that had been confiscated, looted or bought under dubious circumstances during the Nazi regime. Gurlitt’s father, Hildebrand, had served as part of a small but powerful cabal of art dealers, working directly on behalf of the Führer, on a dual mission: to sell works of “degenerate art” to benefit the Nazi war machine, and to establish a world-class museum of “great German art” in Hitler’s hometown of Linz. In the chaotic aftermath of World War II, Hildebrand Gurlitt was able to convince the authorities he had done nothing untoward. As a result, he was never brought to justice and was allowed to keep his collection, which he then bequeathed to his children, Cornelius and Benita.

Mary M. Lane was working for The Wall Street Journal when a German magazine broke the news of the Gurlitt discovery in 2013. Lane spent the next several years reporting on the collection and the German government’s bungling of the case. Among other dubious decisions, German officials refused, with one sole exception, to acknowledge any moral aspects concerning the stolen artworks of dozens, if not hundreds, of persecuted families, many of whom perished in Nazi camps.

The result of Lane’s research is “Hitler’s Last Hostages,” a scrupulous account of Hitler’s abiding obsession with art and Germany’s cultural patrimony that set the stage for the Gurlitt gambit. Lane argues that Hitler’s fixation was a core element of his fascist ideology. To establish her point, she recounts his early attempt at an artistic career and the role of art and artists in the tumultuous time from World War I to the early 1950s.

Lane gives a detailed account of the team Hitler dispatched across Europe, including Gurlitt, which effectively reconfigured the history of art across the Continent. Wielding the label of “degenerate art” as a cudgel, Hitler and his henchmen ruined the careers of significant artists, sending them into exile or to their deaths, sometimes by suicide. (Lane notes that many of these “degenerate” artists now command the world’s highest auction prices.) In an especially long aside, Lane details the life of George Grosz, whose career she offers as a model of moral and political engagement — one that was ultimately derailed by Nazi harassment and ended with his migration to the United States.

The narrative can sometimes feel meandering, in particular her detailed account of the art scenes of the interwar years and Grosz’s biography. What’s more, her insistence that Hitler always saw himself as an artist as much as a political leader reads as credulous to the Führer’s calculated self-presentation. But she makes a convincing, full-throated case for the German government to amend its laws and practices regarding looted property. She notes that the statute of limitations for recouping stolen art expired in 1970; that it is incumbent on families who lost property to provide documentation (a near impossibility for many); and that laws and systems to encourage restitution are feeble at best. “The prevailing German attitude was that the Holocaust should be remembered annually in speeches and ceremonies, but its victims should let go of hope that they would recover stolen property,” she writes.

In spite of Germany’s official stance of Wiedergutmachung, or restitution, Lane laments that German government policy regarding stolen property remains insufficient and, indeed, unimproved since the Gurlitt scandal surfaced. “Until Hitler’s Last Hostages are acknowledged, freed and returned,” she concludes, “the moral stain of the 1930s and 1940s remains in Germany.”

Anna Altman is a contributor to The New Yorker and other publications.