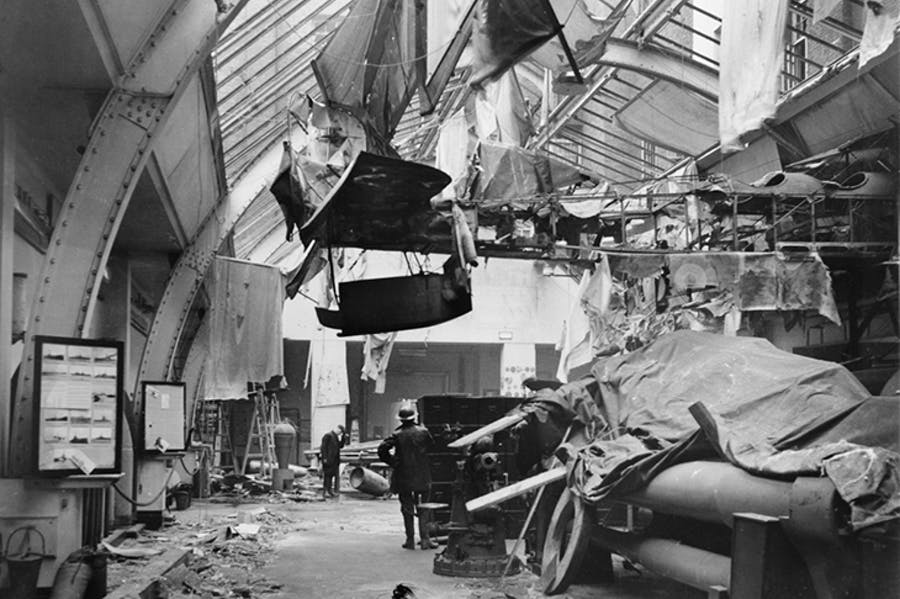 Britain’s museums hold a troubling inheritance from the 19th century, a period in which British troops captured cultural property and razed entire cities to the ground. Objects such as the Maqdala Treasures, seized in a military campaign against the Ethiopian Emperor Tewodros II in 1868, now sit in the galleries and storerooms of the British Museum, the British Library and the Victoria & Albert Museum. They may no longer be displayed proudly as trophies of war, but there are increasingly pressing calls for their repatriation.

It was not so long ago that museum directors in Britain feared that their own collections, and the buildings erected to house them, would fall victim to looting and destruction, as the thought-provoking three-part exhibition, ‘Culture under Attack’, at the Imperial War Museum in London (until 5 January 2020), reminds us. The museum was established in 1917 to preserve the memory of the First World War, and the exhibition takes this conflict as its starting point. ‘Culture under Attack’ tells the story of the targeting of culture in modern times – from the paintings that the IWM evacuated at the outbreak of the Second World War (in ‘Art in Exile’) to charred book fragments recovered from a mosque in Kosovo (in ‘What Remains’). (A third section explores the uses of music.)

As German troops invaded Poland in 1939, curators across the UK rushed to secure their most valuable possessions, seeking to protect them not only from the German bombers that would soon offload their deadly cargo across Britain, but also from the seemingly credible threat of a full-scale Nazi invasion of the British Isles. Priceless artworks were transported for safekeeping to slate mines, underground tube stations or to the remote country houses of wealthy trustees – a rescue mission motivated by the precedent of the First World War. In August 1914, invading German troops had set the city of Leuven in Belgium ablaze in reprisal for an alleged attack by guerrilla fighters. In Britain, propaganda posters and postcards condemned the Germans for their ‘barbaric’ destruction of the city’s university library, hinting that the Kaiser’s troops might do the same if they crossed the Channel. 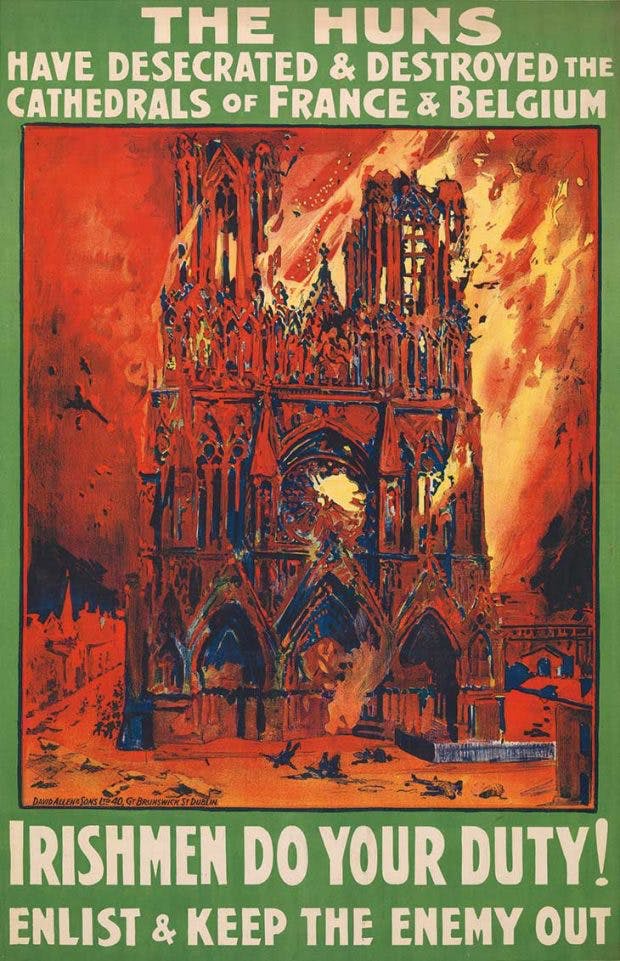 The Huns Have Desecrated and Destroyed the Cathedrals of France and Belgium (1915), poster printed by David Allen and Sons Ltd. Imperial War Museum, London

In 1939, this fear was still fresh in the minds of the British museum workers tasked with moving artworks to safety: they were equipped with ‘trench clubs’ from the First World War, so that they would be able to defend their precious cargo against opportunistic criminals. The shattered fragments of the stained-glass windows of Coventry Cathedral on display here are a powerful reminder of Britain’s cultural losses during the war, but the country was of course spared from Nazi art-looting operations, such as the Einsatzstab Reichsleiter Rosenberg. The exhibition includes meticulous inventories and photo albums that record the theft of Jewish collections and betray the self-confidence of the art experts in Nazi uniforms who oversaw the looting; actions which went hand-in-glove with the expulsion and murder of European Jews.

In 1943, when the tide of war began to turn in the Allies’ favour, they issued the London Declaration to express their determination to defeat the Nazis and to recover and return everything that had been stolen in the name of the Reich. Among the members of the unit known as the ‘Monuments Men’ were various art historians, including Britain’s John Hayward, who was responsible for the restitution of the Jewish libraries which the Nazis had confiscated for the party’s ‘think-tank’.

In spite of an enormous post-war effort, many pieces were never restituted and ended up in private and public collections all over the world. Britain was no exception to this fact and, almost 75 years after the end of the Second World War, UK museums are still wrestling with its legacy. ‘Culture under Attack’ includes a drawing by the Dutch artist Allaert van Everdingen, which the British Museum had received from a private donor in 1997. The museum was unaware that this piece had once belonged to Michael Berolzheimer and his wife Melitta, who were forced to flee Nazi Germany in 1938. The Holocaust Claims Processing Office brought this, and the drawing’s forced sale at auction in 1939, to the attention of the British museum. In 2014, the museum reached an agreement with the Berolzheimer heirs that enabled the drawing to remain in London. 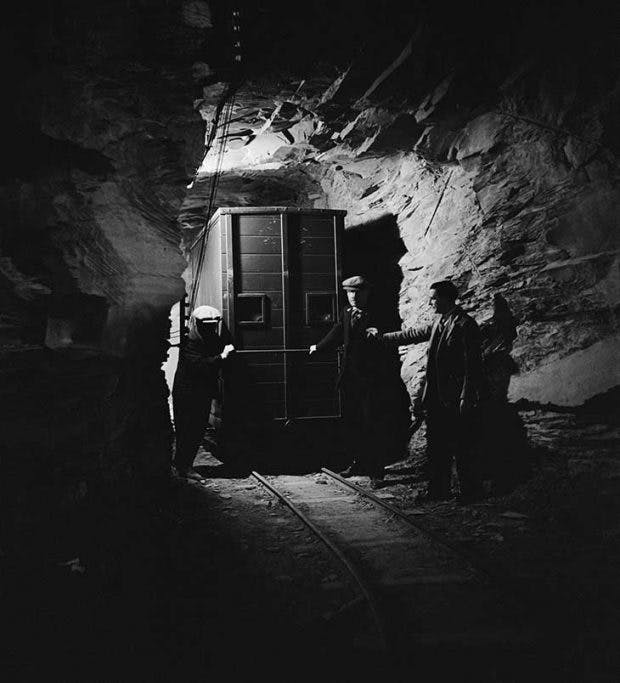 A painting from the collection of the National Gallery in transit at the Manod Quarry slate caverns, Merionethshire, Wales, in September 1942.

The exhibition honours the memory of the Syrian archaeologist Khaled al-Asaad, who was murdered by ISIS when he refused to disclose the location of priceless artefacts in the ancient city of Palmyra. A shocking comparison of Palmyra from before and after the conflict reveals the scale of the destruction wrought by ISIS, whose members also feature in video footage from the Mosul Museum, where we see them toppling sculptures and using sledgehammers to destroy pre-Islamic artefacts. The footage was intentionally created as a propaganda tool in the same vein as the controlled explosion of the Buddhas of Bamyan by the Taliban – a declaration of a war of cultural annihilation.

ISIS not only destroyed cultural heritage sites in Syria and Iraq, but also ran its own antiquities department that sold looted artefacts to foreign buyers, raising funds to facilitate the group’s reign of terror. The exhibition presents the ‘red lists’ which curators now use in order to recognise such materials so that they can be prevented from entering museum collections and be returned to their place of origin. The V&A has its own Culture in Crisis programme, which works with law enforcement, NGOs and communities around the globe which have suffered cultural losses. Recently, the British Museum helped to identify and facilitate the return of Buddhist sculptures which had been beheaded by the Taliban and were intercepted at Heathrow airport.

Considering modern Britain’s remarkable efforts in the field of cultural protection during and after the Second World War, the elephant in this gallery is clearly the cultural property seized by British troops in the 19th century. ‘Culture under Attack’ encourages visitors time and again to contemplate how they would feel if Britain had been invaded in recent times and its national treasures pillaged. The outcome of this thought experiment (if it is even necessary) can only be that the Maqdala Treasures and other objects taken by force some 150 years ago should not only be accessible to audiences in Bloomsbury and South Kensington, but also in their countries of origin. 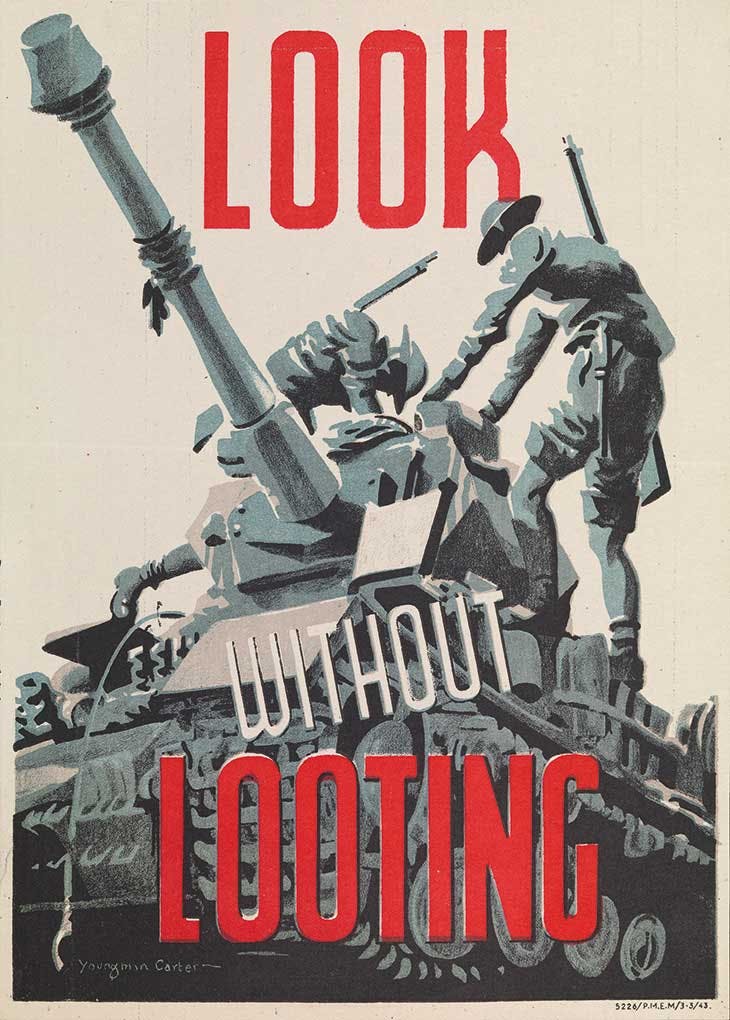 Jacques Schuhmacher is the Rosalinde and Arthur Gilbert Provenance and Spoliation Curator at the Victoria and Albert Museum, London.

‘Culture under Attack’ is at the Imperial War Museum, London until 5 January 2020.