Foreign Minister Heiko Maas has hand-delivered "Vase of Flowers" by Jan van Huysum. It was stolen from the gallery in Florence by a German soldier in 1943. 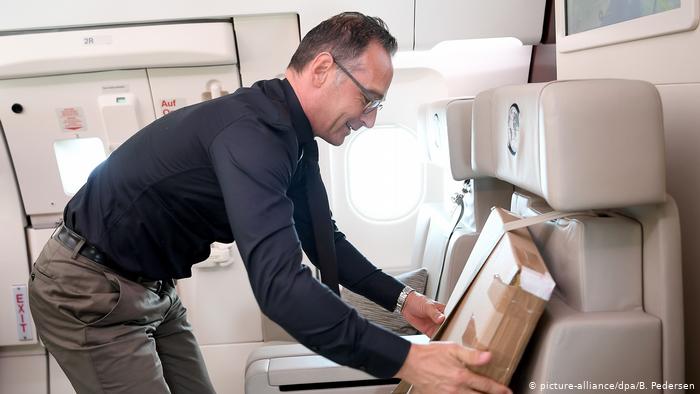 German Foreign Minister Heiko Maas was in Florence on Friday to return a painting once looted by the Nazis. The still life "Vase of Flowers"by Dutch Baroque painter Jan van Huysum was stolen from the famous Uffizi Gallery by the Wehrmacht in 1943.

Maas spoke of a "happy ending to an involuntarily long journey," alongside his Italian counterpart Enzo Moavero and Italian Culture Minister Alberto Bonisoli. The German diplomat also emphasized the "deep friendship between Germany and Italys that has grown over many years."

Uffizi Director Eike Schmidt, who is also German, thanked Maas for his "constant, sometimes spectacular plea for the return of this artwork."

"Vase of Flowers" had been in the Uffizi for more than a century at the time the Wehrmacht soldier stole it during the Allied invasion of Italy. It was lost for decades until the soldier's descendants tried to sell it through a London auction house in the 1990s.

Schmidt launched an appeal to have the painting returned to the gallery in January, hanging a reproduction in the museum marked with the word "stolen" in Italian, German, and English.

At the time, the gallery director said that the theft showed "the wounds of the Second World War and Nazi terror are not yet healed ... Germany has a moral duty to return the works to our museum and I hope this will be done as soon as possible, along with every other work of art looted by the Nazi army."

While much of the art plundered by Nazis has been returned, every few years new troves are discovered, bringing up old debates over provenance and ownership.

In 2012, one of the most famous troves was discovered in the Munich home of the late Cornelius Gurlitt. The collection included more than 1,000 pieces of artwork, many of which had been looted and then sold to his art dealer father, Hildebrand Gurlitt.

The collection, which includes work by Marc Chagall, Claude Monet, Henri Matisse, August Rodin, and many other famous artists, has now been accepted by the Museum of Fine Arts Bern, in Switzerland.