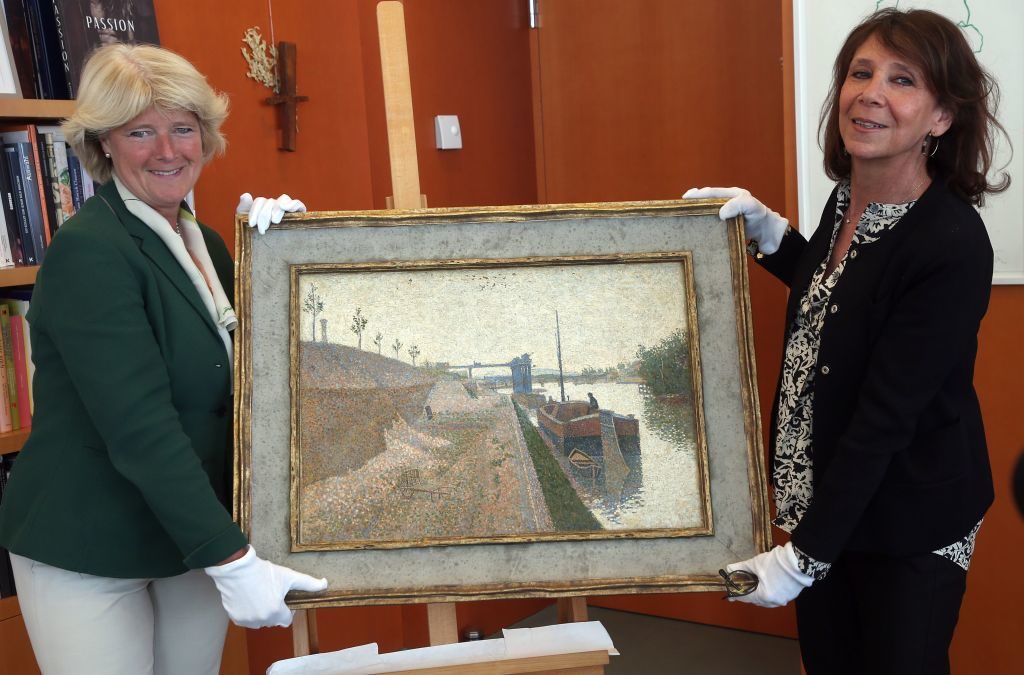 Germany has returned a painting looted by the Nazis that had been hoarded by Cornelius Gurlitt, the son of a notorious art dealer who traded in stolen works from occupied France during World War 2.

Paul Signac‘s Quai de Clichy. Temps gris is the latest painting from the vast trove of 1,500 works to be returned to its rightful heirs. A representative of the family of the French real estate broker and art collector Gaston Prosper Lévy received the work at an official ceremony on Wednesday, July 3.

Levy, who was Jewish, had to flee France in 1940. There are eyewitness accounts describing German soldiers seizing the Signac work from Levy’s castle south of Paris that same year.

“A countless number of mostly Jewish collectors of art and cultural objects, such as [Lévy], were persecuted, robbed, or expropriated by the National Socialists,” said Germany’s culture minister Monika Grütters. “Others had to sell their property far below its value, or leave it behind when they fled or emigrated. This suffering and injustice can never be rectified,” Grütters said. The painting’s return gives “at least a little bit of historical justice,” she added.

Lévy, who was an avid collector of the post-Impressionist artist, purchased Signac’s landscape from a Parisian gallery in 1927. When Lévy and his wife fled to Tunis, his collection was moved to their second home; the Nazis seized it a few months later. The work was eventually purchased by the dealer Hildebrand Gurlitt, who worked with the Nazi regime after 1938, buying art for himself, as well as for Adolf Hitler’s planned art museum in Linz, Austria.

Seven out of the 1,500 artworks in the Gurlitt hoard have been identified as Nazi-looted art by the German Art Lost Foundation. The Signac handover marks the sixth return so far. The art hoard was uncovered in 2012 in properties in Munich and Salzburg owned by Cornelius Gurlitt after a police investigation for possible tax evasion.

The uncovering of the long-hidden artworks made headlines around the world, as did Gurlitt’s surprise decision to bequeath it to the Kunstmuseum Bern in Switzerland shortly before his death in 2014. The Swiss museum and German authorities have been collaborating on the painstaking task of researching at least 500 of the items’ provenance.

In 2017, two extensive exhibitions called “Gurlitt: Status Report” opened in Bonn, Germany, and in Bern to present works from the collection to the public for the first time.

“Often it is a long and time-consuming journey,” Grütters said. “But we will not let up in consistently advancing the reappraisal of the Nazi-related art theft. We owe this to the victims of the National Socialist reign of terror, and their descendants.”