A Wartime Loss from Wrocław on the Wall of a German Museum! 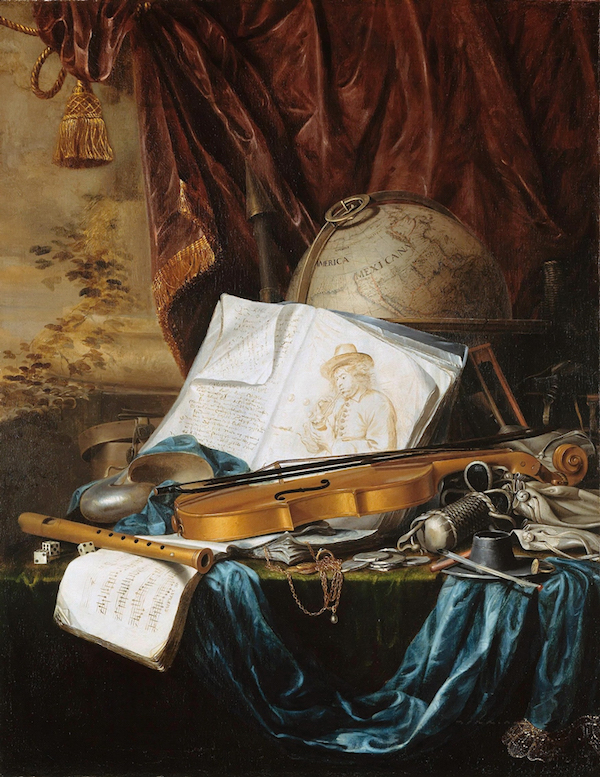 The aggravating bomb raids of German cities conducted by the Allied air forces starting from the bomb raid of Berlin in August 1940 triggered the authorities of Third Reich to implement a broad-scale action aimed to secure and evacuate the most valuable museum collections to provincial areas, to formerly specified locations considered safe from bomb raids. These criteria were met by, among others, Lower Silesia.(1)

Under the supervision of professor Günther Grundmann, the head monument conservator in the Lower Silesian province, in several tens of towns and cities museum collection depots were created where thousands of art pieces were transported to, mainly from Wrocław but also from private and museum collections from Berlin.(2)  One of such storages located in premises of a former Cistercian monastery was Henryków (Heinrichau), Ząbkowice District.(3) In May 1942, the first transports with art collections from the Silesian Museum of Fine Arts in Wrocław (Schlesisches Museum der Bildenden Künste) (4) were transported there. Among them, there was also a still life by a Dutch painter Pieter de Ring. (5) The painting is listed in the database of Polish wartime losses under reference number 11116.(6)

It all started with ArtSherlock (7) and a positive verification of a painting made using the said application. The application user remains anonymous yet based on the colour photo automatically sent to the system one could conclude that it was made from a computer screen. With a little luck, locating the original piece was just a matter of time. With little effort, yet with disbelief, I managed to determine the current location where it is stored. Contrary to the most pieces of art regarded as wartime losses that have been identified and found to date, the painting has not been offered on auctions. Admired every day by hundreds of visitors, described and reproduced in the subject literature, it is hanging on the wall of one of the key museums in Europe, as part of one of the largest painting collections in the world – in Gemäldegalerie in Berlin! (8) 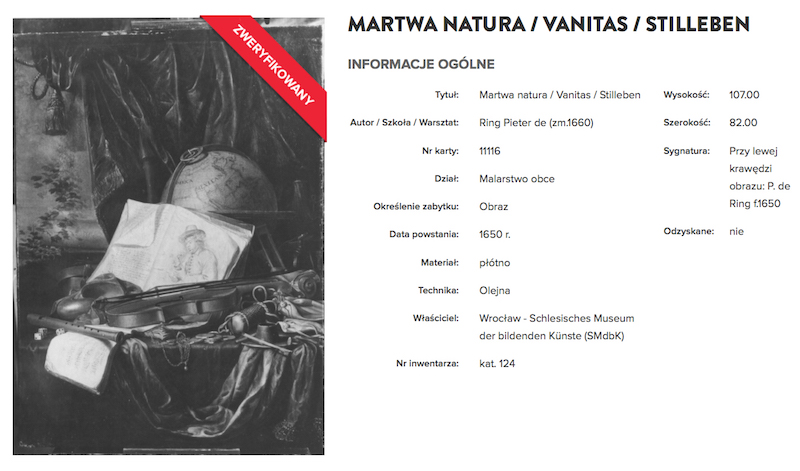 Inventory card of the painting. Photo by dzielautracone.gov.pl

Here, it should be stressed that in the case of art pieces taken from West Lands, when located within the borders of Poland and “owned before the war by the state and local authorities and other public institutions, as well as private individuals who left them when left for Germany”, Poland has a legal title specified by international legislation. (9) Therefore, one may demand that they are returned. In recent years, on this basis the following painting, among others, were successfully recovered: Jacob Jordaens’s Saint Ivo Caring for the Poor, Oswald Achenbach Pilgrims on the Via Cassia, Rome, the miniature Portrait of a Lady by Aimée Zoe Lizinki de Mirbel and Robert Śliwiński’s painting Street with Castle Ruins. All these pieces were part of a collection owned by the Silesian Museum of Fine Arts in Wrocław before to war. (10)

Until 1883, Still life by Pieter de Ring was located in Gemäldegalerie in Berlin (no. 918).(11) In May 1884, it was transferred to the collection of the Silesian Museum of Fine Arts in Wrocław (cat. no.124). (12) The painting is classified to a moralising trend that was highly popular in the 17th century Dutch painting, whose most complete expression were still life pieces referred to as vanitas (Latin for vanity). By means of rich vanity symbolism, they led the observer into a world of concealed meaning and allusions, reminding of the fleeting nature of human existence when faced with death, warned against the world of temptations and fleeting pleasures, encouraging the viewer to engage in a deeper reflection on life.(13)

This is the world of allusions we see in Pieter de Ring’s painting. On a table covered with a green fabric and pale blue shawl, the painter presents various objects lying in an arrangement that seems chaotic: a globe, a manuscript with a drawing of a man blowing bubbles, a so-called nautilus shell, musical instruments, dice, notes, a tobacco case, coins, a demijohn, an inkpot with a feather, a seal signet, a handful of golden coins and a ring entangled with a golden chain with a pearl. The composition is complemented by dark-brown drapes hanging on the background of a sky lit with the last rays of setting sun. Behind it, a hardly noticeable fragment of a shattered column emerges, golden-grey half-dead vine leaves cascading down.

The key to understandin g the meaning and the message of the entire painting is the motto memento mori (Latin for “remember about death”), placed by the painter in the very centre of the composition on the next page of the manuscript with the drawing of a man blowing bubbles.

There is not much known about the life of Pieter de Ring (1615/1620-1660).14 He was a still life painter. He was born in Leiden or Ypres in Flanders, as some sources claim. He is said to be an apprentice of Jan Davidszoon de Heem, yet there is no evidence to support this. However, he must have had encountered de Heem’s works, since the latter’s influence is noticeable in some of Ring’s early paintings. He was one of the co-founders of the Leiden Guild of Saint Luke in 1648 and worked there until his premature death in 1660. He left only several tens of paintings. He signed his works both using a monogram and his name – also in the Latin version (P. Ab Annulo) or his paraphrased likeness in the form of a ring. In the ‘Wrocław’ painting, which is extraordinary in itself, we have in total as many as four signatures. The first one with a date P. de Ring f. 1650 near the left edge right above a flute. The second one is a monogram PR on the seal signet lying on the ink pot. The third one is another monogram PR on a buckle of a leather box right next to an edge of the sketchbook. This is complemented by the fourth symbolic signature: a golden ring topped with a noble gem, entangled with the chain with a hanging pearl. 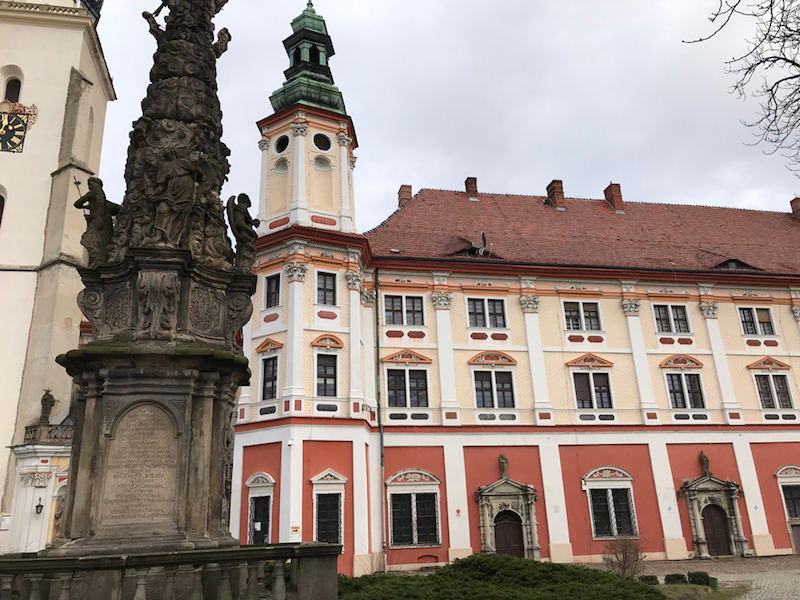 Building of a former Cistercian abbey in Henryków. At present. Photo by the Author.

As I have already mentioned, in May 1942 the painting was transported to an isolated complex of a former monastery in Henryków, less than 60 kilometres away from Wrocław. The building was the perfect place for storing evacuated collections from Wrocław museums and institutions. The vast cubature and solid structure of the monasterial building gave hope that the museum collections stored inside will be safe from the wartime turmoil. Officially, the depot was formed on 9 May 1942.(15)  With the pieces collected there in mind, “a spacious chamber and a hall on the ground floor were used along with the entire second floor.”(16)

In 1945, as part of an offensive of the 1st Ukrainian Front, the Soviet army entered Lower Silesia together with special troops, the so-called trofiejne brygady, comprised of, among others, art historians and museum professionals, whose task was to seek, take over and export to the USSR all art considered valuable.17 Soon after, all museum depots in Lower Silesia found themselves under Soviet control, including the one in Henryków. Despite the formal take-over of west lands by Poland, the Soviets stationed in Henryków until February 1946 r,(18) when the Soviet command office allowed delegates of the Poland’s Ministry of Culture and Art to take over museum collections remaining in the depot.(19) Nonetheless, by that time they had already taken the most valuable part of the collection to the USSR,(20) including Pieter de Ring’s Still Life.

Owing to the formation of the Soviet-dependent German Democratic Republic in 1949, some spoils of war transported to Russia from the German territory by Soviet troops could be returned. Also those which were taken over from depots in Lower Silesia, and which legally should be brought back to Poland. In the years 1955-1958, various museums and institutions in East Germany received about 1.5 million (!) art pieces.(21) No other state in Europe, including Poland, has received as part of post-war restitution from the USSR a greater number of art pieces than the one that was returned to East Germany at the time! One of the pieces received at that time was Pieter de Ring’s Still Life that currently can be found in Gemäldegalerie in Berlin.

Therefore, what chance does the looted painting stand to be returned to the Museum in Wrocław after these years? It seems that as for now, no one can give a rational answer to this question. One thing is certain, namely, retrieving this particular piece may prove quite a challenge due to its origin, and it will undeniably be another difficult efficiency test for state institutions formed to restitute art looted as a result of the last war. Time for diplomacy. As for us, we can only bide our time.

Mariusz Pilus - Founder and President of the Communi Hereditate Foundation dealing with provenance research in the field of polish war time losses. Independent researcher, bibliophile, collector. Creator/developer of the ArtSherlock Mobile Application which allows automatic recognition of the paintings looted during the World War II from the Polish art collections. The App is using the electronic data base of polish wartime losses provided by the Ministry of Culture and National Heritage in Poland. Author of numerous articles devoted to the problems of war losses, editor of the online ArtSherlock Magazine blog.