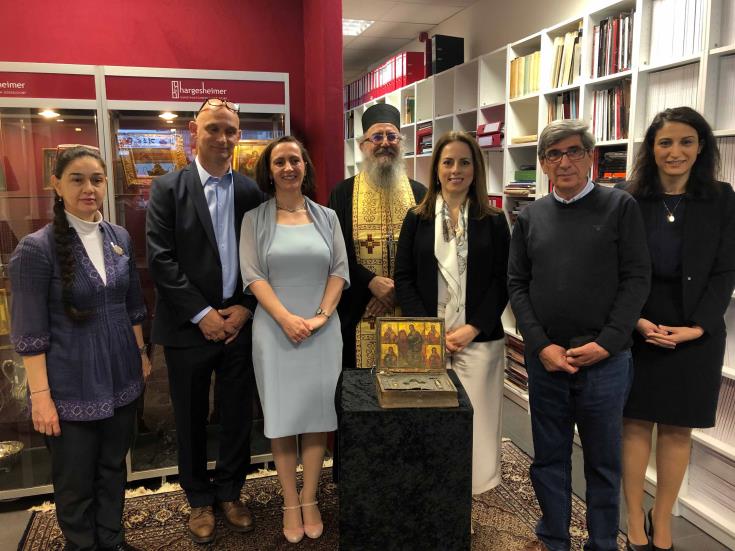 A looted reliquary from the church of Saint Mamas in the Turkish occupied town of Morphou, was handed over on Tuesday in Düsseldorf, Germany to its rightful owner, the Metropolis of Morphou and returns home on Wednesday.

The casket with the relics of saints was bought recently by the Managing Directors of Hargesheimer auction house, Susanne and Frank Hargesheimer.

The art historians decided to buy it and return it to the Metropolis after the artefact was withdrawn from an auction on April 12, despite the interest shown from several bidders, following an email by Cypriot art historian and Byzantine art expert Maria Paphiti, who informed them, at the request of the Metropolis of Morphou, of its origin and history.

The reliquary was handed over by Susanne Hargesheimer to a representative of Metropolitan of Morphou Neophytos, Archimandrite Fotios Ioakeim  during a ceremony held at the Hargesheimer auction house, in the presence of Paphiti and representatives of the Embassy of Cyprus in Germany and Cyprus’ Department of Antiquities.

Speaking to CNA after the ceremony, Archimandrite Fotios expressed his satisfaction over the fact that the reliquary returns at last to its rightful owner.

He noted that on Wednesday afternoon a short welcoming ceremony, attended by Metropolitan Neophytos, other clerics and people will be held at the Metropolis of Morphou situated in Evrychou village, in Nicosia district, after the Turkish invasion of Cyprus in 1974.

Moreover he said that the artefact will be preserved by experts and will be kept at the Metropolis, until the occupation of Cyprus is terminated and they can place it again at Saint Mamas church where it belongs.

Archimandrite Fotios also said that after the casket is preserved a mass will take place at Saint Afxidios church in Astromeritis village, near the buffer zone and Morphou, during which the  Metropolitan of Morphou will honour those who contributed to its repatriation.

Meanwhile, speaking during the ceremony at the auction house in Düsseldorf, Susanne Hargesheimer, said that stolen artefacts that have been sold abroad may never been recovered, and that it is important that such items can be identified and be returned to their rightful owners.

She noted that the casket was withdrawn from the auction due to “the quick action of the internationally well known specialist of Byzantine art Mrs Maria Paphiti, who contacted us during the auction to have the lot withdrawn, much to the disappointment of all the bidders.”

It was only her email that reached us during the auction that made us withdraw the piece from the sale, she said.

She also noted that following the Turkish invasion of Cyprus this piece along with many other pieces of art was illegally removed and sold abroad and that unfortunately the heir of the deceased icon collector from northern Germany who consigned the object to the auction had been unable to trace its journey to Germany and its prior history due to the lack of documents.

Hargesheimer said that she and her husband decided to buy the casket, compensate the consigner and donate the item to its owner, the Metropolis of Morphou.

I am so delighted to return this piece of art that is so important for the cultural identity of the people of Cyprus so that it can return home after its long journey, she said before handing it over to Archimandrite Fotios .

The casket has the form of a leather bound book. The lid opens to reveal in the centre St Mamas riding a lion, surrounded by four saints. The box is believed to contain relics of the portrayed figures, as well as of other saints. The relics are fastened on a metal plaque, which is engraved with the date 1835.